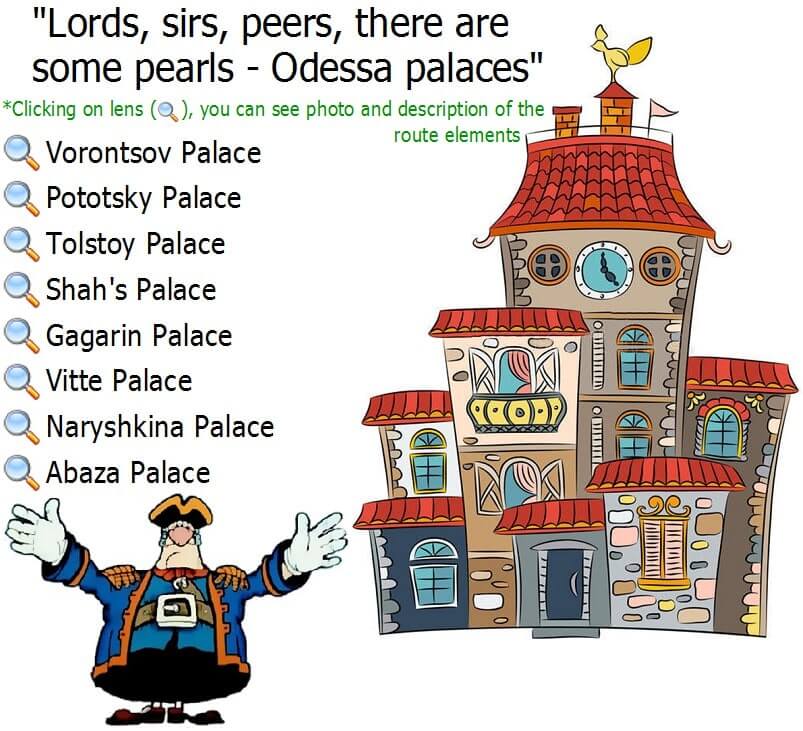 We invite you to join our excursion – Palaces of Odessa. During our tour you will see some of the most beautiful mansions that have survived to this day. This is the Vorontsov palace complex, the Tolstoy mansion, the Shah’s palace and other historical buildings that belonged to the elite of Odessa in the 19th century. It’s a walking tour along the central district of the city. Duration – 2-2,5 hours. 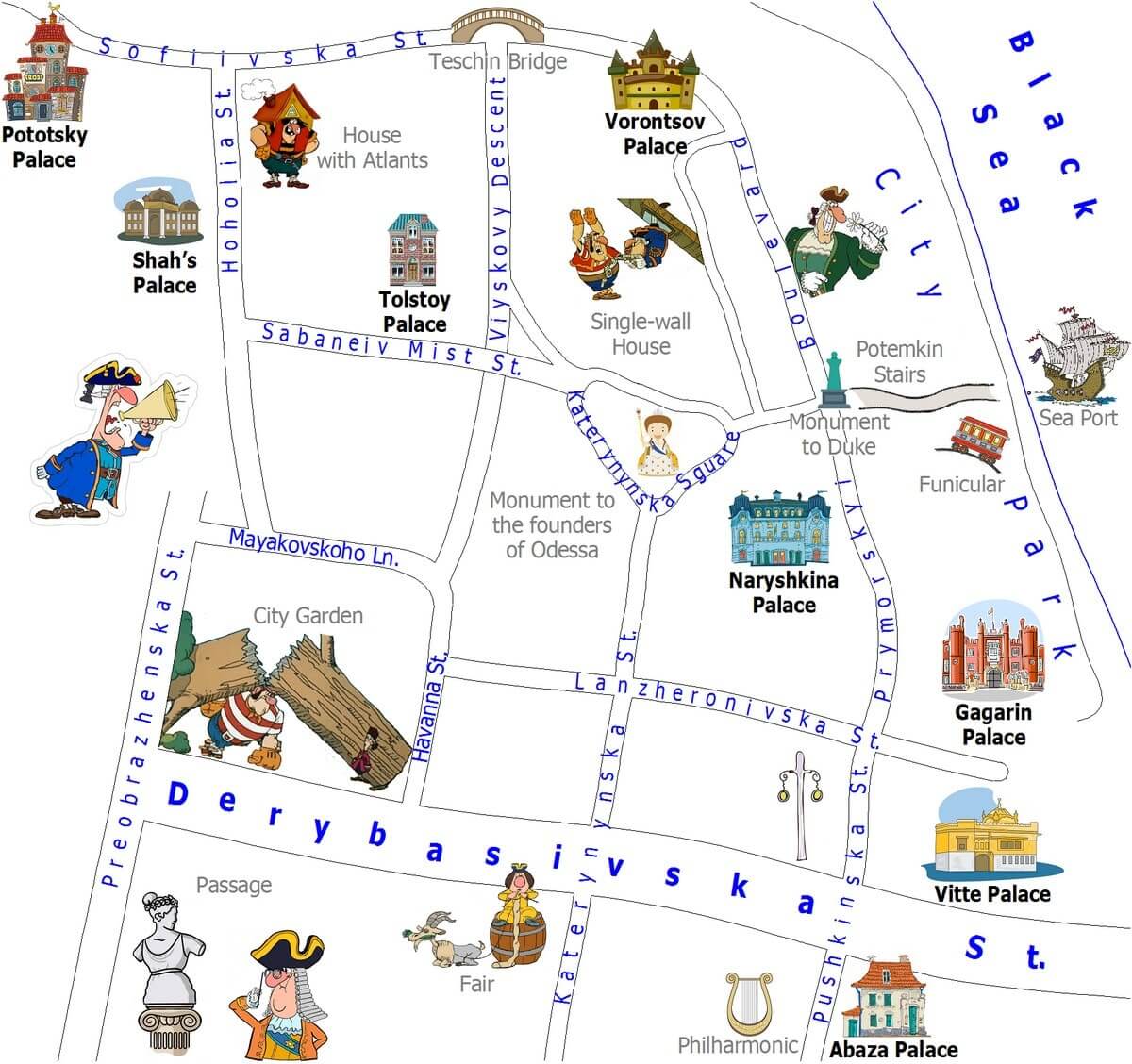 Since the 1820s, Odessa began to actively build up and develop as a seaport city, becoming the main trading center of the south of the country. The rapid pace of development has attracted the attention of many noble aristocrats and rich people from all over the empire. In prosperous Odessa or “Southern Palmyra”, as it was poetically nicknamed, estates, mansions, apartment buildings began to appear. Architecture in the central part of the city is especially saturated with aristocracy and grandeur. Many buildings have survived to this day.

The palaces of Odessa delight with their grace and luxurious decoration, as well as with a variety of styles and architectural solutions. The palace buildings are presented in the style of empire, baroque, neo-gothic, eclecticism and renaissance. Palaces of Pototsky, Tolstoy, Vitte, Vorontsov and Shah’s are rightfully called masterpieces of architecture. Each building has its own story, its own legends and secrets. Thus, for example, if you look carefully, on the facades of buildings, you will find signs or messages encoded in moulding and symbols left by architects. During our tour, we will try to decipher some of these messages.

Interestingly, some Odessa mansions have their own basements. Not just basements – whole dungeons! One of those is located under the palace of Prince Vorontsov. A 140-m long tunnel once connected the building with utility rooms and a stable. The underground corridor, built at the beginning of the 19th century, is today an object of cultural heritage of local importance.

The Pototsky Palace, which served as a residence, is interesting not only as a monument of architecture. Since 1899 till today it housed the Art Museum. Under the main building there are several galleries and cellars. One of them has got an underground grotto – the only one available for visiting. You can get into the cave within a guided tour where you will see all the beauty of a unique grotto of its kind, as well as learn the history of the Naryshkin-Pototsky mansion and family.

The Tolstoy city estate is one of the few palace complexes where the original interior is still preserved. The living rooms of Orekhovaya, Silk and Marble are especially striking in their rich decoration. A number of scenes of the famous Soviet movie “D’artanyan and the Three Musketeers” were shot in the count’s rooms. Now it houses the House of Scientists. To get inside, you must pre-book a tour. You will see not only luxurious halls, but also antique furniture, a fireplace, mirrors in openwork frames and an original piano by K. Schroeder. The Tolstoy Palace is the place where you can immerse yourself in an aristocratic atmosphere and feel the spirit of Odessa of the XIX century.

Of course, this is not the whole list of palace buildings worth of attention. During the tour, on our route there will also be the mansions of Prince Gagarin (since 1977 – the Literary Museum) Count Abaza (Museum of Western and Eastern Art) – the first honorary citizen of the city and other historical sites. We will talk about the fate of famous owners, debunk myths and reveal the secrets of their homes. 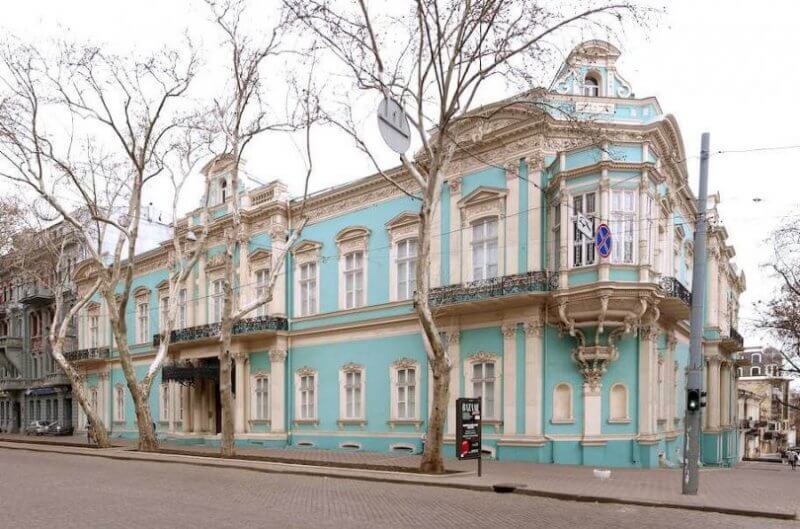 Abaza Palace – an architectural monument, erected in 1858 (Pushkinska str., 9). Count Abaza, a descendant of the noble family, once was the mayor of the Poltava province. The mansion was built in eclectic style and served as a venue for balls. The interior of the palace impresses with its rich décor: the lobby with a grand staircase made of marble, stucco molding, carved doors and parquet made of precious wood. Today it houses the Museum of Western and Eastern Art. 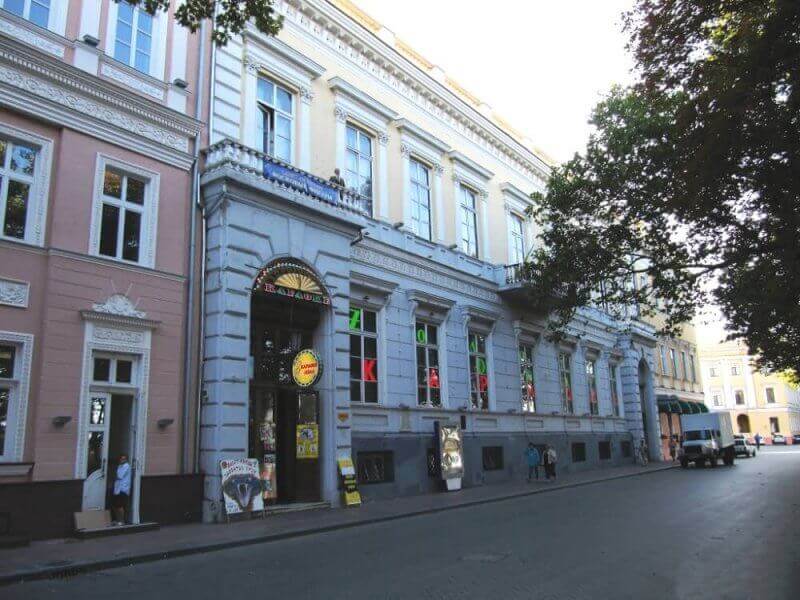 Naryshkina Palace – an architectural monument, erected in 1829-1830 and commissioned by landowner Shydlovski (Prymorsky Blvd., 9). After some time the mansion passed into the possession of Countess Naryshkina. However already in the 1860s the building was bought by the city authorities under the residence of the governor-general, and afterwards – by the commander of the military district. With the advent of Soviet force, the mansion was occupied by the CEC of the Soviets of the Romanian and Black Sea Fleet, and since 1924 – by the Palace of Seamen. In 1952, having completed two outbuildings to the building, they made an inner courtyard, where they opened a summer cinema. The main staircases, the Winter Hall, decorated with rich moldings and frescoes on the walls, have survived to this day. Today here is also the Odessa Palace of Seamen. In the warm season an open-air cinema operates here. 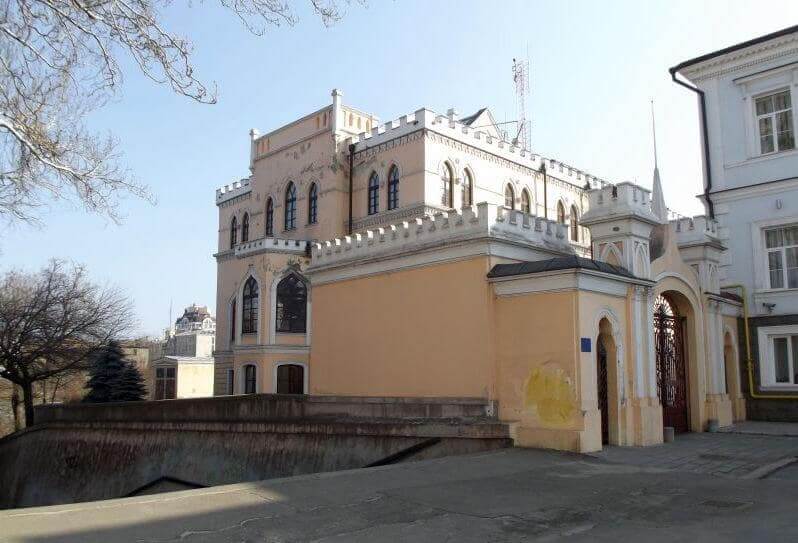 Vitte Palace – a mansion built on the slope of Quarantine gully supposedly in the 1830s. (Langeronivska str., 1). Count Jacob de Vitte is the General of the Russian cavalry and one of the main figures of intelligence in the war of 1812. The palace was erected in the neo-Gothic style and is a building with turrets resembling a medieval castle. At the end of the XIX century the mansion was transferred to the Russian society of shipping and trade, and afterwards – to the Black Sea Shipping Company, which has remained here until today.

Gagarin Palace – was erected in the 1840s for the family of Prince Gagarin (Langeronivska str., 2). Prince Gagarin was a representative of the aristocracy and a rather remarkable figure in Odessa. The mansion, reminiscent of the castle architecture, served as a venue for receptions and balls. The building is interesting for its rich interior and spacious rooms. The Golden Hall, which has retained its original image to this day, deserves special attention. In the 1880s the building was handed over to a literary and artistic society. Today, in the former palace of the Gagarins, there is a literary museum of Odessa, founded in 1977. In addition to the mansion, the Gagarins owned a manor in the Arcadia region. In memory of this, in Arcadia there is a street called the Gagarin Plateau. 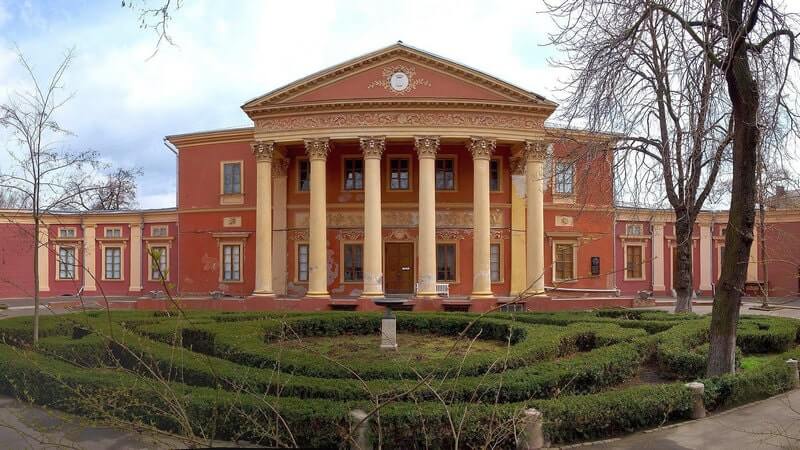 Pototsky Palace – a historical monument of architecture, built in the beginning of the XIX century. (Sofiivska str., 5-a). The owner of the mansion was the daughter of the Polish magnate Stanislav Pototsky – Countess Olga Pototsky (Naryshkina after marriage). In the 1840s the palace changed its owner, and in 1888 it was bought and transferred to the city, after which in 1899 an art museum was opened here. Today, the Odessa Art Museum is also located in the Pototsky Palace. Interestingly, there are several cellars under the building. In one of them (under the main part of the building) there is an underground grotto. You can get a guided tour there and to learn about the history of the palace. 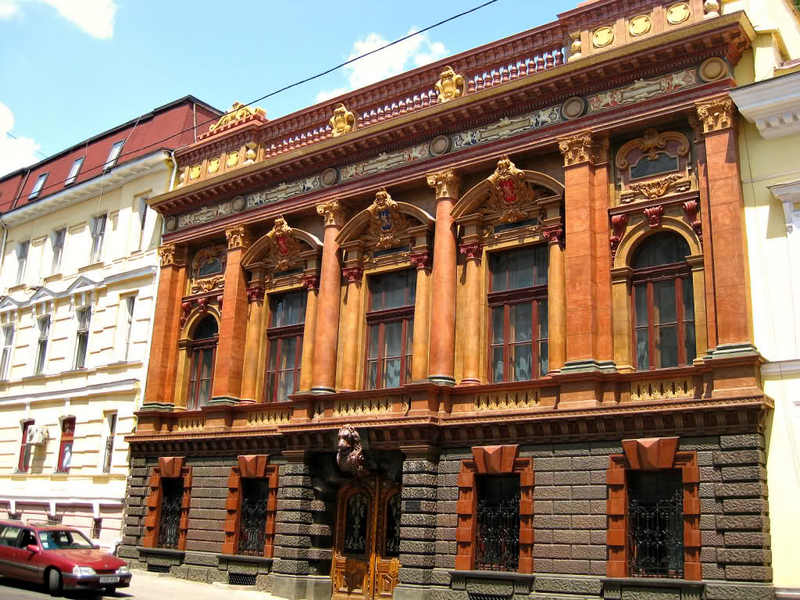 Tolstoy Palace is a mansion in the style of Russian classicism, built in the 1830s. It was commissioned by the captain Horvat (Sabaneev bridge st., 4). In the 1840s, the Odessa public figure and philanthropist Count M. Tolstoy purchased the mansion and settled there with his family. Later, a building for M. Tolstoy’s own art gallery was erected next to the mansion. In his gallery one could see the works of Goya, Velasquez, Rembrandt and other great artists. At that time, the count’s art gallery was considered to be one of the richest in the country. Subsequently, the younger son of Tolstoy donated a large part of the paintings, as well as a personal collection of books, to the city. Now the former Tolstoy mansion occupies the House of Scientists, which has been located here since 1934. Today it is an object that belongs to architectural monuments. The decoration of the mansion with its rich interior has been preserved to this day. Silk and Marble living rooms, as well as the Green Room are striking with their beauty. In the interiors of the house of Tolstoy family, some scenes of the famous Soviet film “D’Artagnan and Three Musketeers” were filmed. 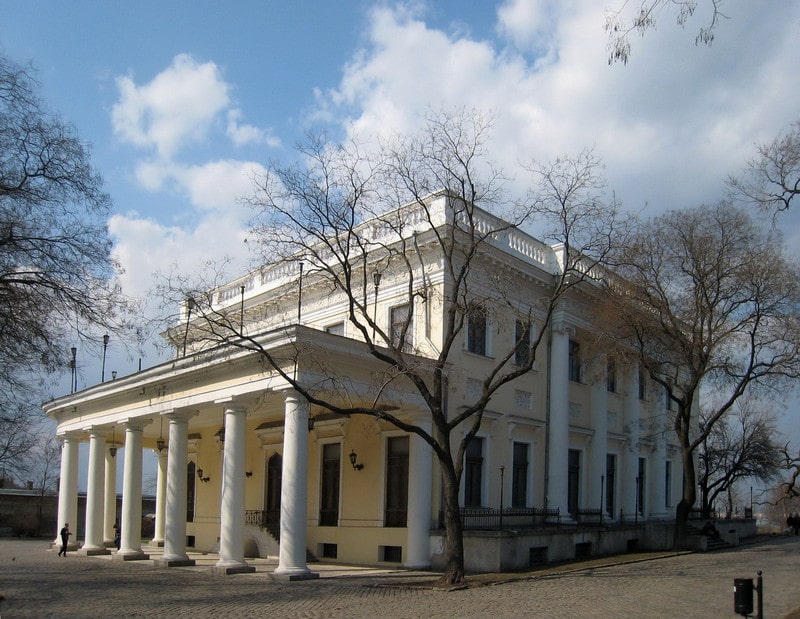 Vorontsov Palace is a monument of architecture in the Empire style, built in 1826-1828 and designed by architect F. Buffo (2 Vorontsovsky Lane). It served as a residence of the Governor-General M. Vorontsov and was a palace complex, which consisted of buildings for various purposes, separated from the city by a stone wall. Of all the buildings in the ensemble of Vorontsov Palace, only a mansion and a belvedere – the colonnade (rotunda) of two rows of the Tuscan warrant columns, erected right on the edge of the city plateau, have survived to this day. It’s a place with an amazing view of the sea terminal and the port. Also, concerts and celebrations are often held here.

Quite recently, an underground passage was discovered under Vorontsov Palace. It is located in the area of the Military gully and originates from a well in the floor of the palace basement (Vorontsovsky lane, 2). The length of the dungeon is 140 m, and its depth reaches up to 7 m. The tunnel used to connect the palace with the stable and with the outbuilding. It is believed that the dungeon could be built before the palace, when the estate of Kulikovsky was located in its place (the beginning of the 19th century). There is a version that the tunnel has remained since the days of the Turkish fortress (1760s). The underground tunnel of Vorontsov Palace has become an object of cultural heritage of local importance. 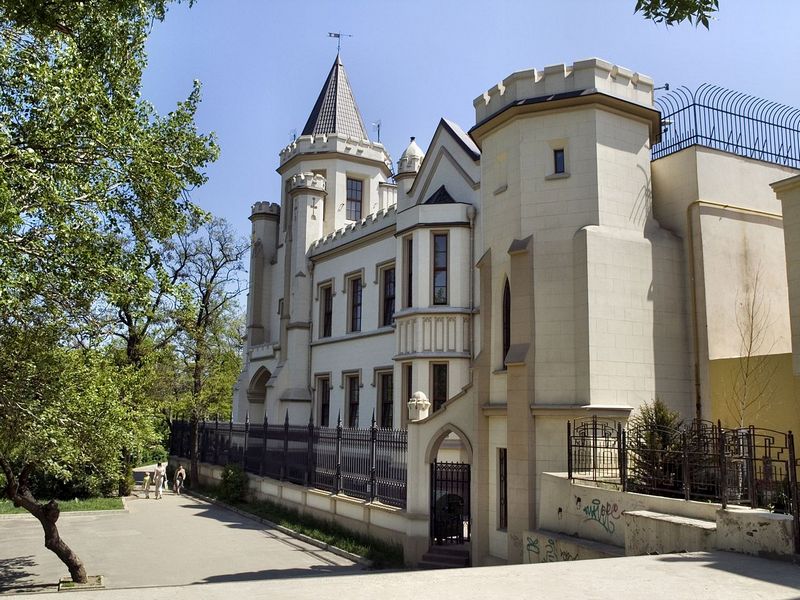 The Shah’s Palace is an architectural monument, erected in 1852 in the neo-Gothic style (Gogol Street, 2). It was built for the nobleman Brzhozovsky. In the 1880s, the palace passed into the possession of Count Schönbek. In the years of 1909-1917 in the building of the palace was inhabited by the Shah of Persia, Mohammed Ali, after which the citizens called the palace Shah. During the Soviet period, the premises were occupied by various institutions. In the 2000s, the building has been restored. Today it houses a commercial bank.