We conduct individual tours in one of the oldest cities of Ukraine, the city of churches – Chernihiv. During the tour, you will see ancient cathedrals, visit the Anthony Caves, and admire picturesque views of the city. In addition, we offer a choice of excursions to the most popular places in Chernihiv region – Baturyn, Kachanivka, Pryluky, Sedniv (see below). 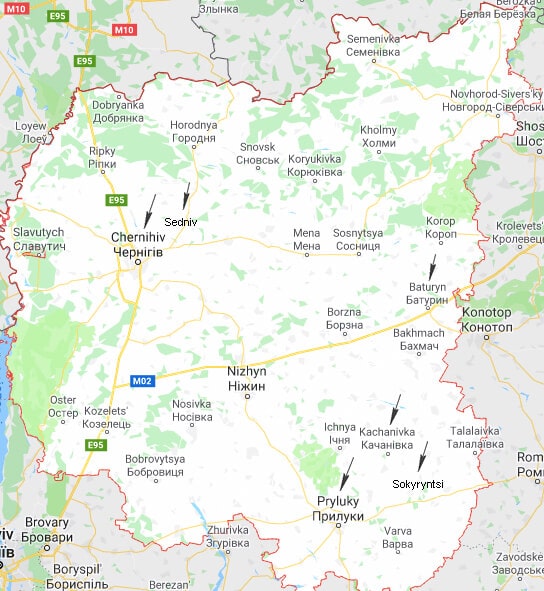 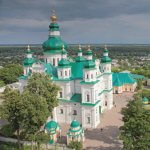 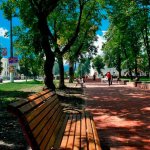 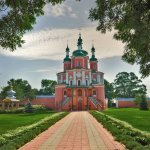 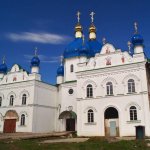 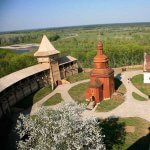 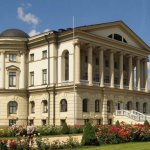 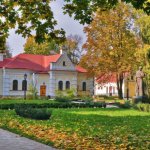 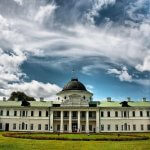 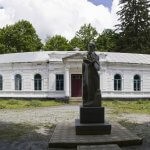 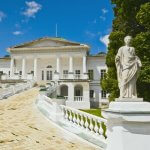 Chernihiv – one of the most ancient cities of Ukraine, located in 143 km from the capital, today it is a regional city. It was first mentioned in 907 in the “Tale of Bygone Years” as the second major city in Kyiv Rus after Kyiv. The city with rich centuries-old history has left to the present day a lot of sights and ancient shrines, wherewith annually draws to itself not only tourists, but also pilgrims from all over the Orthodox world. The most ancient historical object can be called the Princely Detynets, so-called Val, on the site of which once was a fortress. From the Val opens a picturesque panorama of the city. At the territory of Detynets the unique Transfiguration Cathedral (XI century), which was founded by Mstyslav – the son of Prince Volodymyr, have been survived to the present day. The grave of Prince Igor is located in the temple. It is also worth noting the nearby Borys and Hlib Cathedral (XII century), which was founded by Prince Davyd Svyatoslavovych. Today there is an exposition of the historical museum. Thanks to ancient caves, the Ilyinsky Monastery, founded in 1069 by the monk Anthony Pechersky, attracts tourists. At the territory of the monastery are situated three cave temples – St. Theodosius, St. Anthony and St. Nicholas. The monastery itself is located on the Boldyn Mountains, and under the monastery there are cave temples, where you can descend through the the Ilyinsky Church. Near the monastery you can see the Bezimenny and the Gulbyshche mounds, preserved from pagan times. It is necessary to say that in Chernihiv there are countless amounts of churches and cathedrals, thus, the city is rightly called the “city of churches”. Besides shrines in Chernihiv, there are many museums, monuments, parks and squares. This city will leave an indelible impression for fans of ancient history.

Pryluky – a small town in the Chernihiv region, located on the Uday River (148 km from Kyiv). The city was first mentioned in 1085, where says about the fortress, which served as the protection of Kyivan Rus from the raids of nomads. In 1459, Pryluky was considered a large city and included in the Grand Duchy of Lithuania. Already in the XIX century the city was the parish centre of Pryluky county of Poltava province. Today on the territory of all Ukraine there are 12 cities, which bear the name “Pryluky”. Pryluky in the Chernihiv region is one of the important industrial centres. There are many factories and plants. For example, in the city there is a tobacco factory of British American Tobacco, where such brands as “KENT” and “Pryluky Osoblyvi” are produced. In the Soviet times the city had a strategic importance, because it was here located the South Railway junction, as well as the 184th Guards Aviation Regiment of heavy bombers where Tu-16 planes were in service, which were capable of carrying nuclear weapons. In addition, Pryluky is one of the tourist centres in Ukraine. Until now many temples have been preserved, the main among them is the Transfiguration Cathedral of the 18th century, built with the funds of Colonel Galagan. The main shrine of the cathedral is the icon of the Sorrowful Mother. Galagan is buried himself in the walls of the temple. One of the noteworthy architectural objects can be called the House of Culture ,built in the turn of the XIX – XX centuries. In front of the building there is a monument to Ukrainian actor of theatre and cinema Mykola Yakovchenko, who was born in this city. By the way, the monument is very similar to the one installed in Kyiv near the Franko Theatre. It is impossible not to remember two shrines that are not far from Pryluky – the Gustyn Holy Trinity Convent (11 km) and the Intercession monastery of Ladan (16 km), founded in 1600.

Baturyn – a city in the Chernihiv region (220 km from Kyiv), founded in 1575 by the Polish king Stefan Bathory and named in his honour. At the beginning of the XVII century here, at the foot of the river Seim, a fortress was built, which later gave the origin of Baturyn’s story. Its importance was acquired by the city in 1669-1708, when it became the capital of the Cossack hetmanate, and the fortress – the hetman’s residence, in particular, of I. Mazepa, I. Samoilovych, D. Mnohohrishny. In 1708, on the orders of Peter I, Russian troops attacked Baturyn and destroyed the fortress to the ground. Today Baturyn attracts tourists to the Citadel of the Baturyn Fortress, reconstructed in 2008 on a historical site. A new wooden structure completely in shape and size corresponds to the destroyed original. At the territory of the fortress, defensive towers, a hetman’s house, a church, a treasure house, etc. have been reconstructed. It is worth noting one more attraction of Baturyn – the palace of the last Ukrainian hetman K. Rozumovsky, built in 1799-1803. The palace was restored in 2008, has 55 rooms, but not all are open to visitors. Around the palace is a park in which you can enjoy the beauty of roses. Also to this day, the house of the general judge V.Kochubey (the 17th century) and the Resurrection Church (1803), where K.Rozumovsky is buried, have been preserved. These object are open to visitors.

Kachanivka – a tiny village in the Chernihiv region, located in 184 km from Kyiv. This place was unremarkable and unknown until in 1771 the farm turned into the possession of count Petro Rumyantsev-Zadunaisky, who built a residence here and laid out the park. After the death of the count, the estate have replaced by not one master for 150 years, and each of them rebuilt something. So the owner G. Tarnovsky rebuilt the palace in the style of classicism, completing the second floor with a dome and ennobling the park. Here was his collection of paintings of famous Russian and European artists. Today the collection is in the Chernihiv Art Museum. G. Tarnovsky transformed the village into the centre of cultural life, inviting famous poets, writers, composers and artists to the estate. T.Shevchenko, M.Gogol, M.Glinka, V.Sternberg visited this place. Artist I. Repin spent the summer of 1880, working on the picture “Reply of the Zaporozhian Cossacks to Sultan of the Ottoman Empire.” Since 1981, on the basis of the palace and park ensemble, the historical and cultural reserve “Kachanivka” was created, and since 2001 it has been given the status of a national one. The territory of the manor in two levels (732 hectares) consists of a palace complex, two parks, 12 ponds, sculptures, bridges and “romantic ruins” in the form of an imitation fortress. It should be noted that the park is one of the largest landscape parks in Ukraine and Europe (560 hectares), has more than 50 species of trees and 30 species of bushes, the total length of park paths is 60 km. Also at the territory there is a church (1817-1828), built by one of the owners of the manor. Today it is the only estate in Eastern Ukraine, preserved in the complex.

Sedniv – the urban type settlement of the Chernihiv region (168 km from Kyiv). Interest to this small village arose in the nineteenth century, when excavations were made here, as a result of which were found burial of the retinue with spears and arrows. In fact, the burial mound existed here in the 10th century, and the first mentions are found as a town-fortress called Snovsk. In 1068, not far from this place, Prince Svyatoslav Yaroslavovych with his regiment defeated the Polovtsi (Cumans) army. In the XVII century Sedniv became a volost centre of the Chernihiv Province, during the hetman period there was a reign of centurions (sotniks). At the end of the XVII century the settlement was taken over by the Cossack family Lyzohub, who built a beautiful farm here and laid out the park. The Lyzohubs’ love to art turned the estate into a cultural centre, which made the village famous. There were famous cultural figures, among them – Shevchenko and L. Hlibov. Today, the Lyzohubs’ manor is a monument of landscape architecture of the XVII century. In addition to the manor in Sedniv, the Resurrection Church (XVII century) was preserved, where members of the Lyzohub family were buried, St. George’s Church (XVIII century) which was built without a single nail. It is interesting that a number of scenes of the famous Soviet film “Viy” took place in St. George’s Church. Not far from the village there is the river Snov, along which kayakers can be rafted in the summer. On the river is built hydroelectric power station (active).

Sokyryntsi – a small settlement in the Chernihiv region (180 km from Kyiv). Village remained inconspicuous until it passed at the beginning of the XVIII century in the property of a noble family – landlords Galahan, who have owned this estate for 150 years. Thanks to them, the village became famous. Creating its ancestral nest, the owners built a magnificent palace, as well as a wonderful park. And Galahans’ love to the art turned the estate into a cultural centre, where famous people came to visit, namely – T.Shevchenko, P.Kulish, M.Lysenko, etc. Today the estate appears before visitors with a snow-white palace and a park. It is the palace and park complex, which has historical value. In the building of the palace there is a room-museum dedicated to the famous bandura-kobzar Ostap Veresay who lived in Sokyryntsi. Veresai was familiar with the very same park, decorated with sculptures, alleys and picturesque lakes, is a monument of landscape art and includes more than 70 species of trees and bushes. Not far from Sokyryntsi (20 km) there is a small village of Dehtyari, which also belonged to the kin of Galahan (XVIII century). Here, as well as in Sokyryntsi, was built up an estate with a large palace and a park. Nowadays in the building of the palace house the agrarian lyceum and the ethnographic museum of Ukrainian life.