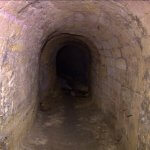 The underground passage of the Vorontsov Palace 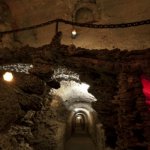 The cellars of the Pototsky Palace 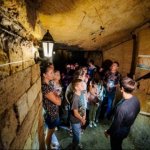 Dungeons of the Vorontsov Palace. Quite recently an underground passage was discovered under the Vorontsov Palace. It is located in the area of the Military gully and originates from a well in the floor of the palace basement (Vorontsovsky lane, 2). The length of the dungeon is 140 m, and its depth reaches up to 7 m. The tunnel used to connect the palace with the stable and with the outbuilding. It is believed that the dungeon could be built before the palace, when the estate of Kulikovsky was located in its place (the beginning of the 19th century). There is a version that the tunnel has remained since the days of the Turkish fortress (1760s). The underground tunnel of the Vorontsov Palace has become an object of cultural heritage of local importance.

Cellars of the Pototsky Palace. Pototsky Palace – a historical monument of architecture, built in the beginning of the XIX century. (Sofiivska str., 5-a). The owner of the mansion was the daughter of the Polish magnate Stanislav Pototsky – Countess Olga Pototsky (Naryshkina after marriage). In the 1840s the palace changed its owner, and in 1888 it was bought and transferred to the city, after which in 1899 an art museum was opened here. Today, the Odessa Art Museum is also located in the Pototsky Palace. Interestingly, there are several cellars under the building. In one of them (under the main part of the building) there is an underground grotto. You can get a guided tour there and to learn about the history of the palace.

Quarantine Beam Quarry – the oldest stone quarry in Odessa (1811-1814), located on the right slope of the Quarantine Beam, is a monument of national importance (Bunin str., 7). The length of the quarry is 120 m, and its depth reaches up to 15 m. Today a new museum “Kantakuzen Catacomb” is open here. The museum’s expositions will tell about the mining and furnace business, about brick production, about the first buildings in Odessa, about the history of the Kantakuzen catacomb. All exhibits are unique. The age of some surviving objects is 200 years.