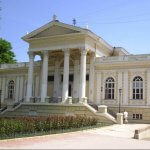 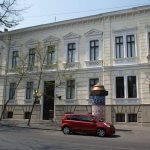 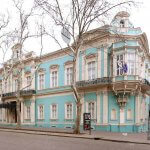 Museum of Western and Eastern Art 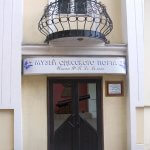 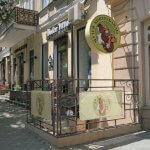 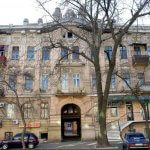 Museum of the History of the Jews of Odessa 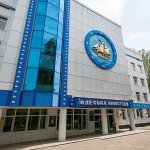 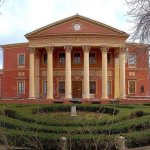 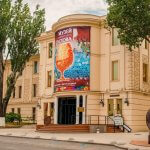 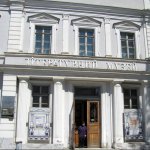 Archaeological Museum – the oldest museum in Ukraine, founded in 1825. The value of the museum is represented by a collection of materials concerning the Northern part of the Black Sea region. The fund has over 170 thousand artifacts of the history of the Southern region. Among them you can see weapons, jewelry and household items from the time of the Scythian, Tripoli and Chernyakhiv cultures. The most ancient exhibits belong to the II millennium BC. In addition, the only collection of antiquities in Ukraine from Egypt, Greece, and Cyprus is collected here. The museum building is an architectural monument, erected in 1883.
Address: Lanzheronivska str., 4
Contacts: +38(048)722-63-02, +38(048)725-63-22
Work time: Tue – Sun from 10:00 to 17:00, Mon – a day off.
In winter: Mon, Tue – closed.

Local History Museum – a museum dedicated to the history of the city of Odessa. It is located in the former Novikov mansion, built in 1876. Alexander Novikov is an industrialist from a family of hereditary merchants. In 1907 the building was rented by the Odessa Commercial Assembly. In Soviet times, various state institutions were located here. Since 1956, it has been the Odessa State Local History Museum. The museum fund is considered to be one of the best in Ukraine. Among the exhibits are documents signed by Catherine II, Potemkin, Suvorov, de Ribas and Langeron; city building projects, paintings, icons, weapons and household items of the Odessa region and much more.
Address: Gavanna str., 4
Contacts: +38(048)726-26-08, +38(048)725-52-02
Work time: Mon – Thur, Sat, Sun from 10:00 to 17:30, Fri – a day off.

Museum of Western and Eastern Art – was created in 1924. Its main value is in the works of Western European art of the XV-XX centuries, such as paintings, drawings, sculpture, porcelain, tapestries, furniture and more. Among the masterpieces kept in the museum are the works by Khals (“The Evangelist Luke”, “The Evangelist Matthew”) and Caravaggio (“The Taking of Christ in Guard”). The building itself was built in 1858 and is known as the former palace of the Count of Abaza. It is now a monument of architecture. The mansion was built in eclectic style and served as a venue for balls.
Address: Pushkinska str., 9
Contacts: +38(048)724-67-46, +38(063)-314-20-56
Work time: Mon, Tue, Thur – Sun from 10:30 to 18:00, Wed – a day off.
From October to March the museum is opened from 10:00 to 17:00.

De-Volan Odessa Port Museum – tells us about the construction of Odessa as a commercial seaport. The museum contains rare documents, maps, plans for the development of the port. In addition, the museum houses a collection of ship mock-ups that were previously stored in the Museum of the Ukrainian Navy. You can book a tour and visit the museum, as well as ride a minibus along the seaport and see its powerful infrastructure. Odessa port is not only a highlight of the city and one of its main attractions; it is also a kind of an open-air museum.
Address: Lanzheronivsky descent, 2
Contacts: +38(048)729-38-57, +38(067)812-37-43, +38(048)729-34-90
Work time: Mon – Sun. Excursions – from 14:00 to 17:00 (except Sat, Sun).

Smuggling Museum – a private museum located in the basement of an old building. Here they collected items of confiscated smuggling (mainly dummies), as well as illustrations of methods of goods’ smuggling. The museum is young because there are not so many exhibits yet. However, the collection is being constantly replenished. Among the interesting exhibits are different versions of caches for drugs, car door, etc. The museum will tell fascinating facts from the life of Odessa smugglers over the past 200 years. If you wish, you can buy a souvenir in the museum.
Address: Ekateryninska str., 6
Contacts: +38(067)483-76-93
Work time: Mon – Sun from 11:00 to 21:00.

Museum of the History of the Jews of Odessa “Migdal-Shorashim” – was opened in 2002 by the Jewish community center “Migdal” and tells about the life of Jews in Odessa. By the beginning of the XX century, Odessa ranked third in the number of cities in the world (after New York and Warsaw) by the number of Jewish population. Sholom Aleichem, Bialyk, Chernikhivsky, Zhabotynsky, Babel, Ilf, Utyosov and other prominent world-famous Jews lived and worked here. The contribution of the Jews in the history of Odessa is still significant. Today the museum is one of the most significant ones in Ukraine. The museum features photographs, books, newspapers, postcards, household items and musical instruments. This is where you can feel the spirit of multinational Odessa, known throughout the world.
Address: Nizhynska str., 66
Contacts: +38(048)728-97-43
Work time: Mon – Thur from 13:00 to 19:00, Sun from 10:00 to 16:00. Fri, Sat, Jewish holidays – closed.

Museum of Cinema – is located on the territory of the Odessa Film Studio in an old mansion and is dedicated to cinematic activity in Odessa. Here thousands of materials are collected, starting from the birth of the film studio till the present day. The exhibits include newspapers and cinema magazines from 1900, sketches of scenery and costumes, filming and recording devices, posters, and others. The Odessa Film Studio was created in 1922. Grossman, the founder of cinema in Odessa, was the first film director to be shot in 1907. He created the studio “Myrograf”, which later became the film factory. Later, the Mizrach filmmaker and the Borisov Film Factory appeared in Odessa. In 1918, a large film industry merchant Kharitonov built a filming pavilion on French Boulevard, 33. With the advent of Soviet power, all private film factories were nationalized, and the Odessa Film Factory was created on their basis. It was here that the “The meeting place cannot be changed”, “Vertical”, “Captain Nemo”, etc. were filmed.
Address: Frantsuzsky Blvd., 33
Contacts: +38(048)233-95-38, +38(048)725-03-09
Work time: the excursions are held in Tue, Wed, Thu at 15:00.

Art Museum – opened since 1899, is located in the Naryshkin-Pototski Palace. The museum presents painting, graphics, sculpture, objects of decorative art. Iconography of the 16th-18th centuries, as well as paintings by outstanding masters of the 19th century, including works by Aivazovsky, Shishkin, Repin, Levitan, Vrubel and other famous artists, are considered valuable. The Pototski Palace was built in 1828 and is an architectural monument. There are cellars under the main building, one of which has an underground grotto open to the public. You can get into the grotto by pre-ordering a tour.
Address: Sofievska str., 5-a
Contacts: +38(048)723-84-62, +38(048)723‒72‒87
Work time: Mon, Wed, Thu, Sun from 10:30 to 17:30, Fri – Sat from 11:30 to 18:30, Tue – a day off.

Shustov Cognac Museum – a museum dedicated to the history of the oldest Shustov cognac factory. Here you can learn how brandy originated in Odessa and will hear the history of the Shustovs dynasty. In addition, there will be an opportunity not only to visit the production workshops, but also to pass by the tasting room, where cognac of various collections is presented. The museum’s art bar is open on the territory, where you can have a good time enjoying a delicate taste of an exquisite drink. Finacial situation permitting, make sure you try the 40-y. o. DS Shustov cognac. At the entrance there is a shop where you can buy branded products and collectible cognacs which you won’t find in regular supermarkets. Access to the museum is by appointment only.
Address: Melnytska str., 13
Contacts: +38(048)740-08-99, +38(067)222-77-70
Work time: Mon – Sun from 10:00 to 20:00. Fixed time: 10:00, 12:00, 14:00, 16:00, 18:00.
Pre-registration is required.

Literary Museum – founded in 1977, is located in the building of the Gagarin Palace. The mansion was erected in the 1850s. It is an architectural monument. Particularly striking is the wealth of interior decoration, in particular, the Golden Hall, where creative evenings and classical music concerts are held. Among the exhibits are books, manuscripts, photographs, personal items of writers who lived in Odessa or whose work is connected with the city. In the courtyard, the Garden of sculptures of modern masters is open, dedicated to writers and their literary heroes.
Address: Lanzheronivska str., 2
Contacts: +38(048)722-33-70
Work time: Tue – Sun from 10:00 to 17:00, Mon – a day off.