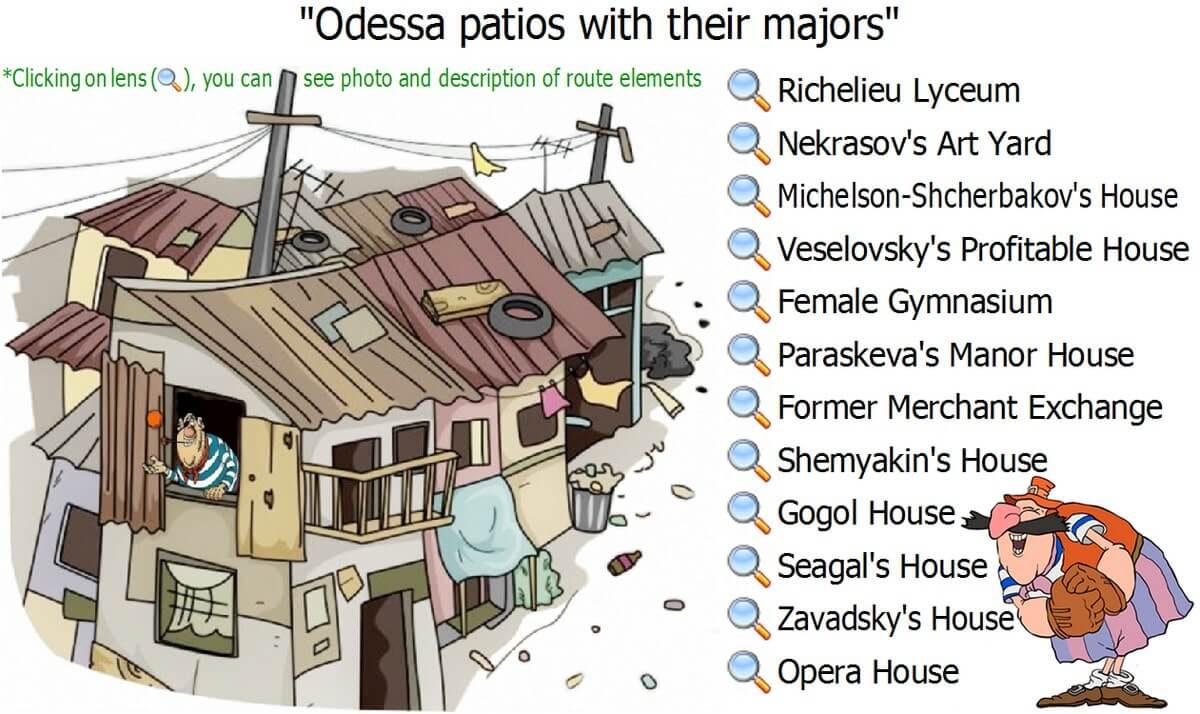 We invite you to the most popular tour – Odessa courtyards. During our tour, we will walk through those streets where you will see both luxurious houses with spacious courtyards, and courtyards with poor buildings of 2-3 floors, as well as just cozy courtyards hidden from the eyes of passers-by. You will plunge into the atmosphere, saturated with real Odessa flavor, in order to feel the spirit of the very same – Old Odessa. Duration – 2-2,5 hours.

Odessa courtyards are a unique phenomenon that exists only in one corner of the Earth. Until recently, life in such deep courtyards was quite vivid, resembling a large communal apartment, where everyone was familiar with each other, making friends and fighting, reconciling and visiting each other. Residents used to gather at the sites to start a conversation with a neighbor, discuss the latest news or listen to new gossips.

Courtyards of Odessa are a special world. It is here that the ancient molding on the arches marvelously combines with shabby stucco, and the cobblestones merge with modern paving tiles. Here, collapsing facades harmoniously connect with a modern lining, and some of them hide their cracks behind retaining walls or wild grapes. Here you will see the dwellings, equipped in the former apartment buildings, stables, janitors and outbuildings.

The main highlight is long stairs that encircle the floors. It is worth saying that some were built in imperial times, as evidenced by the brands of manufacturing factories. But there is also the Soviet era, when housing was sorely lacking, and every inhabitant of Odessa wanted to have their own island with a separate entrance and a tiny balcony. Unchanging attributes remain the clothes drying on the ropes, curly ivy and, of course, cats. Yes, they also live here with proper kitty families!

Looking into any of the yards, you will certainly find some kind of attraction. It can be a flowerbed with a desolate fountain, a table made from a Zinger sewing machine, a marble chess top, unusual sculptures, or even a miniature Eiffel tower. Also you can encounter a monument, for example, to the artist Kostandi, or the only bust in Ukraine dedicated to the creator of Esperanto – Zamenhof. Equally, you can stumble upon street art with picturesque views of Old Odessa, plots from the biography of local celebrities Mishka Yaponchik and Osip Shor. There are interesting murals and graffiti that deserve attention too.

In almost every yard you can see an abandoned well or a water stand pipe, preserved to this day. Thus, earlier it was necessary to collect fresh water due to its shortage and frequent interruptions. However, in fact a street water tap served as a place where the neighbors were gathering to talk about household chores.

Today, Odessa courtyards are the most popular tourist route. During our excursion, we will take you around those streets where there will be the so-called “draft yards”, double yards or yards with galleries. Each of them is original and unique. A fascinating journey with stories about the history of the city, life and traditions of these people, as well as about famous and little-known citizens, awaits you.
Our guides

The Opera House was built in 1884-1887 (1, Tchaikovsky lane). This main attraction of Odessa is included in the list of the best ones in Europe. From the back of the theater, you can get into the beautiful courtyard, where the city square is located. The square is decorated with a large fountain and a sculptural composition, established back in 1900. Today it is one of the popular tourist destinations. In warm season, a famous Opera buffet is open here. 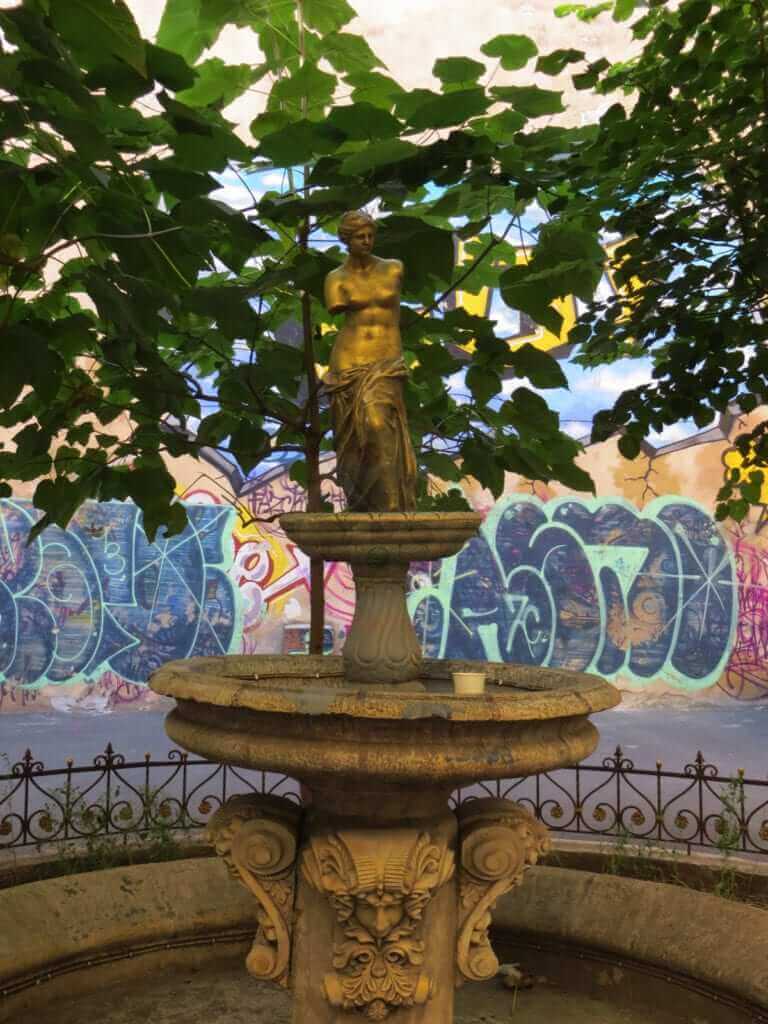 Zavadsky’s House was built in 1828-1830 by architects A. Melnikov and Franz Boffo for the official Zavadsky (1, Katerininskaya Square). Since 1832 the building was owned by the French tailor Verelle, who transformed it into a fashionable hotel of Petesburgskaya. Ivan Bunin, Sarah Bernhardt, Mark Twain, Sergey Rachmaninov and others stayed here. Through the arch we get into the courtyard, in the center of which there is a beautiful fountain with a fence, decorated with a figure of Venus holding bowl that features a marble capital at the base. Here you will also see the main attribute of any old Odessa courtyard – a water standpipe. A bright, cozy courtyard with its history has long been one of the most visited. 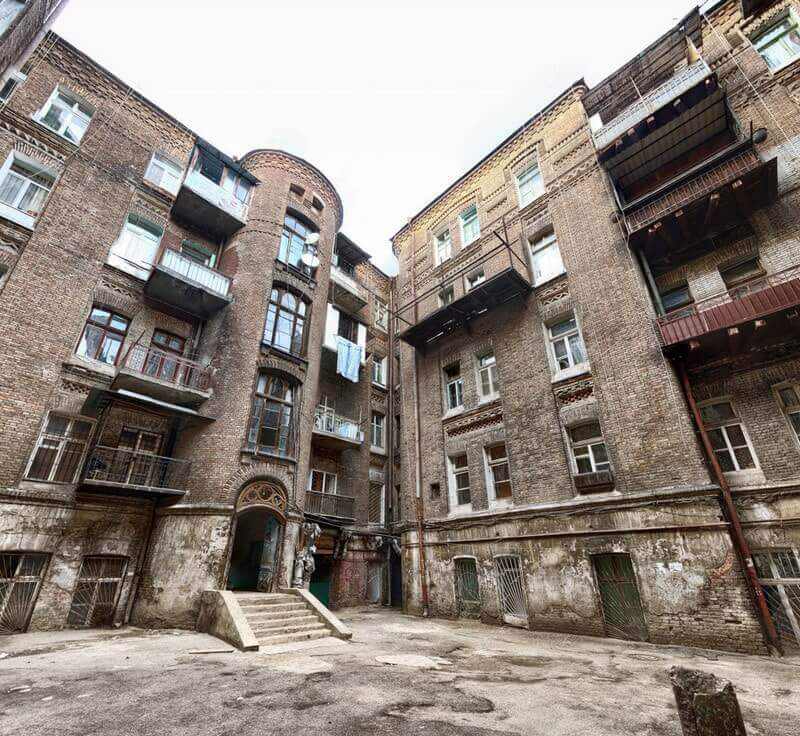 Seagal’s House, built in the 1880s, is a monument of architecture (8 Spiridonovskaya St.). The building was built of red brick and served as a tenement house. Its owner was the industrialist Usher Segal. However, he did not own it for long. After Segal left Odessa, there was a hospital in the house, then book trade was conducted, and later a cement sales office was located. It is noteworthy that in the courtyard well there was a large flowerbed with a fountain. One of the episodes of the movie “Liquidation” was shot in this courtyard. 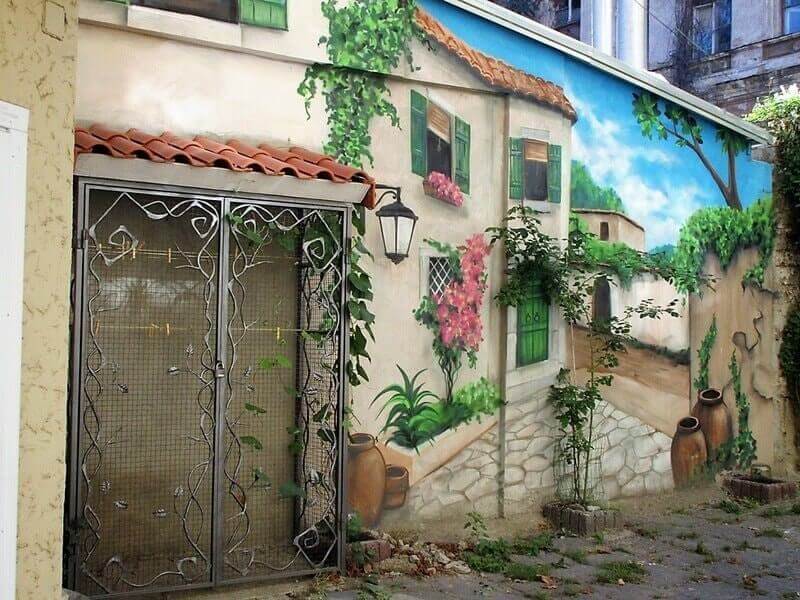 Shemyakin’s House was built in 1848. (9, Gogol St.). The mansion belonged to an entrepreneur Shemyakin and served as a tenement house. In 1915-1941, a famous academician V. Filatov lived in one of its apartments, as evidenced by a commemorative plaque on the facade of the building. Today, there is a hostel that can be reached via a wonderful patio. Inside, an old well has been preserved. On one of the walls features a mural depicting the Odessa court. 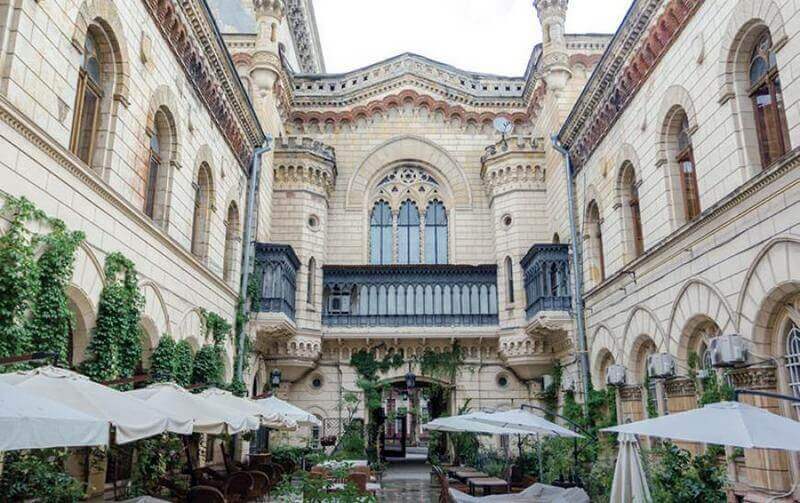 The former merchant exchange is a neo-renaissance building constructed in 1899 for exchange trades, known as the New Merchant Exchange (15 Bunin St.). It served as a marketplace for a short period of time. With the advent of Soviet power, various organizations began to be placed here, and since 1946 until now the Odessa Regional Philharmonic Society has occupied the premises. Interestingly, the stock exchange building is considered similar to the Doge’s Palace (Venice, Italy). The unique architectural structure still has its original appearance and draws the gaze with its decoration – huge windows with colored stained glass windows, a grand marble staircase and walls of halls decorated with paintings. Even if you are not a fan of symphonic music, you should definitely get inside to see the beauty of the interior. 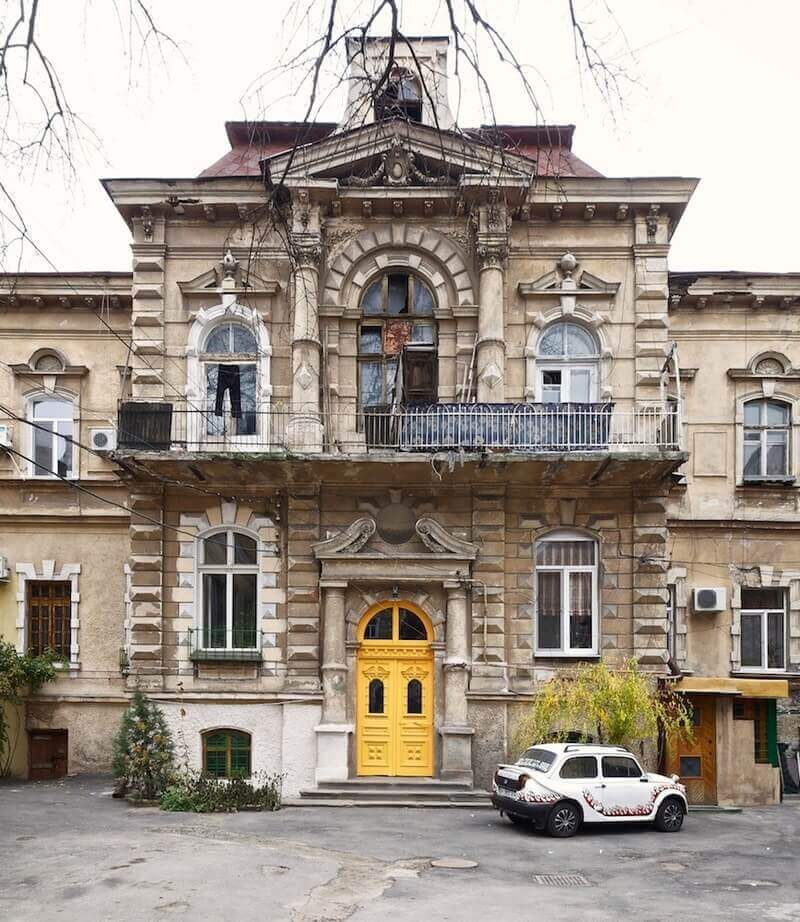 Paraskeva’s Manor House is an architectural monument of the middle of the 19th century, the oldest one among architectural ensembles of this type (32, Zhukovsky Street). The owners of the estate, the Paraskeva’s family, were merchants of Greek origin. A building features an elegant two-story mansion with two service wings on the sides, thereby forming a courtyard, separated from the street by a fence. The main building is located inside the courtyard, closing the plot at the back. At the beginning of the XX century, the premises were leased. So, there was a Persian consulate, retail stores, laundry and other companies. Today, the main building of the ensemble remains residential, with various institutions located in the side wings. The complex has retained its authenticity in both decoration and luxury. 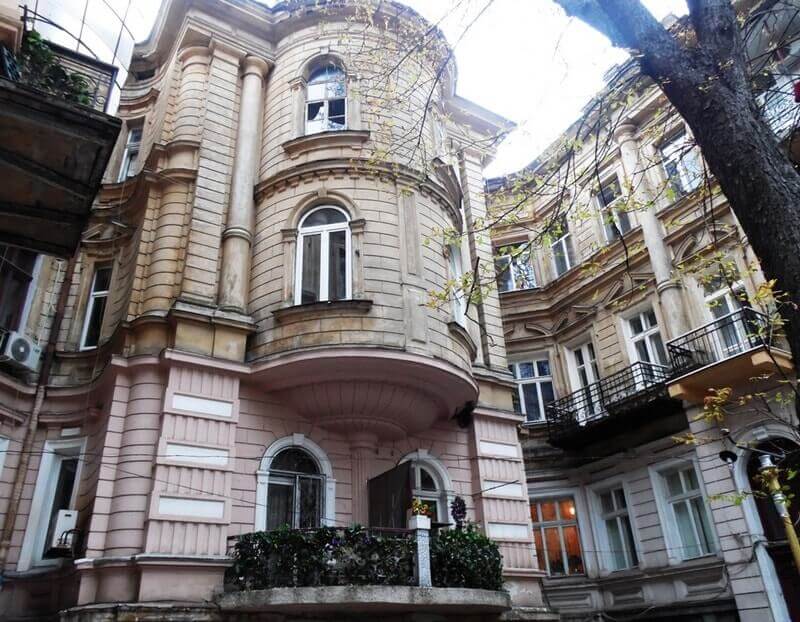 Female Gymnasium is the building erected in 1836 according to the project of Toricelli (St. Koblevskaya, 40). It was rebuilt in 1886 by an architect Gonsiorovsky (date indicated on the facade). At the beginning of the XX century, the premises were occupied by the Dolgorukov female gymnasium. Later, doctors A. Dmitriev and G. Kerm worked here, and a member of the city council M. Krapivin also used to live in this building. During the Second World War, the commandant’s office of the Romanian army was located here, in the postwar years – the housing department of the Voroshilov District Council. At the same time there was an elementary school. Then, at different times, there were a district court and an office of lawyers. Today it houses various organizations. The building features a very elegant house with an amazing courtyard. Especially interesting are openwork semicircular ledges with bay windows. 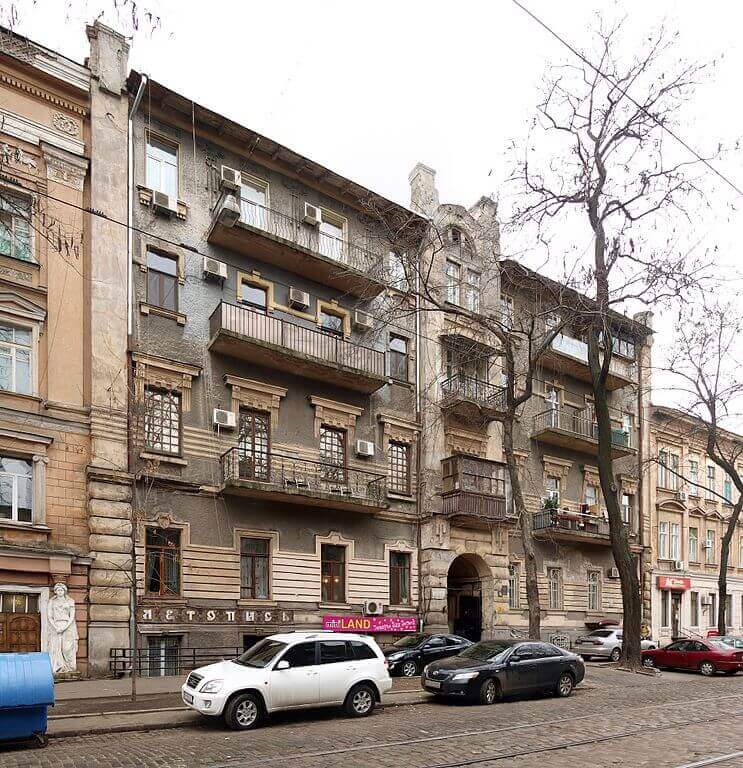 Veselovsky’s Profitable House is an architectural monument (56, Nezhinskaya street). In 1907-1909 the owner of the plot was Konstantin Veselovsky. At one point of time, the rooms were rented and a famous opera singer Maria Meltzer lived here. At the beginning of the twentieth century, a four-story front building with a residential basement and a side wing were built. The main facade has a small number of sculptural details. An expressive element is the central risalit crowned with a pediment. The main staircase is partially located in a large semicircular risalit, while the entrance doors and staircase railing are decorated in modern style. Passing through the arch, you will find yourself in a small deep courtyard. 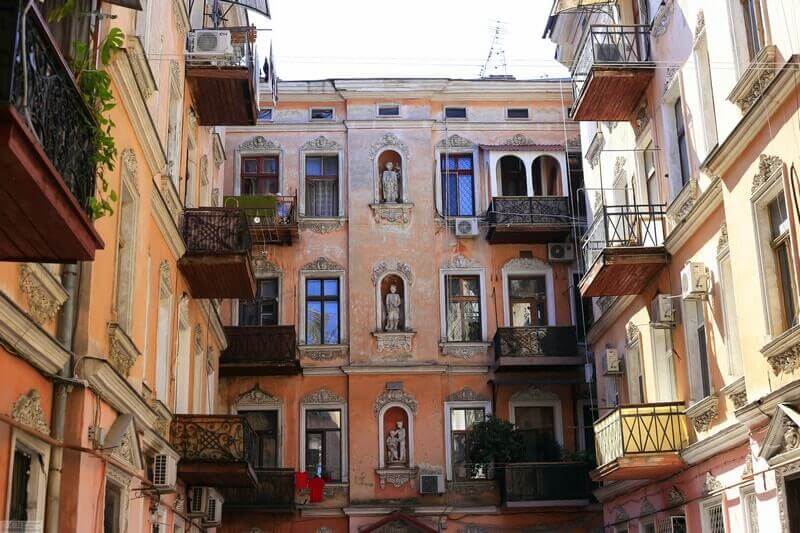 Michelson-Shcherbakov’s House is an architectural monument of the early XX century (30, Nezhynska street). It served as a tenement house and belonged to the owner of the concrete plant A. Shcherbakov. On the facade of the building you can see the inscription “A. S. Shcherbakov”. In 1907 the plot on Nezhynska was sold to the 2nd guild merchant Haim Mikhelson, as indicated by the tablet to the left of the gate. Entering the courtyard, we can see a typical merchant’s yard. The facade of the rear wing is decorated with stucco and sculptural figures located in niches at the level of each floor. 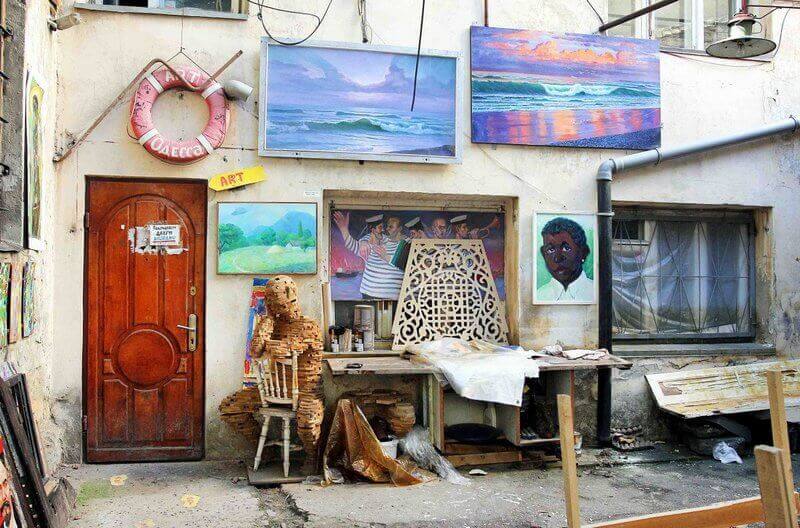 The art courtyard of Nekrasov is an unusual courtyard, inside which you can see the works of Odessa masters of modern art (8-10 Nekrasov lane). The initiative to create an open-air gallery belongs to Odessa artist K. Bondarenko. This place has become one of the most favorite tourist destinations. Anyone can come here. Moreover, the artist invites you to visit his workshop, where his paintings and works of other artists are presented. 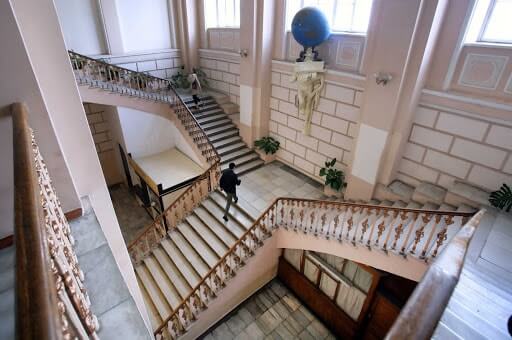 The Richelieu Lyceum is an educational institution of the highest category, founded in 1817 and named after the Governor General de Richelieu. Here, future officials of various professions were trained. Training was conducted in French and Russian. In 1864 Lyceum was transformed into Novorossiysk University. In 1989 on the basis of a secondary school in the building of a former commercial school, the Richelieu Lyceum was opened (5 Elisavetinskaya St.). The secret of one Odessa courtyard lies in the territory of the educational institution. 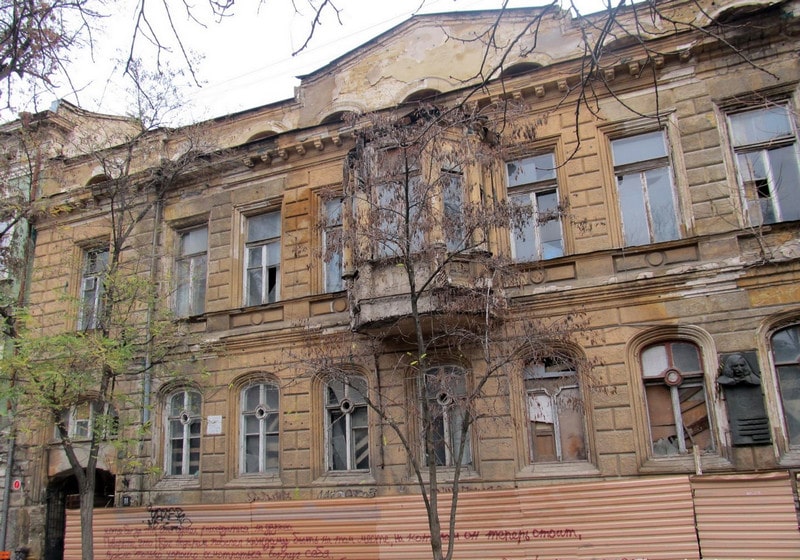 The Gogol House, erected in 1836-1849, is a historical monument (11 Gogol St.). The house is famous for the fact that in 1850-1851 a promenent writer Nikolai Gogol lived here. The plaque on the facade of the building reminds of. It is believed that the second part of the novel “Dead Souls” was written here. The mansion itself was built for a retired Major General Troshchinsky – a relative of Gogol. The Troshchinskys were trustees of the Gogol family. The building is now ruined.