We invite you to join our individual tours around Odessa, which take place in picturesque areas along the Black Sea coast – Lanzheron, Arcadia, Big Fountain. We will go along the route of the Health Track, where you will see the NEMO dolphinarium, the beaches of Otrada and Dolphin, the old cable car, a fabulous tunnel lined with mosaics, and much more. It’s gonna be a walking tour. If you do not like to walk for a long time, we can ride along the alley on an open tram. For cycling fans, we can conduct a bike tour. Duration – 3 hours.

The embankment of Odessa is one of the main attractions of the coastal city. Picturesque landscapes and sea air attract thousands of tourists at any time of the year and in any weather in order to take a promenade along the coast, enjoy the pleasant sea breeze, and be filled with the vitalizing energy of the Black Sea.

In the XIX century most of the Odessa embankment was a high cliff with a rocky edge off the coast. Natural slopes to the sea were on the outskirts, for instance, in areas such as Arcadia or Luzanovka. Due to the fact that Arcadia was in the palangon, it was possible to go to the beach, bypassing the slopes. Already at the end of the XIX century. they launched a horse tram that ran along the French Boulevard, past the Gagarinsky plateau. With the development of the coastal line baths were built.

Lanzheron is an old, closest to the city center beach, named after the mayor A. Lanzheron, whose cottage was located on the cape. In the 1930s, the area was reconstructed by strengthening the slopes and dismantling the debris from the devastating landslide that happened in 1918. In addition, a new descent to the sea was laid. It was decorated with sculptures, with two white balls were installed. Only the front gate in the form of an arch (1830) remained from the former dacha of the count.

At the turn of the 1950s and 1960s, large-scale works to fortify the coastal zone and to improve the resort started. Odessa beaches acquired a modern look only in the 1960-1970s. 12 km of sandy beaches were washed up, concrete piers and breakwaters were built, as well as locker rooms and wooden trestle beds were installed. The coastline from Lanzheron to the Big Fountain, in fact, has become one solid city beach.

Today, the total length of Odessa beaches is 20 km. Their area is 42.65 ha. Resort areas include: Lanzheron, Otrada, Dolphin, Arcadia, Chaika, Golden Coast and the Big Fountain. Natural beaches are Kryzhanovka, Luzanovka, Peresypsky, Kovalevsky dacha and Chernomorka. A coastal line from the Black Sea to the Kovalevsky Dacha houses “wild” places where you can be alone with nature.

A famous Health Route connects Lanzheron and Arcadia. This picturesque alley with a length of 6 km (!) has long become a favorite place for outdoor activities of Odessa residents. Here you can walk and ride a bike or an electric car. There is also a climbing wall and various sports grounds. Walking along the alley, you will notice the cable car leading from Otrada to French Boulevard. Make sure to take a ride on the “cable car”, as it opens a simply amazing panorama.

Arcadia is the most popular resort in Odessa with attractions, restaurants, cafes, bars and clubs, as well as a water park and a light and music fountain. Every year, from the first days of May to the beginning of October, life here goes on 24/7. Fans of night parties come from all over Ukraine and Europe to visit famous discos of “Ithaca” and “Ibiza”, where the stars of Ukrainian and foreign show business often perform.

Odessa embankment is not only the sea, but also tons of entertainment, good mood and an endless holiday of summer. If you want to recharge with positive emotions, make sure to come to Odessa! Our guide will accompany you making your journey unforgettable! 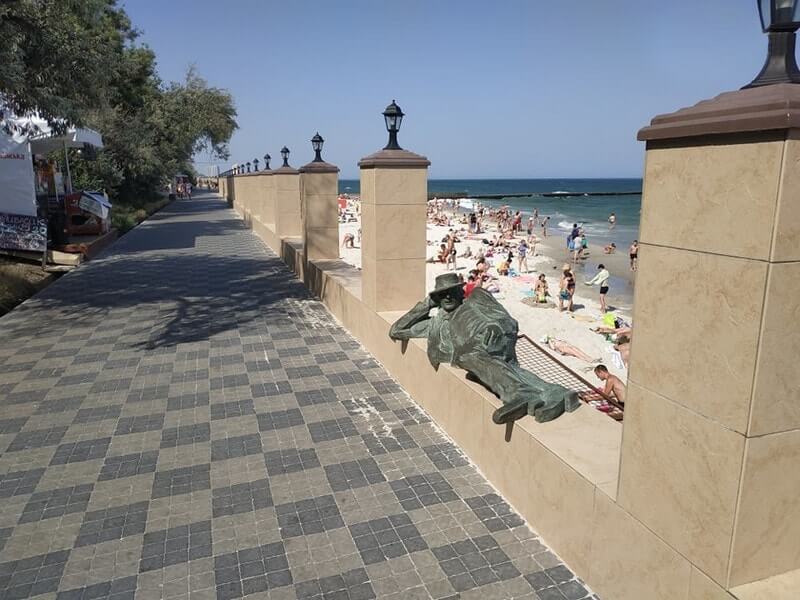 The Big Fountain is a sandy beach resort area in Odessa located behind the Arcadia along the coast. The resort extends between the 10th and 16th stations of the Big Fountain. The area name arose due to a large number of streams here. Clean cozy beaches are very popular among vacationers. Such beaches, as Chaika (10th station), Riviera (12th station) and Kurortny (13th station) are highly preferred. Sanatoriums, recreation centers, cafes and restaurants are open along the coastline. A tram number 18 which runs from the station, will take you from the center to the Big Fontanka. 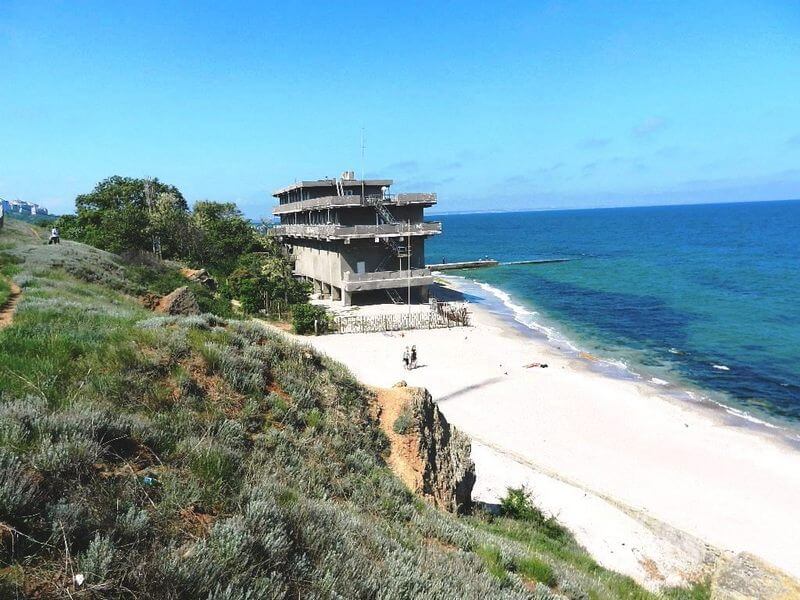 Dogs’ Beach is located between the beaches of Dolphin and Otrada. It’s spacious, sandy, with clear water and a convenient descent down the stairs. It is considered to be a favorite vacation spot of Odessa residents. It has got such name, as people traditionally rest here with their pets. Recently, it is quite popular, but not equipped with sun loungers, as it is unofficial. Don’t get scared, if someone else’s pet is running nearby. 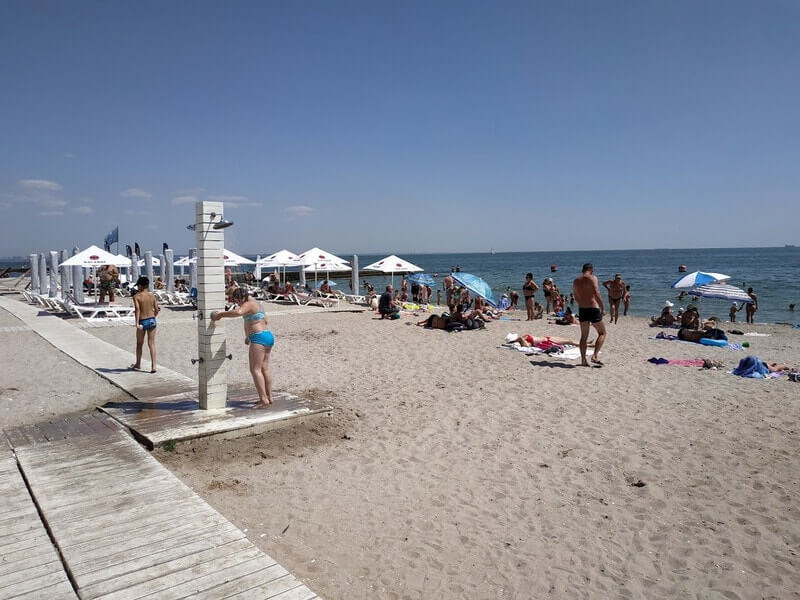 Dolphin – one of the city’s beaches in Odessa, located near the center (Shampansky Lane). Dolphin is popular among locals, young people and families with children. It offers clean sandy beach, free admission, as well as a deck chairs and umbrellas rental. You can get the by the stairs next to the Champansky Lane. However, it is better to come back by getting on the elevator from the “Magnolia” sanatorium. The beach area is connected with the elevators by a 200-m long tunnel, lined with a mosaic of fairy-tale characters. A colorful or, as Odessa’s inhabitants call it, – fairytale tunnel has long become a highlight of the city. 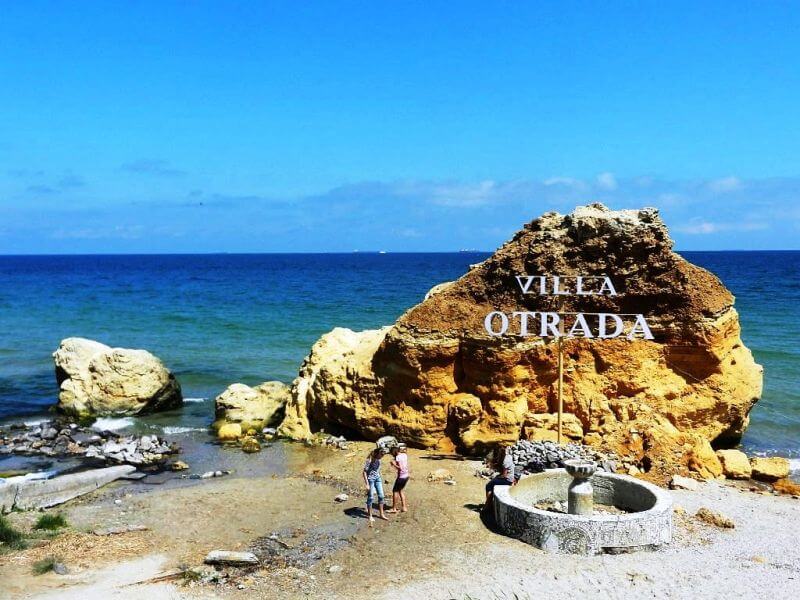 Otrada – one of the most popular beaches in Odessa, located near the city center, immediately after the Langeron beach. The beach is sandy, fairly clean, admission is free. It is mostly popular among youth. Otrada is the only where you can get not only by stairs, but also along the cable car connecting French Boulevard with the beach. Travel time is 5 min. Tennis courts, entertainment venues, cafes and restaurants, as well as a yacht club are located near Otrada. 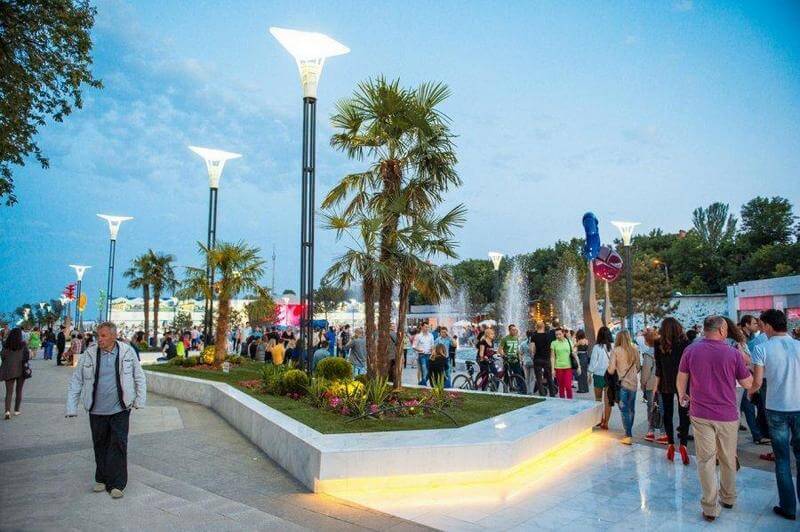 Arcadia – the most popular resort area of Odessa. It appeared in the XIX century and is named after the greek mountain region. Due to its location and gentle slope to the sea, Arcadia has become a favorite leisure place among citizens. Today it is here that the best beaches, summer cafes, restaurants and nightclubs, as well as entertainment for every liking are located. Its territory houses water park, rides, souvenir shops, boutiques and some food places. In the evening, you will see a light and musical fountain, which has long been a decoration of Arcadia. In the warm season, famous “Ibiza” and “Ithaca” disco are open here, where mega bright parties, shows, and concerts of both Ukrainian and foreign stars take place. You can get to Arcadia from Langeron along the Health Track or by tram No. 5, which runs from the city center. 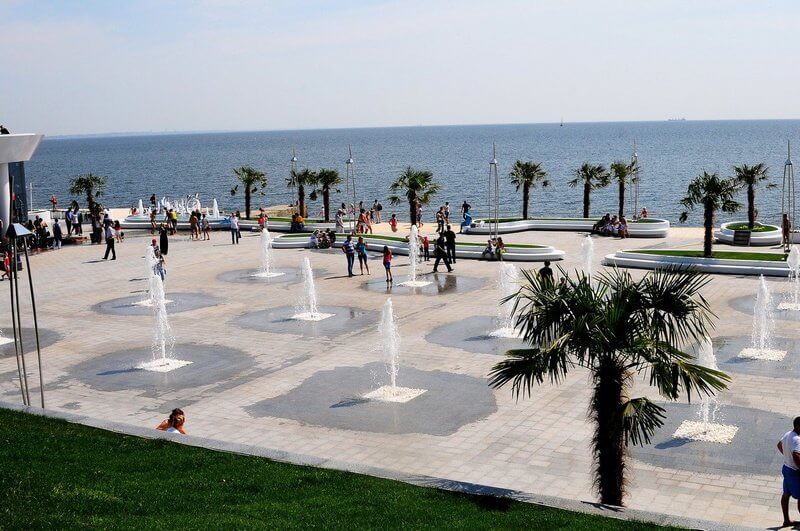 Lanzheron – a famous city beach in the center of Odessa, named after Governor-General Alexander Langeron. Since the end of the XIX century, the beach has become a popular holiday destination among the townspeople. Due to its proximity to the city center, it is the most visited beach among holidaymakers. You can get to Langeron from the center through the Shevchenko park. Before the entrance to the beach there is an arch, built in 1830. Once there was the summer residence of the governor Langeron, and the arch itself served as the main entrance. Today this preserved object is an architectural monument. Langeron Beach, as before, remains the most popular one, with a developed infrastructure, a lot of entertainment, cafes and restaurants. Nearby, there is the best in Ukraine Dolphinarium “NEMO”. 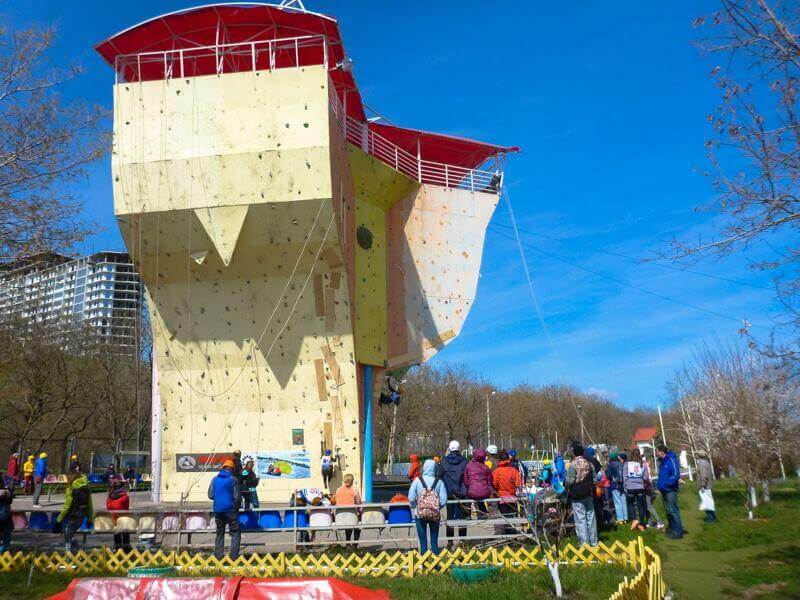 Climbing wall is located between Arkadia and Chkalovsky beaches, not far from the Black Sea coast. It is a climbing stand with an artificial relief (15m) and various tracks. Fans of outdoor activities will be able to take climbing lessons or practice under the guidance of professional instructors. Nearby, there are natural cliffs (8m), where you can test your fitness by receiving a portion of new emotions and light extreme. 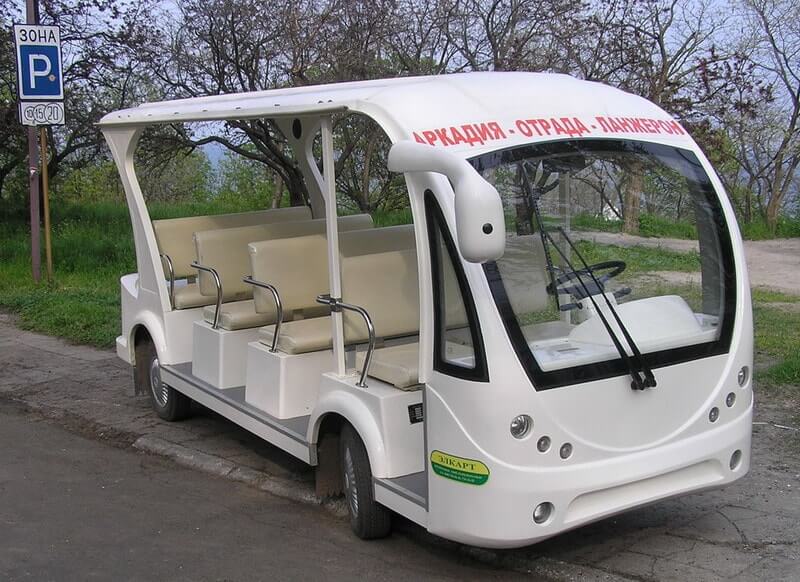 Walking electric car runs in the warm season along the “Health Track” route. Those who do not like to walk for a long time, can take a transport from Langeron to Arcadia and vice versa. Riding along the alley, you can admire picturesque landscapes and sea views, see the old cable car, as well as the beaches of Otrada and Dolphin. 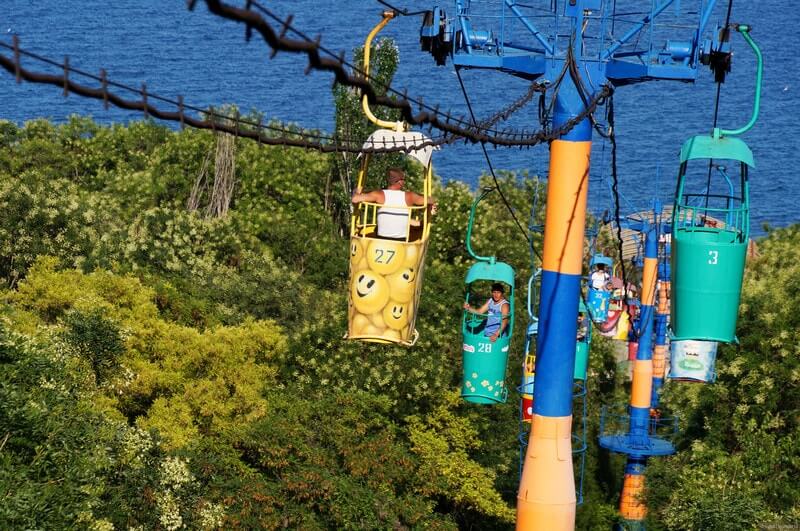 Cable way connects the French Boulevard with the Otrada beach (upper station – French Blvd, 17/19). It was launched in 1971. Its length is 425 m, and the travel time is up to 5 minutes. After fun time on the beach, you don’t really want to climb the stairs. Therefore, do not deny yourself the pleasure to ride a cable car. Moreover, the cable car offers amazing views of the Black Sea shore.

Dolphinarium “NEMO” was opened in 2005 at the NEMO complex (Langeron beach). Dolphinarium hosts daily shows with dolphins and fur seals. After the performance you will have a chance to swim with dolphins and to take memorable photos with them. There is also a dolphin therapy center, an oceanarium with sea fish and exotic animals. “NEMO” is a modern complex, decorated with the area of fountains. The complex also includes a hotel, restaurants and a beach. 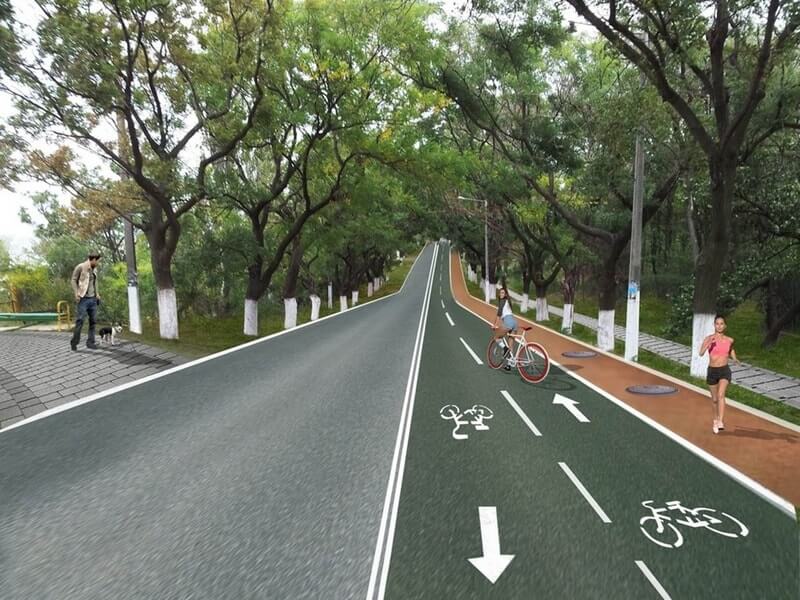 Track of health is a pedestrian zone that has become one of Odessa’s highlights. It extends along the coastline, connecting the beaches of Langeron and Arcadia. All year round here you can see people from Odessa walking, jogging and cycling. A 6-km long track is equipped with sports and playgrounds, as well as with recreation areas. There are also cafes and restaurants. This is a picturesque alley. A walk there will become an amazing romantic journey. In summer, electric trams run along the alley, along with bicycle rental points, rollers and gyro scooters stations. It is planned to extend the Health Track by another 5 km, opening a passage in the Arcadia area to the 16th station of the Big Fountain.