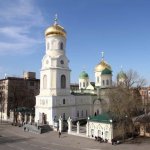 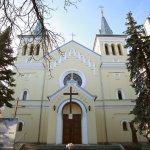 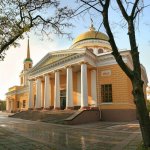 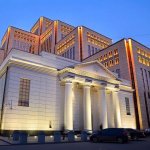 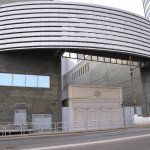 The Holy Trinity Cathedral – is an Orthodox church built in the middle of the 19th century in accordance with the project by Charlemagne-Bodé and Visconti. The cathedral was built on the site of the first city wooden church erected in 1791. Originally it was called the Trinity Church or the Church of the Descent of the Holy Spirit. In the 1860’s, a bell tower based on the project of the local architect was erected in front of the church. Later the houses of the parable and the parish school were built. A famous Ukrainian artist I. Izhakevich was invited to paint the frescoes. In 1934 the church was closed and turned into a warehouse. In the 1990s, restoration work of the exterior and interior decoration of the church was conducted.

The Roman Catholic Church of St. Joseph the Betrothed – is the building of a Roman Catholic church in the Neo-Gothic style, built in 1877 (91 Yavornytsky Ave). The cathedral is decorated with frescoes. Some of them have survived till today, including inscriptions in Polish on the walls. In the postwar years, the building of the church became a library, and later it was re-equipped into gymnasium at the city sports committee. In the 1990’s, there were various societies and organizations. And only in 2009 the building of the church was returned to the Roman Catholic parish of St. Joseph. Since 2011, the cathedral has been under renovation for several years. Today, the doors are open for daily worship services.

The Transfiguration Cathedral – is a cathedral that belongs to the Dnipropetrovsk Diocese of the Ukrainian Orthodox Church. It is an architectural monument. The first laying of the cathedral was in 1787, but the construction did not go further than the foundation. The second stage of the construction took place in 1830, and by 1835 the Transfiguration Cathedral was completed. The Cathedral is built in the classicism style. It has a T-shaped configuration. The cathedral has three entrances – the mainentance, the northern and southern ones. All of them are decorated with six-columned porticos. With the advent of Soviet union, the cathedral was closed, and the premises were used as a warehouse.

The “Golden Rose” Synagogue – is a Choral Synagogue, built in 1852 (reconstructed in 2000). The initiator of the construction and the main sponsor is L. Kranzfeld. Having received permission in 1837 from Governor-General Vorontsov, the construction of a stone structure was started, which was suspended due to lack of funds. According to the preserved fresco on the building, the synagogue was completed in 1852. It was erected on the site of a wooden synagogue built in 1800 and burned down in 1833. In 1929 the synagogue was closed. Since 1996 it was returned to the Jewish community, reconstruction was carried out. In 2000, the synagogue was opened (Sholom-Aleichem St., 4). The main hall is designed for 450 people, the foyer is decorated with the works of Franck Maisler.

Small Synagogue – synagogue on the street. Kotsyubinsky, 7 in the Dnieper, does not represent architectural value – only historical. For all of its existence, the synagogue has served only as a prayer house. In the 1980s. A small synagogue was visited by a few elderly Jews, only a large number of people gathered for large holidays. Since 1998 the building has been transferred to the community and until 2000 it was the only synagogue in the city. From the entire block of the old building, on the site of which the modern shopping and entertainment center “Most City” was built, one synagogue building was preserved.