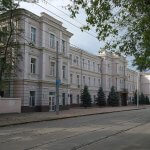 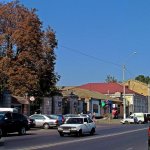 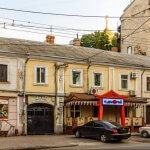 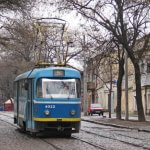 Staroportofrankivska – one of the streets, located in the central part of Odessa on Moldavanka. It used to serve as a kind of border between the city and the surrounding area. Having received at the beginning of the XIX century the “Porto-Franco” right of free trade, the city government established a border line to collect duties for the export of goods from the city. The line used to surround the entire city and represented a huge, up to 2-m deep ditch. There were crossing points along this line. Later, the nearby villages entered the free trade zone: Moldavanka, Peresyp, Malyi Fountain, etc. The frontier lasted until 1858, and all the moats were filled up. One of the moats formed the Staroportofrankivska street. Today, the street bends around the center of Odessa in a wide arc, dividing the historical part of the city from the former settlements that were once attached to it.

Myasoidivska – one of the central and most famous streets of Moldavanka. It originated in 1841 and takes its name from the tradesman and the owner of the brewery Dementiy Myasoedov, whose estate was located at this place. In 1829 a hospital was opened by the Jewish community, which later became the main local object. In 1866, the section of the street was renamed into the Jewish-Hospital street, and later – to Gospitalniy lane. In 1928 the street was named after the Jewish writer Sholom Aleichem, who lived on Myasoidivska street. In the 1990s the street adopted its historical name. The legendary street was mentioned more than once in stories, with the “Myasoedovskaya, My Street” song being known not only in Odessa.

Mala Arnautska – a street located in the central part of Odessa on Moldavanka. It appeared at the beginning of the XIX century and got its name from Arnautskaya settlement – a soldier’s settlement, which consisted mainly of arnauts. Arnauts were Orthodox Albanians who fled Islamism and settled here. Throughout history the street was repeatedly renamed and only in the 1990s it obtained its historical name back. The founder of the Jewish Legion Jabotinsky, the writer Ravnitsky, the poet Bialik, and the prototype of Ostap Bender – Oseep Shor used to live here. It was believed that in Malaya Arnautskaya they fabricate fakes, mint fake coins and buy stolen goods. The notorious adventurer Ostap Bender said in the novel “The Twelve Chairs” by Ilf and Petrov: “All the contraband is made in Odessa on Malaya Arnautskaya Street”. Guest houses of the XIX century, the building of a Jewish educational institution and the former “Chante clair” cinema have survived to this day. 111 Mala Arnautska street housees the Holocaust Memorial Museum to the victims of fascism.

Kolontaivska is a street located in Moldavanka. It bears the name in honor of one of the prominent managers of Odessa in the XIX century – Yegor Kolontaiv, an ally of Prince Vorontsov. Yegor Kolontaiv was known as an outstanding man, who served as a collegiate adviser and was also the overseer of the port of Odessa. A courtyard, where the filming of the popular movie “Liquidation” took place, is located on the Kolontaivska street, 21. Today this place has become one of the landmarks of the Moldavanka.