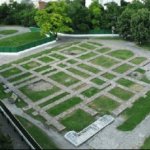 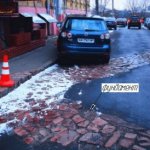 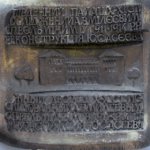 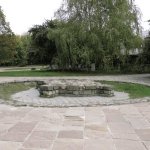 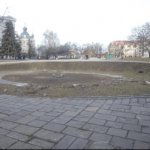 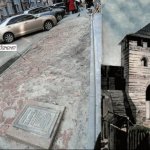 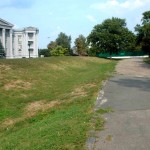 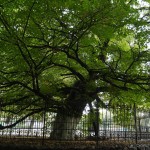 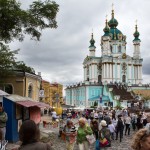 – The Tithe Church – is the first stone church of Kievan Rus. It was built on the site where, due to the Prince Volodymyr’s order, two Christians – infant John and his father Feodor were sacrificed to Perun, the pagan god. The church was built in 989–996 in the period of Volodymyr Sviatoslavovych reign, who allocated a tenth of the princely income for its construction, i.e. a tenth. Hence the name of the temple was arisen. The temple was established in honor of the Dormition of the Mother of God and was a cross-domed six-pillar temple. The Tithe Church was decorated with mosaics, frescoes, carved marble and slate slabs. Volodymyr Sviatoslavovych and his wife, the Byzantine princess Anna, were buried here, and Princess Olga’s ashes were brought here from Vyshhorod. At the end of 1240 hordes of Khan Batu, having seized Kiev, destroyed the Tithe Church that was the last cache of Kievans. During the brutal massacre, arranged by the Tatar-Mongols, many Kievans tried to hide in the temple. Under the pressure of people, the church could not stand it and collapsed, the townsfolk were buried under it. In the 30-ies. of XVII century at the initiative of Peter Mohyla the Metropolitan, the first excavation began and the sarcophagus of Prince Volodymyr and his wife Anna were found. In 1635 at the initiative of P. Mohyla on the site of the Tithe Church, a church was built in honor of St. Nicholas, which stayed until 1824. Archaeological discoveries are kept in the reserve of the Sofia Museum, in the National Museum of the History of Ukraine. The complex of archaeological excavations is, like the whole complex of Sophia of Kiev, is under the protection of UNESCO.

– The Western (Grand) Palace – is a palace that occupied a small square and was represented in front of the Tithe Church, contemporaries were amazed with its luxury and splendor. The western side of the palace was supposedly the main residence of Prince Volodymyr. The longitudinal axis of the Tithe Church is exactly perpendicular to the axis of the palace. Probably, in front of the Tithe Church four horse sculptures, brought by Volodymyr from Chersonese were installed. The same situation is in Constantinople, where the four famous horses of Lysippos the sculptor, taken out of Olympia and installed in front of the St. Sophia’s Cathedral. Analyzing the nature of the divisions, we can assume that the total length of the building reached 70–72 m. The central, almost square in the plan room (9*8 m in internal dimensions) was obviously the lobby of the palace, where staircases could be placed on the 2nd floor. The premise was covered more likely by a tent top. On both sides to the central room the elongated wings in the plan were adjoined. Perhaps the facades of the lower floor had open arcades in front of the main halls, on the upper – there were living quarters. The brick parts of the walls were not preserved, but due to the fragments of the brick it is evident that it was similar to the brick of the Tithes Church.

– The Southern palace – is a palace, located from the south-west at an angle to the Tithes Church, which separated the square from the main street of the city, and was probably a princely griddle, i.e. the ceremonial hall where the squad was assembled. The palace had a three-part layout: an extended room in the plan and two square ones on the sides. The bases were laid relatively shallow (60 cm) with a very large thickness (170 cm). The base, masonry and brick of this building are the same as in the Western Palace. There was supposedly a large hall in the central room, and there were the towers with stairs to the 2nd floor in the side rooms.

– Pagan Temple – is the temple located near the Historical Museum, not far from the Andrew’s descent. It is one of the most famous temples, the base of which is recreated on the Starokyivska mountain. Hundreds of years ago there was an altar here, i.e. a place of worship and sacrifice to the pagan gods. Probably, it was the temple of Perun that was the cult center of the Poliana principality, later – Kievan Rus. During excavation, a huge amount of ash, bones, mainly of animal origin, was discovered here. The temple is a stone circle with four ledges pointing to the sides of the world. The first to study the temple was Vikentii Khvoika, an archaeologist, who unearthed it in 1908. He believed that these remains belonged to a pagan temple, and the pillar served as an altar on which sacrifices were performed for a long time. The temple dates back to the 6th-7th centuries.

– Rotunda – a medieval rotunda in the Romanesque style, existing on the territory of Detynets in the period of Kyivan Rus (XII-XV centuries). It represented a round structure of a tower type, decorated with pilasters, built of boulders and small stones. Walls up to 10 m high (preserved only 80 cm) were decorated with frescoes. Remains of fresco plaster evidence of the rich interior decoration of the building. Presumably the rotunda was destroyed during the Golden Horde attack on Kyiv. Full archaeological excavations of the foundation were carried out in 1975-1976 by archaeologists P. Tolochko and J. Borowski. The remains of the rotunda foundations are conserved and located along Volodymyrska Str., 3. Research materials are kept in the Museum of the History of the City of Kyiv.

– St. Sophia’s Gates – Khan Batu’s Gates, built in the late 10th century during the creation of the defensive system of the Upper City, i.e. the city of Volodymyr. The bases of the St. Sophia’s Gates were two parallel walls of 6 meters long. A high arched passage of 4 meters wide and, probably, a drawbridge were located under the quadrangular gate tower. The design of the St. Sophia’s Gates was originally made of wood and consisted of stands, erected in two tiers with gate towers- strelnitsas, which were crowned by pyramidal roofs with convenient platforms for shooting from bows and crossbows. The bases of the gates are marked with red quartzite at the corner of Velyka Zhytomyrska and Volodymyrska Streets.

– Earth ramparts of Detynets – earth embankments (3-5 m) and ditches up to 3-5 m deep. At that time for the construction of the fencing fortifications were not used wooden log houses – gorodni (wooden and earthen construction), which are filled into the ground. Above the earth ramparts were piled a pillar-logs with pointed ends, tightly connected and protruding upwards by 3-4 m. Logs of different heights formed peculiar embrasures. Such ramparts with a column encircled the Ancient City of Princess Olha with an area of 2 hectares. Some of these ramparts have survived to present day and due to their contours we can imagine the size of the original Detynets.

– Petro Mohyla linden – linden, planted by Petro Mohyla itself, is located near the historical museum next to the ruins of the Tithe Church. The height of the linden reaches 15 m, in the girth – up to 3 m. Its age is approximately 400 years. According to the established plate was planted in 1635 and timed to the construction of the Church of the Tithes. During its existence there were many legends, one of which says that a tree is capable of fulfilling wishes. This is the most famous ancient tree in Kyiv.

– Babyn torzhok – the area before the Tithe Church, which existed in Kyiv during the Kyivan Rus. It was the urban area of Upper Kyiv (X-XIII century), which stretched along the present Volodymyrska Str. in the direction of the Velyka Zhytomyrska Str. and was not only a trading, but also a parade area. Presumably the name comes from the copper statues (old women – baby) brought to the capital by Prince Volodymyr from Korsun (Khersones) and installed in front of the Tithe Church. In the 1830s the terrain was changed, and the territory of the square was partially built up and cut through by the Volodymyrska Str.. Also on the site of the former Babyn torzhok is the Historical Museum.