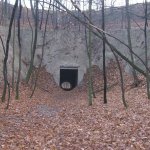 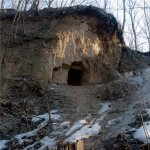 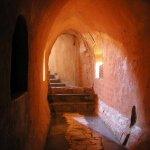 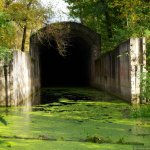 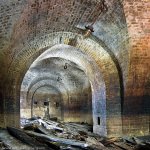 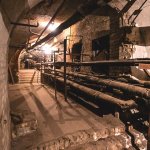 The dungeons of the Arsenal plant 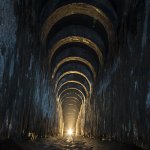 Underground passages (the Bald Mountain) – are the dungeons of the most mystical mountain in Kyiv. Pagan rituals were held here already in the period of Kievan Rus and the ancient wizzards built the first underground passages. Later the territory started belonging to the Pechersky Monastery. The construction of the Lysogorskyi Fort of the New Caves Fortress started here since 1872. In the 1930s, the mountain housed the underground military plant and during the German occupation it was the base of the “Tiger” tanks. The length of the dungeons of the Bald Mountain reaches 1.5 – 2 km.

These are the remaining cells of the ancient Slavic priests, and the abandoned passages of the military bases. For centuries, the Bald Mountain has been gathering many legends and all kinds of stories. For example, they say that’s the place where a portal into the other world opens up. Scientists also say that the area of the Bald Mountain is one of the most powerful geo-pathogenic zones in Kyiv, which leads to various abnormal phenomena. Today the place of power still attracts neo-pagan groups of ridnoviry, mentalists, scientists and tourists.

Underground passages (the Green Theater) – are located in the area of “Arsenalna” metro station. The Green Theater was built on the ruins of a fortification structure of the XIX century. The underground passage was passing the supporting walls and leading to the former Arsenal plant, thus connecting its workshops and the water pump. Many mentalists and bioenergetics assure that under the Green Theater there are underground catacombs with a depth of 9 underground “floors” that were laid back in 1161. According to them, these passages along with the Kyiv-Pechersk Lavra have always been and remain the center of underground communications since the foundation of Kyiv and upto our times.

The reason for the arising legends was a system of drainage shaft systems with multiple entrances. It is rumored that at the lowest underground levels there is the lost library of Yaroslav the Wise. The rumors among diggers say that they have even allegedly found some scrolls. Dungeons of the Green Theater store incredible stories about ghosts and missing people, as well as about the parallel world. Till now, this place has preserved its mystical image and is drawing attention of not only historians, mentalists and diggers, but also of some curious tourists.

Smorodinsky Caves – are situated on Tatarka on the same slope. According to the legend, dragon Gorynych dug the caves to hide from Kozhemyaka. In ancient times there was the River Smorodina on Smorodinsky slope. There was a bridge across the river, which was called Kalinov. It is mentioned in fairy tales that Ivan Tsarevich fought with Gorynych there. The dragon crawled out of the cave on the cliff. Now there are dozens of caves. The hermits lived there long time before, and the refugees hid there during the war.

In 1876 Professor Antonovich identified 15 caves in the ravines near Cyril monastery, as well as a group of caves near Smorodinsky slope. It turned out that the age of the slope is more than 4000 years. The excavations revealed crypt-like galleries about 2 meters height and 1.2 meters wide, which go deep into the ground in different directions. The average length of the caves was 15 meters. One of the ways was about 100 steps long. There were trade tools, crocks from the era of copper and bronze, bones of mammals.

Zverinets Caves (Archangel Mykhail Monastery) – was presumably founded in the XI–XIIth centuries on the territory of the Zverinets, that were the hunting grounds of Vsevolod the Kiev prince. It was destroyed in 1096–1097 by the Polovtsi. The caves of the monastery were found at the end of XIXth century. The monastery was partially rebuilt in 1913. A cave church and a small cell were found not far from the entrance to the caves, an underground corridor with 40 tombs is represented to the left of it.

Ancient Russian drawings and inscriptions, including the famous Zverinets Cross have been preserved on the walls. The Archangel Mykhail Monastery was established on the basis of the Zverinets Skete in 2009. Two churches were built: the Zverinets Venerable Fathers Cathedral, the Mother of God Icon Cathedral. The caves of the monastery are a monument of archeology of national importance. According to one version, the library of Yaroslav the Wise could be kept in the caves of the skete. Zverinets Caves are visited not only by pilgrims, but also by tourists.

The Stalin’s tunnels – is a project of the USSR times to connect Kyiv banks by underground passages. It represents two unfinished railway tunnels under the Dnieper river, which were to become the basis for a complex underground railway crossings under the Dnieper river bed. The construction was required for military purposes and took place between 1938 – 1941, classified as X-files. According to the project, the depth of the tunnels was supposed to be 28 – 32 m, with the planned length of the South Tunnel being 6.5 km (more than 8-m diameter). The project involved up to 20,000 workers.

Two railway bridges connecting the banks could be destroyed in case of war and, thus, interrupt the supply of ammunition. So the North (Obolon-Vigurivshchyna) and the Southern (Zhukiv Island – Osokorky) tunnel passages were built. With the outbreak of the World War II, its construction stopped. In 1946 the construction was resumed until the beginning of the 1950s, when it was decided to completely stop the works due to unprofitability.

The underground NKVD prison is part of the Vasylkiv fortifications of the Kyiv fortress, namely its flanks and posterns. In the 2000’s, during the construction in Pechersk district, an entrance to the dungeon with casemates, a postern leading to them, a caponier and two towers was found. Historians immediately assumed that underground passages were used in Soviet times as prison facilities where tortures could be conducted.

Later the version was disproved, although the place preserved the name of Kyiv underground prison. The 4-km long underground prison of the NKVD had an extensive network of underground tunnels, large diameter brick tunnels for the passage of troops and for the two-way traffic of land transport. Nowadays, the dungeon is sealed with earth, and the passage is closed with a metal grill. Historians have not fully studied the place.

The dungeons of the Arsenal plant – are located on the territory of the Kyiv fortress in Pechersk district. The construction of the plant falls on 1764. Originally, a cannon plant was founded here for manufacturing of artillery guns. The Arsenal premises served as workshops and warehouses. The “Arsenal” as a defensive structure was part of the fortification which could fit the garrison of 2 thousand people and up to 2 thousand pounds of gunpowder. Over time, the fortress lost its importance but the plant continued its operation, remaining a strategic object of the country.

Throughout its history, except for fulfilling military orders, the “Arsenal” was also producing optical devices and cameras. Today the plant does not function anymore, and the historical building is now the museum complex of “Mytsetsky Arsenal.” However, the abandoned basements of the factory, which used to have workshops and warehouses, attract local diggers very much. It’s difficult to get into the cellars but you can sneak there through the territory of the plant or through the drainage collector of the underground Klov river.

To see these huge arched cellars, you need to take a guide. As the basement shops are connected with the underground river, there were rumors of marauders, who used to sail along the river to the dungeons of Arsenal in order to steal devices from warehouses. Previously, the cellars of the plant were connected to the Green Theater, and the passage itself was called the “Rattler’s passage.” Now this route is inaccessible, since it is completely blocked.

Nikolska drainage system – is one of the most picturesque drainage systems and a favorite place for diggers. An old drainage tunnel with up to 3 km of underground passages (1.5 m to 3-4 m-deep) is located near the Kyiv-Pecherska Lavra and was built in 1916 for draining of groundwater. They say that the slopes of the Lavra house about 80 km of the total length of the drainage systems.

You can get into the caves of the Nikolska system only with a guide. Here you will see the extraordinary underground halls nicknamed by Kyiv diggers as the “The Royal Well”, the “True Digger”, the “Dog’s Passage” and the “Cascade Gallery”. Get ready to see stalactites and stalagmites, and even local living creatures – bats. In some places you will have to crawl ;)