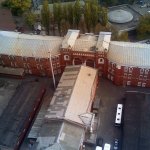 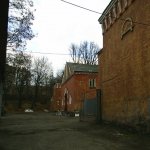 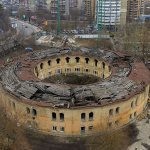 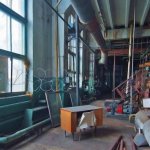 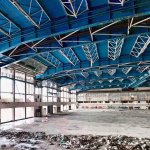 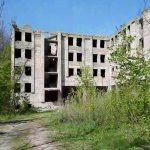 Nicholas (Nikolsky) Gate – a monument of fortification architecture, erected in 1846-1850 and were the main entrance to the Kyiv fortress (Ivan Mazepa Str., 1). Nikolsky Gate with barracks are also known as “barracks on the isthmus”, because were built on the site of a natural isthmus. The construction in the form of a stretched letter “M”, with loopholes and towers with crenellations, amazes with its unusual configuration and romantic forms. The gate as a whole with the defensive barracks stood in a chain of fortifications, located around the Pechersk Upland on the isthmus, connecting Pechersk with the palace part.

A brick wall with loopholes was connected to the workshops of the “Arsenal” plant (a fragment of the wall was preserved). The building of the barracks with Nikolsky gate was divided into vaulted compartments-casemates with embrasures facing the external facade. In 1852 the front facade of the gate was decorated with lion masks and ornaments (preserved from the moat side). After the abolition of the fortress, the gates were dismantled.

It is known that in the early XX century soldiers of the pontoon battalions were stationed in the Nikolsky barracks. Later, on the site of the buried part of the moat and pulled down the defensive wall, starting from the gate, through the fortifications was paved the street. In the 1930s the thoroughfare of the Nikolsky Gate was laid. Today, the remains of the building partially covers the building of the metro station “Arsenalna”, and from the Mariinsky Park it is closed by dwelling houses.

The Green Theater – was built on the ruins of a fortress in the middle of the XIXth century. During the fortification of the Pechersk fortress, two support walls were built for the ravine. It was located between the metro station “Arsenalnaya” and the Mariinsky Park. The upper retaining wall was not of military importance, while the lower one closed the approaches to the Nikolayev chain bridge, guarding the Podolskie Nikolsky Gates. From the water tower, as well as through the lower and upper supporting walls, an underground passage leading to the Arsenal factory passed.

It connected workshops and a water pump. There are galleries and gun loopholes inside the retaining walls. A cinema was built for 4000 seats at the base of the upper wall in 1949. Today the theater is in an abandoned state. Sometimes there are night discos and performances of various youth musical groups. Due to the legends of ghosts and mystical cases, young people of informal and alternative movements loved this place most of all.

Prison Castle – a construction in the structure of the Vasylkiv fortification, built in 1812-1817. (Konovalets Str., 44-g) and designed for holding prisoners (up to 900 people). It was a complex of buildings surrounded by a wall-carpet (the height of the wall is 7 m, the length of the side is up to 100 m), with a courtyard, angular prismatic towers, and also buildings for kitchen, baths and other household needs. In the centre of the courtyard is a two-storeyed rectangular building – barracks for keeping prisoners. Since 1871 it was used to house a military correctional company, in 1880-188. – for the household needs of the military department. Today is in a dilapidated state.

Tower № 4 – the tower of the Vasylkiv fortification, built in 1833-1839 (Staronavodnytska Str., 2). In comparison with other towers it had small dimensions and was therefore called the “small tower”. It is a brick circular structure with an internal cobbled yard. It was built like a barracks for two soldiers’ companies. From the tower to the barracks of the military cantonists there was a defensive wall with Navodnitsky gates (not preserved). At the moment the building is abandoned and no reconstruction has been carried out.

The abandoned chemical plant – is located near the Vydubychi metro station. In 1971, the CHPP-5 was established here. The chemical plant was built around the same period but the exact date of construction is unknown. In the 1990s, the plant was closed and the equipment was removed. Today, there are only reagents, flasks, documents and technical books scattered all over the place.

Also in the plant laboratory you can encounter phosphoric anhydride, hydroquinone and other substances used in the chemical industry. The building of the chemical plant is now abandoned. That’s why Kiev stalkers often visit this place in search of thrill. If you seek for some adventures, you can try to get to the territory having previously agreed with the guards. Keep in mind, the building is very old, so you need to be extremely careful.

The abandoned psychiatric clinic – is another unfinished building, located in the park area of the Kyrylivskyi Gai tract (Dorogozhychi). The building was intended for mentally sick patients who committed serious crimes. The construction was abandoned in the 1990s, and the terrain itself acquired dubious fame. Rumors say that the construction stopped because of accidents. The place is ambiguous, although picturesque. Contemporary artists have chosen an abandoned building for their drawings and graffiti.

This abandoned building is often visited by paintball and airsoft players. Be very careful if you decide to climb the roof of this building. Its top part opens a wonderful view of the park. Near the building, you can see the remains of the monuments of the old Jewish necropolis, as well as the “Babyi Yar” memorial complex. Nearby you can see the most famous mental hospital in the country, named after Pavlov.