Zoo out of Kiev 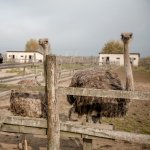 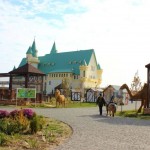 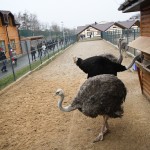 – Valley of ostriches – the largest ostrich farm in Ukraine, where all varieties of ostriches live. It is located in the village of Yasnohorodka (Kyiv region, Makarivsky district). It’s a huge complex (the main field of the farm is 20 hectares). There are two zoos, one of which is a contact, on the territory. Here you will see peacocks, turkeys, fighting roosters, as well as deer, mouflons, buffalos, fallow deer, bison, Scottish cows and other domestic animals. In addition, there is a snail farm. There is a wine cellar for storing author’s farm wine. You can visit a wine tasting with the participation of a winemaker. There are attractions and various entertainments for children. There are picnic areas, a restaurant, a cafe, a souvenir eco-shop. The excursions are held daily in the Valley of Ostriches.

– “12 months” Zoo – the first private zoo out of Kiev, opened in 2015 where one can not only feed, but also pet animals. It is located near Kyiv, in Demidov village (40 km from Kiev). The main feature is special holes, through which everyone can feed an animal. There are several lakes on the territory of 16 hectares where black swans swim. There is a playground for children and a contact zoo, where children can pet the donkey, lambs and mini-cows. There are also exotic species of animals, one of them is a white blue-eyed Bengal tiger. This breed was bred by man in the 1970s in India. One can also see a white lion, an Asian red wolf, etc.

– Zoo in Mezhyhirya – a menagerie, located in Novy Petrovtsy village near Kyiv (24 km from Kyiv). Mezhyhirya is known as the former residence of Viktor Yanukovich, occupied by him in 2002-2014. Since 2002, during the premiership of Viktor Yanukovych, the residence illegally becomes his property, after which the grandiose construction of the complex begins on the territory. Today Mezhyhirya became a household name, while the place itself became a symbol of corruption. This complex of 140 hectares is enclosed by a 5-meter fence, includes the Honki house, built of eco-friendly wood, the landscape park with lakes, a yacht pier,a equestrian club, shooting gallery, tennis court, greenhouses, baths, hunting grounds and a zoo. In the zoo you can see not only pets, but also exotic. Also there are rare breeds of birds and animals listed in the Red Book of Ukraine.