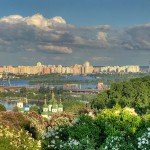 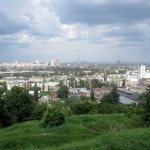 – Grishko Botanical Garden – has been founded since 1935 on the initiative of V.I. Lipsky, a famous florist and scientist. A plot of 117 hectares land was allocated on Zverinets. The difficulties of building a garden were insufficient funding, and two-thirds of the territory was private property. About 1050 species of plants and 1000 taxons of greenhouse crops were managed to collect under the open sky by the beginning of the 1940s. The Botanical Garden has been opened for visitors since 1964. Not only scientists-botanists and breeders come here, but also Kyivans, as well as visitors to the city. The botany lessons are taught here for students. M. Grishko Botanical Garden (world famous scientist-botanist) is a part of the natural reserve fund of Ukraine, it is a monument of natural and historical and cultural significance that is one of the leading gardens in Europe. The Botanical Card is a type of lilac with an area of 2.45 hectares, thousands of visitors come to admire it every spring. On the territory of the botanical garden there are many sightseeing places, from where you can see a beautiful view of the Vydubitsky monastery, the Dnieper slopes, bridges and the left bank of the capital.

– The Bald mountain – is a historical place, named because of its meager vegetation. This place is considered to be mystical. The pagan rituals were held here, as well as the ancient Magi made the first underground passages on Bald Mountain even in the times of Kievan Rus. Later the territory passed to the Pechersky Monastery. The construction of the Lysogorsky Fort of the New Caves Fortress has been started here since 1872. There was a military underground plant on Bald Mountain in the 1930s. There was the base of tanks “Tiger” during the German occupation in the dungeons. The regional landscape park “Bald Mountain” has been created with an area of 137.1 hectares since 1994. The bald mountain is divided into the following three parts: the Mermaid Yar (the mermaids live in the local lake according to the beliefs), the Witch’s Jar and the Dead Grove. The burials of the past centuries were found in the latter ones. Today there is a whole dungeon under the Bald Mountain. It should be noted, that there is a truly beautiful view of the left bank of Kyiv from the Bald Mountain.