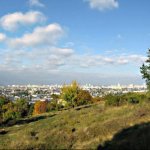 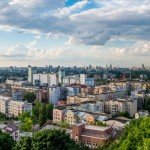 – Yurkovitsa mountain. According to the origins, one of the three brothers-founders of Kiev Horeb was on Yurkovitsa mountain. It goes up to Nizhneyurkovska Street. Today, the territory of the mountain is under construction, what incenses the activists of protection the historical places. The fences blocked the passage to the mountain so that people had only a narrow path. But the mountain offers a beautiful view to Podol.

– Schekavitsa mountain – is located between Tatarka and Podol. It offers a wonderful view to Podol, The River Dnieper and the left bank of Kiev. According to the “Tale of Bygone Years”, the mountain got its name from one of the founders of Kiev Shchek, who settled here. Also according to the origins it is believed that here is the grave of the Prince of Kiev Oleg. The history of the mountain of 18th-19th centuries is associated with burials. In 1772, a cemetery was founded on Shchekavitsa mountain. In the 1860s the Tatars begin to settle here. The first settlers were 60 Tatar families, the main occupation of which were soap making and trade. During the archaeological excavations on Shchekavitsa mountain, the remains of a stone structure of 12th-13th centuries were found. Presumably these are the ruins of the temple. Today, you can admire the beautiful view, make unforgettable photos and even meditate there. Some people say that the mountain can restore health and provide positive energy.