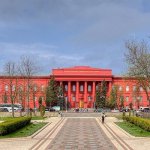 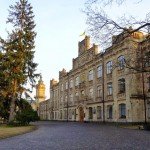 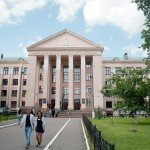 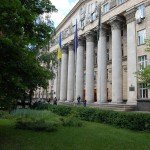 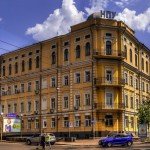 – Taras Shevchenko National University of Kyiv – was built in 1837–1843 by Beretti the architect. The red color of the facade, the black details of columns and cornices correspond to the colors of the Order of St. Volodymyr, whose name was worn by the university. The motto of the Order “Good, Honor and Glory” also became the motto of the university. In the middle of the 19th century the university became the center of science and socio-political worldview of Ukraine. In 1845–1846. Taras Shevchenko himself worked at the Archaeographical department. During the Second World War, the university building was almost completely burnt. Today it is the most prestigious university in Ukraine, which is in the top three of the rating “Top-200 Ukraine”.

– Kyiv Polytechnic Institute – or simply KPI, National Technical University and one of the largest universities in Ukraine. It was founded in 1898 and was located in the premises of the Commercial School on Vorovskogo Street. The first buildings in the neo-Romanesque style appeared in 1901 on the former deserted city outskirts and a park was laid out along the highway. In 1923-1933 and in the following years various institutes were established on the basis of faculties and specialties of the KPI (Kyiv Civil Engineering and Kyiv Road Institute, Odessa Institute of Naval Engineers, etc.). In 1995 KPI received the status of the National Technical University of Ukraine. The central building of the university is worth noticing – this is the main building, decorated with turrets, which served not only as an architectural decoration, but was also used for observation and experiments. Institute housings are of particular importance – training workshops that host the Polytechnic Museum today, which presents various directions for the development of science and technology. In the 1970-1980’s buildings in the style of the Soviet era appeared on the territory, in particular, the library and the Palace of Culture, where concerts and youth events often take place. Today, KPI is the largest university in Ukraine. Since 2016 it is named after I. Sikorsky, who graduated from the university, becoming an outstanding aircraft designer of the XX century.

– Bogomolets National Medical University – is one of the oldest universities in Ukraine. It sprang from the opening in 1841 of the medical faculty at the University of St. Volodymyr (today – Taras Shevchenko National University). In 1853at the faculty was opened the Anatomical Theatre and was called among scientists a palace of science. There were equipped rooms, a library and a collection of anatomical drugs. Anatomical theatre was famous for its unique museum collections of professors A.P. Walter and V. A. Bez, becoming the best in Europe (today – the Museum of Medicine). In the 1920s the faculty was transformed into a separate Kyiv Medical Institute. And in 1946 the institute was given the name of the outstanding academician A.A. Bogomolets. In 1995, the university was given the status of national. Today, the medical university is one of the most prestigious universities. Here, not only Ukrainian students obtain higher education, but also students from different countries of the world.

– Vadym Hetman Kyiv National Economic University (KNEU) – was founded in 1906 as the highest commercial courses on the initiative of the historian Mytrofan Dovnar-Zapolsky. In 1908 the courses were reorganized into a commercial institute, and in 1912 it was equated with the state one. Since 1920 it has been named the Kyiv Institute of National Economy. After that it was renamed repeatedly. Since 2005 the university bears current name. In 1958 the institute housed in a specially built for it building on the Peremogy Avenue, 54/1, where its main building is now located. Today KNEU is considered a prestigious economic university and is a member of various international organizations and programs.

– National Pedagogical Dragomanov University – is one of the oldest universities in Ukraine, founded in 1834 at the University of St. Volodymyr (today – Taras Shevchenko National University) as a “Special Educational Institution”. In 1920 on the basis of the Kyiv University of St. Volodymyr and the Kyiv Higher Women’s Courses, the Kyiv Institute of Public Education was created and was named after the outstanding Ukrainian scientist and public figure M. Dragomanov. In 1933the Kyiv Institute of Higher Education was transformed into the Pedagogical Institute, inheriting the premises, teaching staff, libraries and methods of personnel training. The educational bears the current name since 1997. Today the Pedagogical University is one of the leading universities. It is a part of the European Association of Universities and the International Association of Universities, taking part in many conferences and symposia.