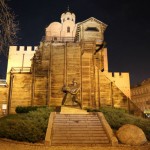 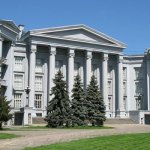 2. The National Museum of History of Ukraine 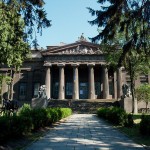 3. The National Art Museum of Ukraine 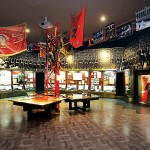 4. The National Museum of Ukrainian History in the II World War 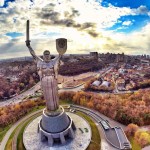 5. The Monument to Motherland 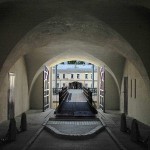 6. The museum of the prison in the “Oblique Caponier” 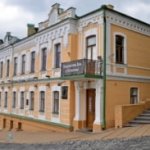 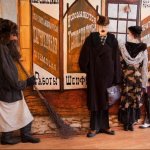 8. Museum of One Street 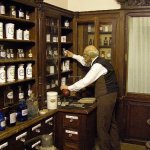 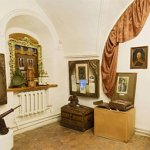 1. Museum “Golden Gate” – the only gates that have survived since the times of Kyivan Rus. This oldest defensive structure of Kyivan Rus served as the main gate of ancient Kyiv, and today it is a symbol of the capital and one of its main sights. The Golden Gate appeared in the time of Prince Yaroslav the Wise and is mentioned in the annals of 1037. Today the Golden Gate is a pavilion-reconstruction, inside of which you can see the original ruins and collect in your mind the image of an old building.

The last reconstruction was carried out in 2007, during which the surviving parts of the gate, which had been preserved since the time of Yaroslav the Wise, were restored. The museum displays expositions about the history and architecture of the Golden Gate. If you come from Zolotovoritska Street and look inside through the iron hertz, you can consider the remains of ancient pylons of different lengths (east – 24 m, western – 13 m), laid out in ancient Byzantine technique “opus mixtum”.

Also preserved fragments of the rivets, made in the masonry technique of the 11th century. These are traces of fortification structures that appeared after the deformation of the walls and arches after attempts to storm. Climbing the stairs to the very top of the structure, you can go to the observation deck and admire the view of the square and the nearby streets of the capital.
Address: Volodymyrska str., 40-a
Contacts: +38(044)278-45-44, +38(044)278-69-19
Work time: Tue from 10:00 to 17:00, Wed – Sun from 10:00 to 18:00, Mon – a day off.
The museum does not work in winter.

2. The National Museum of History of Ukraine – one of the leading museums in Ukraine, founded in 1904. The museum’s funds calculates more than 800 thousand unique monuments of history and culture. Archaeological and numismatic collections are considered particularly valuable. No less interesting are the collections of cold and firearms, ethnography, unique editions of books, glassware and porcelain.

Approximately 10 thousand exhibits include collections of paintings, graphics and sculptures. Also there is a collection of documents of the XV-XXI centuries, Cossack attributes, universals, deeds, letters of hetmans and Cossack petty officers. The branch of the institution is the Museum of Historical Treasures of Ukraine, where unique collections of precious metals and stones are collected. The museum is a real treasure trove of national historical and cultural relics of the people.
Address: Volodymyrska str., 2
Contacts: +38(044)278-48-64
Work time: Mon – Fri from 10:00 to 18:00, Sat – Sun from 11:00 to 19:00.
Open Day: the last Monday of the month.

3. The National Art Museum of Ukraine – the largest museum in Ukraine, has collected masterpieces of Ukrainian and foreign paintings, sculptures and graphics, dating back to the times of Kyivan Rus. Also in the museum is a huge collection of icon painting. For today the collection of the museum amounts 40 thousand exhibits. It was founded by the Ukrainian intelligentsia (intellectuals) in 1899 as the City Museum of Antiques and Arts.

The huge complex of 10 hectares consists of the museum-monument “Motherland”, the square with the avenue of hero cities, the compositions “The crossing of the Dnieper”, “The transfer of weapons” and “Front and rear heroes”, the fire of Glory, The exposition “Tragedy and valor of Afgan” and “On foreign wars”. The complex is one of the largest in Ukraine. The Memorial is a leading research, cultural and educational center on military history of Ukraine. Thousands of visitors from all over the world come here. The complex is an integral part of the historical and architectural landscape of the capital.
Address: Lavrska str., 27
Contacts: +38(044)285-94-57
Work time: Mon – Sun from 10:00 to 18:00
Open Day: May 9, October 14.

5. The Monument to Motherland – was opened in 1981 on the Victory Day and it is included in ten highest statues in the world, whose height is 102 m. The construction from stainless steel is all-welded weighing 450 t. The statue symbolizes the feminine principle, the strength of the spirit of the Ukrainian people and it was established on the slopes of the Dnieper so that it can be seen even in remote areas of Kiev.

There are two elevators and observation platforms, with an impressive view of the city in the monument. One site is located at the feet of the statue at a height of 36 m (the height of a 12-storey building), the other – at a height of 91 m (from the back of the shield above the fingers of the left hand of the sculpture). Today it is the largest sculpture in Ukraine, and it is included in the “Guinness World Records Book of Ukraine”. The Museum of Ukraine in World War II is locted at the foot of the monument.
Address: Lavrska str., 27
Contacts: +38(044)285-94-57
Work time: Mon – Sun from 10:00 to 17:30
The rise is possible in good weather.

Immediately you can see the famous “death row”, in which the convicts were taken to the execution, the prisoners’ belongings, the military uniform of guards and weapons. Within the walls of this prison prisoners were members of the Polish Uprising of 1863, soldiers of the rebellious Selenga Regiment of 1905 and the Sapper Battalion of 1907. The museum in the prison section of the caponier was created in Soviet times. For those who are not afraid, in the walls of the museum-prison there are guided tours.
Address: Hospitalna str., 24
Contacts: +38(044)288-23-41
Work time: Mon – Sun from 10:00 to 18:00.

7. Bulgakov House – the famous literary and memorial museum of the capital today. The house itself was built in 1888 due to the project of N. Gordenin, a Kiev architect, and the customers were the merchant family of Litoshenko (the mansion was intended for the owner’s wife). One and a half floors of the building were built of stone, the top wooden floor, was bricked, the roof was covered with iron.

Within some time, several buildings were added to the main building, the new owner of the estate of four houses became Z.Mirovych, a merchant and a personal honorary citizen of the city. All the buildings were leased, and the apartment on the first floor was the most expensive. In 1906, the tenants of this apartment became the family of Afanasy Bulgakov the Professor of the Kiev Theological Academy, renting an apartment on the first floor. So, from 1906 to 1919 years the world-famous writer Mikhail Bulgakov lived and worked in the Building No. 13 located on the Andriivskyi Descent.

The house wasn’t different from neighboring ones for many years. But in 1967 in the popular magazine “New World” of that time was published an essay by Viktor Nekrasov, a Kiev writer of “The House of Turbins”. That’s right, Kievans began to call the Building No. 13 by the name of the fictional Bulgakov literary heroes, the Turbin family. Today it is the only museum in the world where Bulgakov’s relics are collected. The decision to create a literary-memorial museum of Mikhail Bulgakov was made in 1989. Only in 1993, the museum began to be visited. Today it’s not just a building, it’s a Legend-House.
Address: Andriivsky Descent, 13
Contacts: +38(044)425-31-88
Work time: Mon, Tue, Thu – Sun from 10:00 to 18:00, Wed – a day off.

8. Museum of One Street – the first private museum in Kyiv, whose collection is dedicated to the history of St. Andrew’s descent and its inhabitants. For the exposition were used items from the turn of the 19th century and the beginning of the 20th century. Getting here, plunging into a nostalgic atmosphere, as if travelling by the time machine. The museum was founded in 1991 in the room of the old house 22-b. Crossing the threshold of the museum, you get into the atmosphere of the last century. Here you can imagine what the boudoir looked like with a full set of ladies’ toilet items, a dining room with a table, interiors of workshops and shops.

In the museum, retro music plays, which gives exploration to the realities of the past. The museum amounts more than 6 thousand exhibits – old photographs, engravings, ladies’ dresses, umbrellas and hats, men’s tuxedos and cylinders, gloves, handbags, playing cards, banknotes, phonographs and cutlery, American typewriter, National cash register – evidence of a bygone era. The museum has many rare autographs and books – original manuscripts and photographs of Vertynsky, Bulgakov’s novel The Days of the Turbins (1927) and his Therapeutic Directory by Dr. M. Schnirer.

The collection of the museum is dedicated to the history of the Andriivsky Descent and to its famous inhabitants – M. Bulgakov, H. Tyutyunnyk, M. Grabovsky, A. Muraviev, F. Krasitsky and many other figures of science and culture, whose names are not only praised Kyiv, but all Ukraine. In the museum there are exhibitions and interesting projects, for example, which are dedicated to famous women: Edith Piaf, Marlene Dietrich, Claudia Shulzhenko, Evit Peron. Posthumous masks of famous people are exhibited.

Well, a real excitement of the public was caused by an exhibition dedicated to the public houses of the Andriivsky Descent. In 2002 The Museum of One Street became the first member of the European Museum Foundation from Ukraine. On the eve in Luxembourg, the results of the prestigious international competition “The Best European Museum of the Year” were announced. Bypassing eminent competitors from Italy, Greece, among the winners was a small Kyiv museum from Andriivsky descent.
Address: Andriivsky Descent, 2-b
Contacts: +38(044)425-03-98
Work time: Mon – Sun from 12:00 to 18:00.

9. Anatomical theatre – the building at Bohdan Khmelnytsky Street, built in 1851-1853 years (architect A. Beretti). The Anatomical Theatre of the Medical Faculty of the Kyiv University of St. Volodymyr (today – the National University named after T. Shevchenko) was opened in 1853, and was called among scientists a palace of science. There were equipped rooms, a library and a collection of anatomical drugs.

The Anatomical theatre was famous for its unique museum collections of professors A.P. Walter and V. A. Bez, becoming the best in Europe. Famous doctors with a world-famous name worked here, great discoveries were made, which not only made famous the University of Kyiv, but also the native medical science. Since 1973, the building houses the Museum of Medicine, which today is one of the largest medical museums in Europe. The building is an architectural monument.
Address: Bohdan Khmelnytsky str., 37
Contacts: +38(044)234-15-74
Work time: Mon – Sat from 09:30 to 18:00, Sun – a day off.

10. The Hetman’s Museum – opened in 1993. The Hetman’s Museum in Kyiv tells about one of the most interesting milestones in the history of Ukraine – the era of the hetman power. Here there are more than 6000 exhibits associated with the administration of the hetmans. The permanent exhibition includes 4 halls dedicated to Ivan Mazepa, Bogdan Khmelnytsky, Pylyp Orlyk and Pavlo Skoropadsky.

Among the most important exhibits of the museum are part of the hetman’s club of the 13th century, the Khmelnytsky’s family coat of arms, confirming the noble birth of the hetman, personal belongings of Pavlo Skoropadsky and others. The museum locates in a remarkable architectural monument of the late 17th century, known in Kyiv as “the house of Hetman Ivan Mazepa” (although the hetman here has never lived). The house, which survived the fire of Kyiv Podil in 1811, is one of the oldest civil buildings in Kyiv.

The two-stored mansion in the Baroque style typical for Cossack architecture was built during the reign of I. Mazepa. Traditionally, the people of Kyiv call it the hetman’s name, although there is no reliable information that Mazepa lived here. Since 1717 the house was owned by the Cossack-philistine family of Sychevsky, whose representatives were members of the city magistrate. Among the few Podolsky mansions, this house survived in the fire of 1811. During the reconstruction of Podil, a second floor and a pediment with columns were completed. In Soviet times, there were communal apartments.
Address: Spaska str., 16-b
Contacts: +38(044)425-55-49
Work time: Mon – Thu, Sat, Sun from 10:00 to 17:00, Fri – a day off.
Open Day: the last Monday of the month.