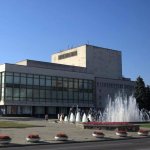 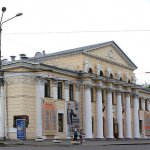 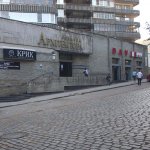 The One Actor Theater “KRIK” 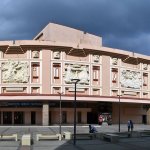 The Music and Drama Academic Theater named after T. Shevchenko 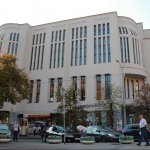 The Philharmony named after Kogan

The Dnipropetrovsk Academic Opera and Ballet Theater – was founded in 1974 and is located on the Dmytro Yavornytsky avenue. The building of the theater is built on the site of the Kids’ Park named after Wojciechowicz. It is worth noting the peculiarity of the building in its external and internal decor. The main decoration of the theater is the “Muse” light and musical fountain, installed in front of the central entrance to the building. From 1974 to 1994, the main conductor was Petr Varrvoda. The outstanding soloists of the theater of that time were Yu. Sabin-Gus, N. Surzhyna, A. Vostriakov and N. Poludennyi. The first recognition of the Dnipropetrovsk Opera and Ballet Theater came in 1988 after appearances on the stage of the Bolshoi Theater (Moscow). Since the early 1990s the theater started active tours, performing in Italy, France, China and the United States. There appeared a bunch of talented ballet dancers (Anna Dorosh, Maxym Chepyk) and opera singers (Victor Lutsiuk, Eduard Sribnytskyi). In 1993, a choreographic school was established at the theater. Since 2003, the theater has been awarded the academic title. The playbill presents all genres of musical theater: opera, ballet, musical fairy tale, operetta and ballet performances.
Address: D. Yavornitsky Ave., 72-а
Contacts: +38(056)778-44-69

The Dnipro Academic Drama and Comedy Theater – is a neoclassical building erected in 1906-1907. It is a monument of architecture of national importance (architect F. Bulacel). It was built on the territory of the City Garden as a theatrical area, called the “New Winter Thater”. The Winter Theater had 1200 seats with a large stage, a spacious stalls and four tiers for lodges. Before the revolution, F. Shaliapin, L. Sobinov, A. Nezhdanova, and others performed here. This is the place where the first city stationary theatrical company appeared under the leadership of E. Biliiaev. In 1927, the theater first gained its status and opened with the premiere of the play “Lubov Yarova” by K. Trenev. Before the war the theater was reconstructed (architect A. Krasnoselskiy). The building acquired classical forms, while the facade was decorated with columns, pilasters and sculptural images of the muses of art. After the Second World War, the building of the theater was again reconstructed. In 1958 the theater resumed its work and to this day pleases the spectators with performances that complement the golden fund of the theatrical art of Ukraine.
Address: D. Yavornitsky Ave., 97
Contacts: +38(056)377-49-58

The One Actor Theater “KRIK” – is a Ukrainian academic theater founded in Dnipro in 1989 and since 1996 located in the Architect’s House. Initially, the theater was located in the former museum of Komsomol named after A. Matrosov (Cathedral Square). It was the theater, where an actor was a director, a screenwriter, an artist, and a make-up artist at the same time. This person is People’s Artist of Ukraine Mykhailo Melnyk. Mykhailo Melnyk is a laureate of the First Republican Readers’ Competition named after Shevchenko, as well as a laureate of the International L. Kurbas Prize. The theater “KRIK” is extremely popular among young people.
Address: Grushevskogo Str., 1
Contacts: +38(067)497-80-11

The Dnipro Ukrainian Music and Drama Academic Theater named after T. Shevchenko – was built in 1913. It is an architectural monument. The two-story structure with an asymmetric composition initially housed the English club. In 1918 the first professional theater in Ukraine was founded in Kyiv and operated in the capital until 1922. In 5 years the theater performed in different parts of Ukraine until it settled in Dnipropetrovsk in 1927. Since that time Dnipro has become the permanent place of the theater, located on the Voskresenska, 5. In 1993, the busts of I. Franko, G. Skvoroda, L.Ukrainka, V.Vinnichenko and V. Stus were installed on the theater building. Since 2017, the theater has a kids’ theater studio. Today the repertoire of the theater still features performances based on works by Ukrainian, foreign and contemporary playwrights.
Address: Voskresenska Str., 5
Contacts: +38(056)785-46-72

The Philharmony named after Kogan – is a monument of architecture of national importance. It was built in 1911-1913 according to the project of the academician of architecture A.Ginzburg as a Theater Club for the Public Assembly. The building in the style of constructivism was a high-rise frame tower type structure. It had a peculiar facade, some elements of Art Nouveau and Gothic style added and reinforced concrete applied. In the Soviet era, there was a club of railway workers. In 2001 the building was transferred to the balance of the regional philharmonic society. Today it is the Dnipropetrovsk Region Philharmonic Society named after Kogan.
Address: Voskresenska Str., 6
Contacts: +38(056)372-96-20