The Jewish Educational establishments in Kyiv 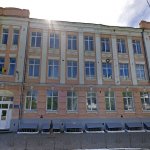 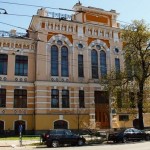 – Former Talmud Torah – Jewish religious school on the Kostyantynivska Str., 35. It was a free school, where Jewish boys from poor families and orphans could get an elementary education. The building was built in 1910-1911 according to the project of the architect F. Essen on the means of the Jewish public figure and philanthropist David Margolin. Today in the building houses the secondary school №10. Also Margolin financed the construction of municipal sewerage and the first tram lines of the capital. He was the founder of the Kyiv Gas Society and the Water Supply Society.

– Solomon Brodsky Jewish School – a building on Antonovycha street, 69 was constructed in 1903-1904 by the architect A. Minkus in the style of historicism. The Brodsky sugar factories financed the construction. The building was occupied by a two-year Jewish school for 300 boys with a craft department for 100 students. A graphic artist and a painter Zynoviy Tolkachov was among its students. After 1917, M.Ratmansky vocational school was located there, the Institute of Electric Welding of the Academy of Sciences of the Ukrainian SSR (now the Interdisciplinary Scientific and Technical Complex “The E. Paton Electric Welding Institute of the National Academy of Sciences of Ukraine”) was located there since 1944. E.Paton – the great scientist and the founder of electric welding – worked there in 1944-1953. There is a memorial plaque to E. Paton on the facade of the building.