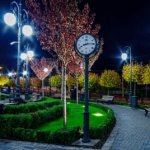 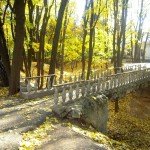 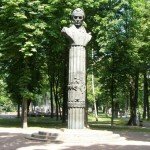 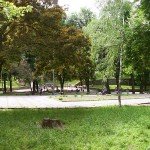 – Park named after Heydar Aliyev – is opened in 2013 and located next to the embassy of Azerbaijan. It is named after the President of Azerbaijan. The exposition includes a cascade fountain, a copy of the wall of Baku fortress, an eastern carpet made of murano glass and ceramics (a copy of “Sheikh Safi” carpet) and a monument of H. Aliyev. In the park there are magnolia, maple, yew, sakura, quince, barberry, dogwood, plum and acacia. Above the fountain there is an emblem of the Shirvanshahs state, which symbolizes the power of the state. The emblem of the Shirvanshahs state depicting two lions and a bull’s head is the ancient heraldic symbol of Baku. The images of lions symbolize fortress walls, and the bull’s head symbolizes the city of Baku. There is a map of Azerbaijan in the park, which is made in the form of flower bed symbolizing the peace and unity of people. The park particularly is beautiful in the evening. It was created as a gift to Kiev inhabitants from the Azerbaijani people for the 90th anniversary of H. Aliyev at the expense of the state corporation of Azerbaijan “Sokar”.

– “Khrushchev’s Dacha” – a small park at Lukyanivka, laid out in the Kmytovy Yar. On the territory there is a mansion of the nineteenth century in the neo-Renaissance style, built for assistant of the druggist Belsky. Later Belsky opened his own pharmacy and purchased a neighbouring site, where he built another house, similar to the first one. Since 1934 the people’s commissar of internal affairs of the Ukrainian SSR Vsevolod Balitsky lived in the estate. In that time the park was refined – bridges, arbours, statues and fountains appeared. After World War II, Nikita Khrushchev lived here for a while, after which the park was unofficially called Khrushchev’s dacha. In the time of Khrushchev in the park there were ponds with fish, a cage with a bear and peacocks walking around the territory. The estate was the residence of the first secretaries of the Central Committee till the 1970s. Today in the park locates the Institute of Pediatrics, Obstetrics and Gynecology, and in the mansion houses the administration. Inside the house there are oak staircases, an interior of the hall for meetings with a crystal chandelier and a fireplace made of black stone in the modern style.

– The public garden named after Ivan Kotlyarevsky – a small public garden of triangular shape, located at the fork of the Melnykova and Herzena streets. At the end of XIX century on this place was built a chapel around which a park was laid out. In the Soviet times, the chapel was destroyed, and 50 years later a monument to Ukrainian writer I. Kotlyarevsky was erected in its place. Although the public garden is small, but very beautiful – fountains, benches, flower beds, playground. On the territory there is one building – this is a two-storeyed pink building, in which there is an urban women resource centre. In the centre there are exhibitions “The Ward of the Ukrainian capital” and “Portraits of women in whose honour called the Kyiv streets”. And recently in front of the building appeared forged fairy-tale figures – a girl with a dog, butterfly, heart, etc.

– “Pavlovsky Garden” – a public garden (area – 1.8 hectares), hidden among the quiet streets of Kyiv, is located at the intersection of Gogol, Pavlovska and Vynnychenko streets. It was founded in the period of 1905-1909 during the construction of the first houses. In the public garden there is a circular alley, which is very convenient for jogging. Nearby there is a kindergarten and a school, that’s why there are always a lot of kids here. There is a large playground for them in the park. The park adjoins the territory of the astronomical observatory, created in1845.