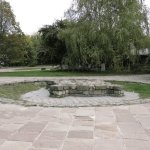 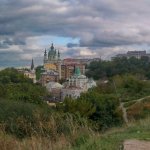 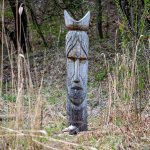 The pagan temple (The Bald Mountain)

The Pagan Temple (Starokyivska Hill) – is the temple located near the Historical Museum, not far from the Andrew’s descent. It is one of the most famous temples, the base of which is recreated on the Starokyivska mountain. Hundreds of years ago there was an altar here, i.e. a place of worship and sacrifice to the pagan gods. Probably, it was the temple of Perun that was the cult center of the Poliana principality, later – Kievan Rus.

During excavation, a huge amount of ash, bones, mainly of animal origin, was discovered here. The temple is a stone circle with four ledges pointing to the sides of the world. The first to study the temple was Vikentii Khvoika, an archaeologist, who unearthed it in 1908. He believed that these remains belonged to a pagan shrine, and the pillar served as an altar on which sacrifices were performed for a long time. The temple dates back to the 6th-7th centuries.

The Castle Hill – is a high hill with a history of several thousand years, was one of the central parts of Kiev during the Kievan Rus, fortified by defensive structures. It was a handicraft district of the capital city. In the times of Ancient Rus, the mountain was called Horivytsia (also known as Kyselivka and Florivska), since the 15th century it becomes a Castle (Zamkovaya) Hill. The origin of this name is associated with the construction of a wooden castle built after the entry of Kiev into the Lithuanian principality in 1363.

But there is also a version that the fortifications were erected by Kievans, as Khan Batu devastated Kiev in 1240, destroyed the fortress on the Ancient Kiev Mountain, located not far from it. In 1840, the Castle Hill passed to the Florovsky Convent to the cemetery. In 1921, the cemetery was closed, and with the outbreak of the Great Patriotic War in 1941, a military unit was located on the Castle Hill, which served as a radio station built here.

It was used to mute the signals of foreign broadcasting stations. At the same time, the military conducted the necessary communications on the mountain, finally destroying the surviving sections of the old cemetery. In the 1990s, the radio station was dismantled for uselessly, and the building of the military unit was dismantled for building materials. Today the mountain is an ambiguous place, with which many legends and mystics are associated. Rising 80m. above the Dnieper, the Castle Hill offers an excellent view of Podol, Andriivsky Descent, St. Andrew’s Church and Vozdvyzhenka District.

The pagan temple (The Bald Mountain) – is a pagan sanctuary of native believers on the Bald Mountain, where pagan rituals were held even in the times of Kievan Rus. The tops of the hills with the strong energy of the Earth have been chosen as temples since ancient times, cleansing them of trees, bushes and grass. The top of the mountain became bald, hence the name. here are figures of deities from thick logs – pagan idols in the center of the temple.

According to some sources, these are idols of traditional pagan deities – Perun, Roda, Svarog and Yarila. All deities are set on the sides of the world, symbolizing the seasons. There is also an altar stone with ancient runes carved on it, the sacrifices were made on it. The place is considered to be mystical. Today, one can meet people behind rituals in the place of the accumulation of earthly power, as well as people studying this locality. This place is also interesting for tourists who like extraordinary and amazing excursions.