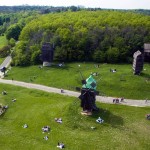 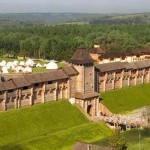 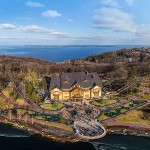 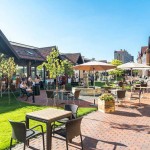 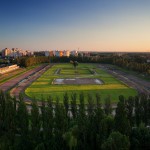 – The open-air museum “Pyrogovo” – an ethnographic outdoor museum of folk architecture and mode of life, the largest in Ukraine (22 km from Kiev). This is an architectural and landscape complex, founded in 1969, where the history of all ethnographic regions of Ukraine is collected. The dwellings of Poltavschyna, Prydniprovyie, Kyivschyna and Polissya can be seen there. The oldest house shown in museum belongs to the XVI century.

The unique feature of the museum is that a lot of houses presented there are original and were brought from many regions of Ukraine and constructed on the museum’s territory. A lot of objects of national mode of life can be seen in those houses – dishes, towels (rushnyk), clothes and household items. Apart from the houses there are also mills, pagan stone idols and Orthodox churches. One can not only learn more about the folk architecture and national mode of life in the museum but about folk traditions as well.

– The “Kyivan Rus” park – a grandiose scientific project designed to recreate the cultural and architectural image of the city of Volodymir or Kyiv’s Detinets in the V-XIII centuries in its historical size of 10 hectares, as well as the recreation of the atmosphere of Kyivan Rus (48 km from Kiev). This project has no analogues in the world. There are entrance gates with watchtowers, the network of roads of Ancient Kyiv, manors of the 11th-12th centuries, commercial shops of artisans of the 11th-13th centuries, and the prince’s court with stands.

A collection of horses of historical breeds is also located in the park. Every year there are cultural and historical festivals and championships in ancient sports – medieval tournaments and knight battles. The guests are offered a lot of entertaining activities – throwing knives, archery, horseback riding and participation in ancient Slavic games. In order to fully immerse yourself in the atmosphere of that time, you can rent historical costumes. The park is recognized by national and international organizations.

– Mezhyhirya – a tract located in Novy Petrovtsy village near Kiev and is known as the former residence of Viktor Yanukovich, occupied by him in 2002-2014 (24 km from Kyiv). The Spaso-Preobrazhensky Mezhigirsky Monastery of the late 14th century was located on the territory until 1935. In 1935, the monastery was demolished for construction of the government suburban residence. A collection of hand-written books was found during the demolition, presumably from the lost library of Yaroslav the Wise.

Since 1935 Mezhyhirya was the state government residence. Since 2002, during the premiership of Viktor Yanukovych, the residence illegally becomes his property, after which the grandiose construction of the complex begins on the territory. Today, this complex of 140 hectares is enclosed by a 5-meter fence, includes a yacht pier, equestrian club, shooting gallery, tennis court, greenhouses, baths, hunting grounds and a zoo.

The main landmark is the Honki house, built of eco-friendly wood. There is a lake on the territory, which is filled with water from ten Arthesian wells. Mezhyhirya became a household name, while the place itself became a symbol of corruption. Extraordinary sumptuousness and unparalleled natural scenery can be seen with one’s own eyes with a guided tour every day.

– Manufactura – the first outlet-town, opened in 2013 near Kyiv, in Khodoseevka village (25 km from Kyiv). A number of stock stores are designed in the European style of ancient cities. This format of the shopping center is popular in the US and Europe, where first local stores appeared more than a century ago near large textile mills, offering discounted goods to workers.

There one can see collections of clothing and accessories from well-known brands with constant discounts from up to 70%. There are also restaurants, cafes and pastry shops, a children’s playground and a special “dad’s area” with Wi-Fi. In addition, there is a mini-hotel in the outlet. Nearby one can find a fitness club, a bowling alley, a shooting range, cinema “Butterfly Country” and a hypermarket.

– Kyiv Hippodrome – was built by the end of the 1960s. The first competitions took place in September 1966. In the 1970s near the hippodrome began to build an ice stadium and the residential community of Teremky. The modern hippodrome is a complex of buildings, which is located on the area of 45 hectares.

During the period of work the Kyiv Hippodrome were set 351 records,35 of which are all-Union and 1 absolute. The hippodrome has a capacity up to 400 horses a year, 3 tracks, 10 stables, a competitive field. On this arena man teaches riding, puts to the test trotters, holds competitions, and also gives riding lessons.