Museums in Pechersk of Kiev 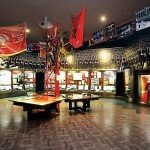 The National Museum of Ukrainian History in the II World War 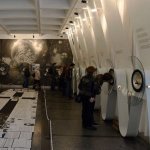 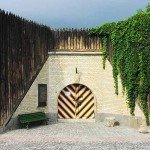 The Museum of the Prison in the “Oblique Caponier” 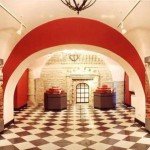 The Museum of Historical Treasures of Ukraine 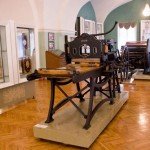 The Museum of the Book and Printing of Ukraine 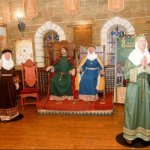 Museum “The Formation of the Ukrainian Nation” 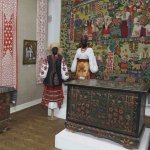 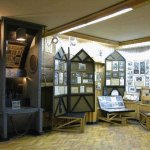 Museum of Theater and Cinema 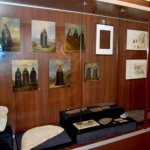 Museum of the Lavra History

– The National Museum of Ukrainian History in the Second World War – was opened on May 9, 1981 and it is devoted to the victory of Ukraine over Nazism in the Second World War of 1939–1945. It is located on the Pechersky hills above the Dnieper, that is why the terrain has been significantly changed. The huge complex of 10 hectares consists of the museum-monument “Motherland”, the square with the avenue of hero cities, the compositions “The crossing of the Dnieper”, “The transfer of weapons” and “Front and rear heroes”, the fire of Glory, The exposition “Tragedy and valor of Afgan” and “On foreign wars”. The complex is one of the largest in Ukraine. The Memorial is a leading research, cultural and educational center on military history of Ukraine. Thousands of visitors from all over the world come here. The complex is an integral part of the historical and architectural landscape of the capital.
Address: Lavrska str., 27
Contacts: +38(044)285-94-57
Work time: Mon – Sun from 10:00 to 18:00
Open Day: May 9, October 14.

– The Museum of Microminiatures – was created in 1977 by the world-famous Ukrainian master Mykola Syadrysty and is located in one of the buildings on the territory of the Kyiv-Pechersk Lavra. The peculiarity is that all products are created manually by the author’s own technology. Only in the Museum of Microminiatures you can see unique works that amaze with utterly small dimensions. For example, a caravan of golden camels in the eye of needle, score on a glass petal of chrysanthemum 2 × 5 mm, the shoddy flea, a chessboard with figures on the head of a pin and the world’s smallest book “Kobzar”(0.6 mm size). The book has 12 pages with T.Shevchenko poems and drawings and recorded in the Guinness Book of Records. The works of Mykola Syadrysty are also in the museum of Andorra.
Address: Lavrska str., 9
Contacts: +38(044)280-81-37
Work time: Mon, Wed – Sun from 09:00 to 18:00, Tue – a day off.

– The Museum of the Prison in the “Oblique Caponier” – created in the early XX century in the “Oblique Caponier” in the place where there used to be a prison for political prisoners. For the cruelty that was in the prison, the people called it “Kyiv Shlisselburg.” Underground corridors of the prison lead to the prison cells, where instead of a bed is straw, punishment cells and death row cells. Immediately you can see the famous “death row”, in which the convicts were taken to the execution, the prisoners’ belongings, the military uniform of guards and weapons. Within the walls of this prison prisoners were members of the Polish Uprising of 1863, soldiers of the rebellious Selenga Regiment of 1905 and the Sapper Battalion of 1907. The museum in the prison section of the caponier was created in Soviet times. For those who are not afraid, in the walls of the museum-prison there are guided tours.
Address: Hospitalna str., 24
Contacts: +38(044)288-23-41
Work time: Mon – Sun from 10:00 to 18:00.

– The Museum of Historical Treasures of Ukraine – was founded in 1969 and is located in one of the buildings on the territory of the Kyiv-Pechersk Lavra. The museum has one of the richest collections of gold products in the countries of Eastern Europe and is a kind of precious chronicle of Ukraine from the Bronze Age to the present days. The museum has up to 60 thousand items of archaeology and domestic art from precious stones and metals. Among the exhibits there are famous treasures of burial mounds ” The Haymanov’s Grave”, “The Thick Grave”, “Oguz” – Scythian burials dating from the 4th century BC. The masterpiece of the collection is the famous gold Scythian pectoral, which was found in the burial “The Thick Grave”.
Address: Lavrska str., 9
Contacts: +38(044)280-13-96
Work time: Tue – Sun from 10:00 to 16:45, Mon – a day off.

– The Museum of the Book and Printing of Ukraine – was founded in 1975 and is located in one of the buildings on the territory of the Kyiv-Pechersk Lavra. The museum has up to 60 thousand exhibits, reflecting the history of the book and book business from the times of Kyivan Rus to the present day. Here you can see old typewriters, paper and prints. The premises of the museum are located in the building of the Printing House of the Lavra, which was founded in 1615. The type-foundry workshop has been preserved in the courtyard.
Address: Lavrska str., 9
Contacts: +38(044)280-79-76
Work time: Mon, Wed – Sun from 10:00 to 17:00, Tue – a day off.

– Museum “Making of the Ukrainian Nation” – the first innovative museum of Ukrainian history, where the past is combined with modern technologies. It’s a state-of-the-art museum, in which the glorious chapters of our history come to life. You can see 25 exhibits featuring historic scenes with absolutely realistic 3-D figures of national heroes — kings, hetmans, military leaders, scholars, artists and sportsmen.
Address: Lavrska str., 27
Contacts: +38(099)015-04-52
Work time: Mon – Sun from 09:00 to 20:00

– Museum of Ukrainian Folk Decorative Art – was established in late 1899. Since 1954, it has been located on the territory of the Lavra in historical buildings, which are architectural monuments of the XVIII – early ХХ centuries. The museum fund occupies 1.5 thousand m2 and has more than 75 thousand exhibits. Here you can see such craftsmanship items as woven rugs, towels, Easter eggs, wood, leather, metal, ceramics, etc. Among antiques, you will find a silver-framed cross (1576), Cossack tubes (XVIII-XIX centuries), and woven silk belts (XVIII century). The main highlight of the fund is a collection of Ukrainian clothing from different regions (XIX – XXV centuries). The museum contains works by K. Bilokur that belong to the treasury of world art, and a collection of works by M. Prymachenko, which has over 500 compositions by the author.
Address: Lavrska str., 9
Contacts: +38(044)280-13-43
Work time: Mon, Wed – Sun from 10:00 to 18:00, Tue – a day off.
Open Day: last Monday of the month.

– Museum of Theater, Music and Cinema of Ukraine – was founded in 1923 at the Berezil Theater under the direction of Les Kurbas. In 1926, it was transferred to the territory of the Kyiv Pechersk Lavra. In 1934, it was reorganized into the state theater arts museum. The pre-war collection comprised up to 60 thousand exhibits. There was a library of its own. It consisted of 9 thousand volumes. The museum got its modern name in 1965 after expanding its structure with departments of music, cinema, and also Ukrainian folk musical instruments. An important stage was the creation in the 1980s of the exposition, designed according to the figurative-plot principle and dedicated to the development of the theater in Ukraine from the beginnings to the middle of the 20th century. Today the museum contains exhibits, including unique collections on the history of Ukrainian culture. The expositions reveal the formation and development of Ukrainian dramaturgy and stage art. The museum also contains a rich library of art literature. There is a collection of banduras, which includes 282 musical instruments.
Address: Lavrska str., 9
Contacts: +38(044)280-18-34
Work time: Mon, Wed – Sun from 10:00 to 17:00, Tue – a day off.
Open Day: last Monday of the month.

– Museum of the History of the Lavra – is located in the former cells of the Lavra (building 3). It occupies 20 exhibition halls with 900 objects of the fund, the oldest of which dates with the 10th – 12th centuries. The expositions demonstrate the history of the foundation of the Pechersky Monastery as the main shrine of Ukraine. You will also learn about the outstanding servants of the Lavra, the unique Lavra necropolis, and the foundation of a museum town reserve. Here you can see archived photos and newsreels.
Address: Lavrska str., 9
Contacts: +38(044)280-81-37
Work time: Mon, Wed – Sun from 10:00 to 18:00, Tue – a day off.