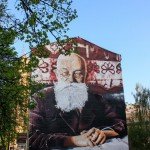 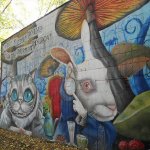 Mural on the Baggovutivska Street, 26 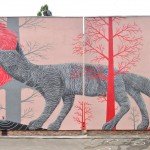 Mural on the Belorussian Street, 15а 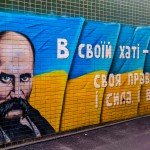 Mural on the N. Murashko Street, 2 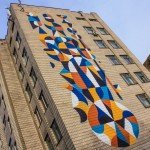 Mural on the Observatorna Street, 3a

– Mural on the Sichovykh Striltsiv Street, 75 – created in 2015 by Kailas-V, which specializes in street art projects. Mural “Mykhailo Hrushevsky” is a portrait of an outstanding Ukrainian historian and politician Mykhailo Serhiiovych Hrushevsky. The creation of the picture was timed to the 150th anniversary of M.Hrushevsky.

– Mural on the Bagovutivska Street, 26 – created in 2014 by a team of Ukrainian street art artists “UpTown”. The picture entitled “Alice in Wonderland” depicts characters from the children’s tale of the same name – a smiling Cheshire Cat and a White Rabbit with a clock.

– Mural on the Bіloruska Street, 15а – created in 2017 by Israeli artist Igor KLONE and is called “In this we are all together”. Mural is based on the story of the Ukrainian folk tale “Cunning Cockerel” and consists of two paintings, placed on two different walls of the facade. On one wall is a large gray tree and a fox catching a red rooster, on the other there is a mahogany and a red rooster, which is already catching the tail of a fox.

– Mural on the N. Murashko Street, 2 – created in 2014. Mural “Taras Shevchenko” created in honour of the outstanding Ukrainian poet T. Shevchenko is a portrait of the poet in the background of the Ukrainian yellow-blue flag with the coat of arms of Ukraine. In the middle of the picture there is an inscription “In its house – its own truth, and strength, and will”.

– Mural on the Observatorna Street, 3a – created in 2015 by the French artist Guillaume Albi (Remed) within the framework of the festival “French Spring”, which is held annually in Ukraine. Mural “Nomme habile” is a person depicted in the image of bright geometric figures, who holds in one hand a metaphorical club-key, and in the other – a bird as a symbol of peace.