Monasteries out of Kiev 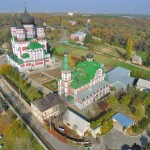 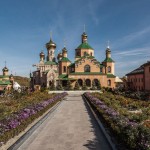 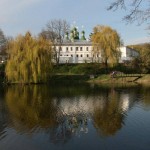 – St. Panteleimon Monastery – a convent on the territory of Feofania current name is taken on behalf of the Chyhyryn bishop – Feofan, the abbot of the St. Michael’s Golden-Domed Monastery, who received a plot for the construction of a summer residence. The main temple of the nunnery was the St. Panteleimon Cathedral, built in the period of 1905-1912 on the territory of the male hermitage, which was attached to the St. Michael’s Golden-Domed Monastery.

Before the revolution, four temples were built here – the Miracle of the Archangel Michael, All Saints, the Volodymyr Icon of the Mother of God and the Cathedral of St. Panteleimon the Great Martyr. During the World War II the monastery was greatly damaged. In the post-war years, the experimental platforms of the Institute of Mechanics of the Academy of Sciences of the Ukrainian SSR were located here. The object was referred to the category of higher secrecy. Since 1990 the monastery was given to the Ukrainian Orthodox Church.

Later the temple was renamed in honour of the icon of the Mother of God, and in 1852 the monastery began to be called the Holy Protection Church. Since 1996 began the construction of new churches and the restoration of the hermitage. So in 2005 the St. Nicholas-Tikhvin Nunnery was built nearby.

After the archaeological researches in 1993-1994 were built caves with a length of about 100 m, in which is located the Temple of St. Dositheus. Since 1996 the convent has the status of an independent monastery – the Kytaiv Holy Trinity Monastery. The modern monastery is a complex of buildings, the main of which is the Holy Trinity Temple and the Church of the Holy Twelve Apostles, where the relics of all the twelve holy apostles are collected. Today the monastery is a place of pilgrimage for the Orthodox world.