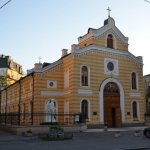 St. Catherine Lutheran Church – was founded in 1812 (Luteranska Street, 22). It was built on the money of churchwardens, who mortgaged their own houses, and a few years later an organ was bought for the church. According to historical data the interior of the church was distinguished by unusual grace and simplicity, the face of the Apostle Paul and the portrait of M. Luther decorated the church. The modern building of the church in the Gothic style was founded in 1855 without changing the original features.

The church was also famous for its unusually acoustics. A Lutheran school was established near the church, in which classes were held in German. The Lutheran Church gave the name to the street. With the advent of Soviet power in 1937 the church was closed and a warehouse was placed there. And after more than 30 years the church building was transferred to the Directorate of the State Museum of Folk Architecture and Life. And only in the late 1990-s the church premises were returned to the Lutherans.