We invite you to excursions to the memorial complex dedicated to the Second World War and other wars. This is one of the largest memorials in Ukraine, where you can see military equipment, 5-meter sculptures, as well as a museum with up to 15000 exhibits. The main object of the museum town is the Monument to Woman Motherland, wherein you will find both museum expositions, and observation decks. At the end everyone will be able to climb the observation “Landscape” at an altitude of 36.6 m or visit one of the helicopter booths. Duration – 2-3 hours. 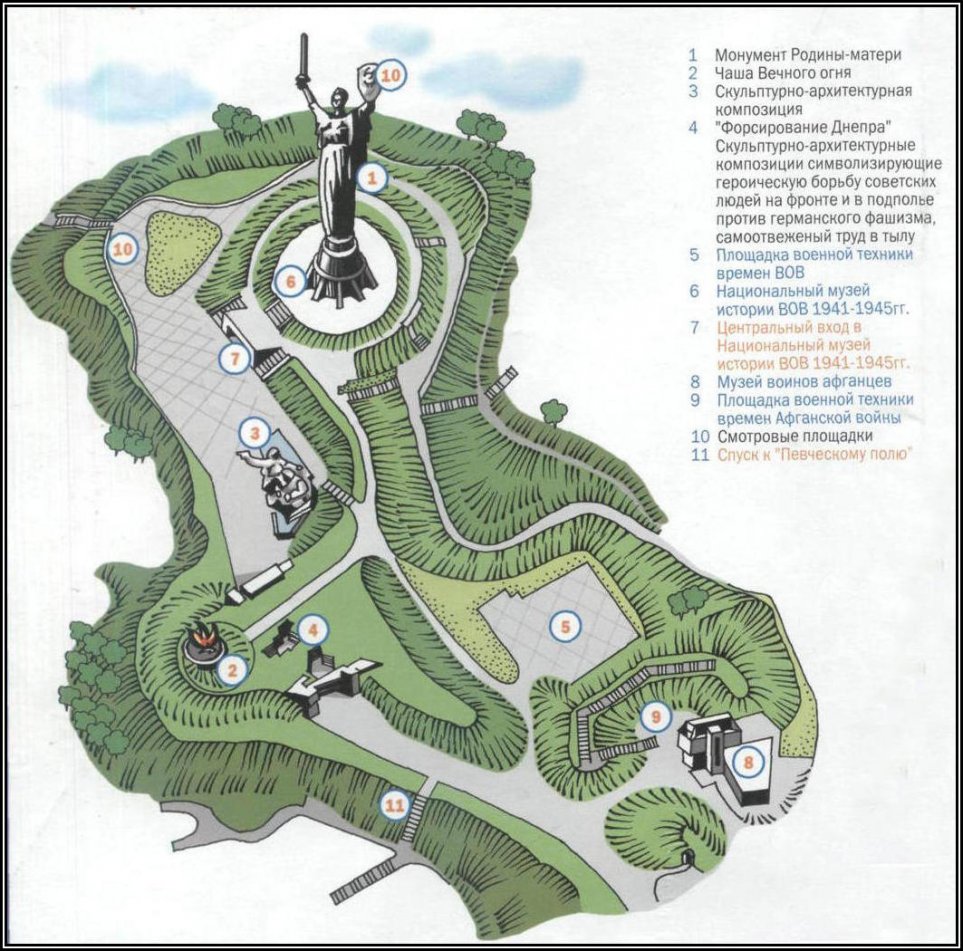 National Museum of the History of Ukraine in World War II. The memorial complex is one of the large-scale objects of Ukraine (with an area of more than 11.24 hectares) located in Pechersk. Museum collections of the Memorial number up to 300 thousand exhibits representing artifacts from the period of World War II, the pre-war and post-war periods. The complex consists of the main exposition, the Mother Motherland monument, sculptural compositions, an exhibition of military equipment, as well as the exposition On Foreign Wars. Expositions embody the heroism and dedication of Ukrainian soldiers. Every year, meetings with veterans are held on memorable days on the memorial’s central square. Today, about 30 million people have visited the exposition.

The path to the Memorial begins from the former gate of the Kyiv Fortress (XVIII century). Here the alley that leads to the museum, starts, and a panorama of the museum town opens. Along the alley you will see 5-meter high bronze high reliefs, 1942 model guns, as well as the Fire of Glory bowl, which is 16 m in diameter. Next to the exposition “On Foreign Wars” there is an exhibition of military equipment in the open area where you can see armored personnel carriers, rocket launchers, weapons of the navy, armored and aviation equipment. The MiG-23 fighter and the Mi-24 helicopter used during the war in Afghanistan, and the Li-2 aircraft, modeled on the American “Douglas” DC-3, are also presented here. It was the plane that delivered the Act of Surrender to Berlin. Everyone can visit the cabins of Li-2, Mi-24 and MiG-23 to feel like a pilot or a participant in air combat.

The Motherland is a world’s famous object that has become a symbol of Ukraine. It is a figure of a woman with a sword and a shield in her hands, mounted on a conical pedestal. At the foot of the sculpture a museum is located. The monument was opened in 1981 and was conceived as a sign of Victory, but the name of “Woman Motherland” stuck as soon as it was erected. Galina Kalchenko served as a model for the image. The steel body was assembled with a 100-meter crane. A casing of the statue was welded from 1.5 mm sheets. Section production took place at a factory in Kyiv with the participation of the Institute of Paton. The total length of the welds is 30 km. A 10-meter copy of the sculpture was tested for stability in the largest turbine of the USSR, located in Moscow. The cost of construction amounted to 2 million rubles.

It was originally planned to erect a 90-meter bronze statue, at the foot of which a waterfall would fall from a 30-meter height. But later another project was developed, according to which the height of the monument was to be 108 m. In the course of work, it was decided that the structure should not rise above the Great Lavra bell tower. And since the bell tower is on a hill, it turns out that Motherland is 12 meters lower. According to Kyiv architects, this was done to maintain the architectural balance between the objects. In style, the sculpture is eclectic and is an example of socialist realism.

The Motherland was repeatedly marked in world rankings. According to experts, the unique structure will stand for more than 150 years. The height of the monument with a pedestal is 102 m (62 m from the pedestal to the top of the sword), its weight is 450 tons. Inside, there are vertical and inclined elevators. You can climb to the “Landscape” (at an altitude of 36.6 m) and “Extreme” (at an altitude of 91 m) observation decks. The observation decks are open for visitors in fine weather; military binoculars for viewing the panorama of the capital are available.

Today, the Memorial complex is a monument of national culture and an integral part of the architectural landscape of Kyiv. This is a world-famous historical heritage site that highlights the events of World War II and the role of the Ukrainian people in the fight against fascism. 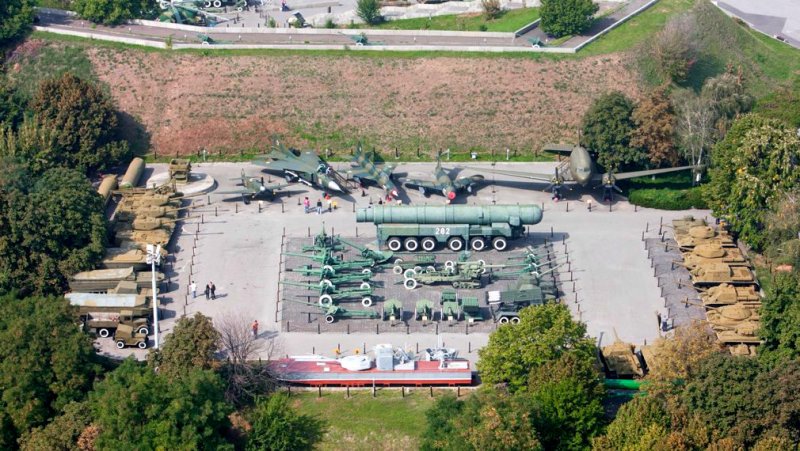 Exhibition of military equipment is an exposition of military equipment and weapons of the 1940s, located on an open area. It totals 65 samples. Here you will see armored vehicles, rocket launchers, mortars, Katyushas and helicopters. Among the exhibits you will also find BMP, BMD and artillery weapons used in military operations of the second half of the twentieth century. Visitors to the exhibition can see the cabins of the Li-2 aircraft, the Mi-24V helicopter, as well as the MiG-23 fighter.

Tragedy and Valor of Afghanistan 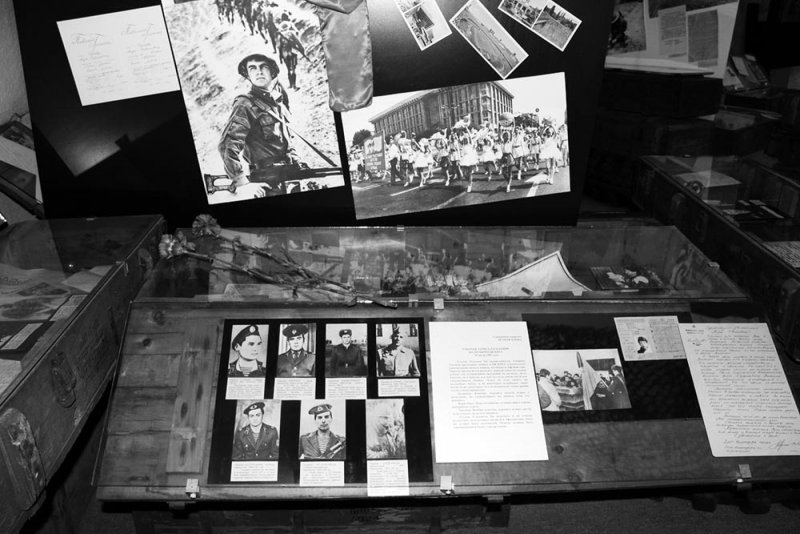 “The Tragedy and Valor of Afghanistan” exposition is dedicated to soldiers, who took part in the military conflict in Afghanistan. Near the building, there is an open exhibition of military equipment during the Afghan war. 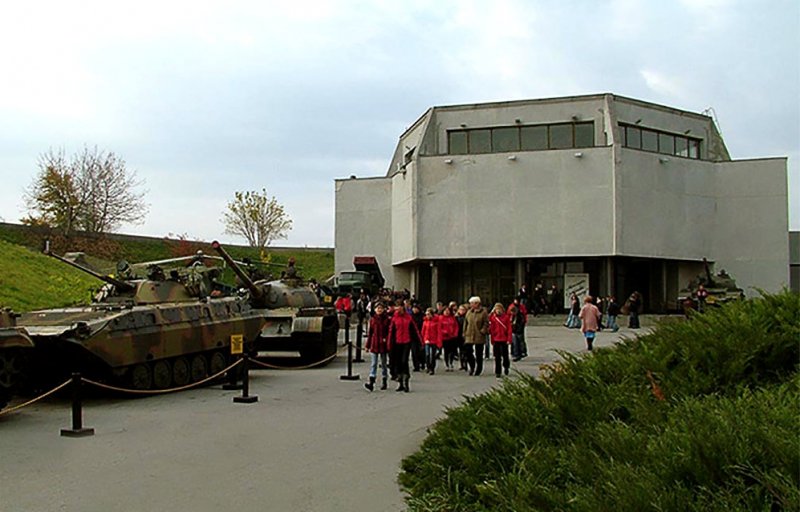 The “On Foreign Wars” exhibition is an exhibition located in a separate room. It has got up to 5 thousand museum items deployed in three rooms. It is dedicated to Ukrainian soldiers and their participation in local wars, as well as in armed conflicts during the former USSR times being in the ranks of the Soviet army. The “The Tragedy and Valor of Afghanistan” exposition is also located here. Near the building, there is an open exhibition of military equipment during the Afghan war. 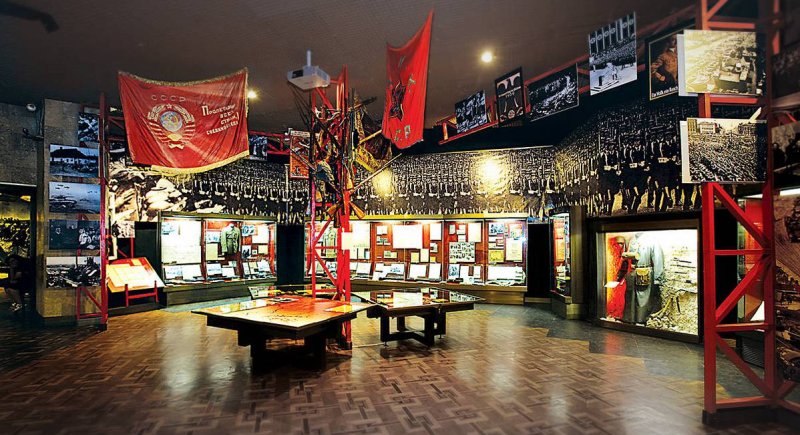 The museum exposition of the Memorial is the main part of the complex, which occupies 16 exhibition halls with an area of 5 square meters. km, where up to 15 thousand memorial items are represented. The main idea is to recall the history of Ukraine during the Second World War and the heroism of the Ukrainian people in victory. 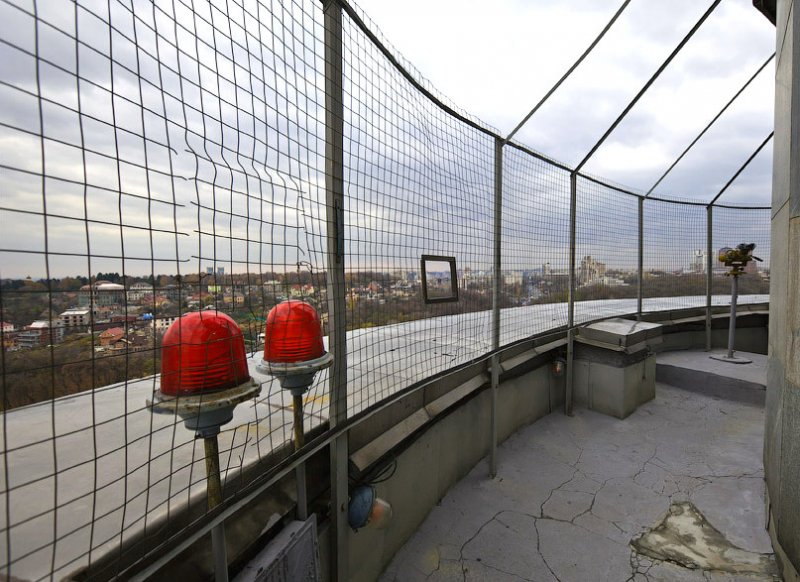 Observation “Landscape” – located at the feet of the statue (height is 36 m). On the view site, everyone can use binoculars and enjoy magnificent views of the Dnieper, Lavra, Pechersk and other part of Kiev. It is possible to lift in good weather by inclined elevator. Children from 7 years old are allowed to the view site. 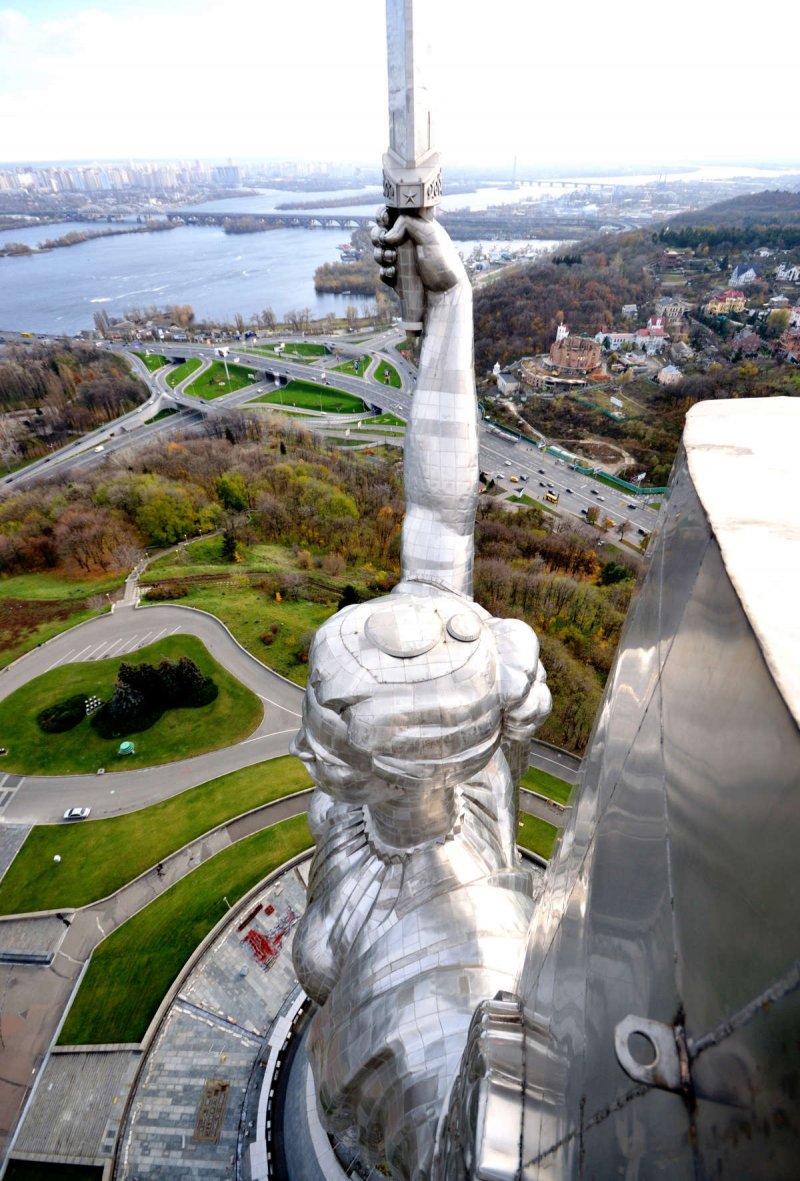 Observation “Extreme” – is located at the height of 91 m (from the back of the shield of the monument “Motherland”), where a panorama of Kiev opens from a bird’s flight. The view site is opened in fine weather. Visiting is possible by appointment (allowed from 18 years old). If there is a problem with the respiratory system or heart, it is advisable to refuse from lifting. You need comfortable sports shoes and clothes for lifting. 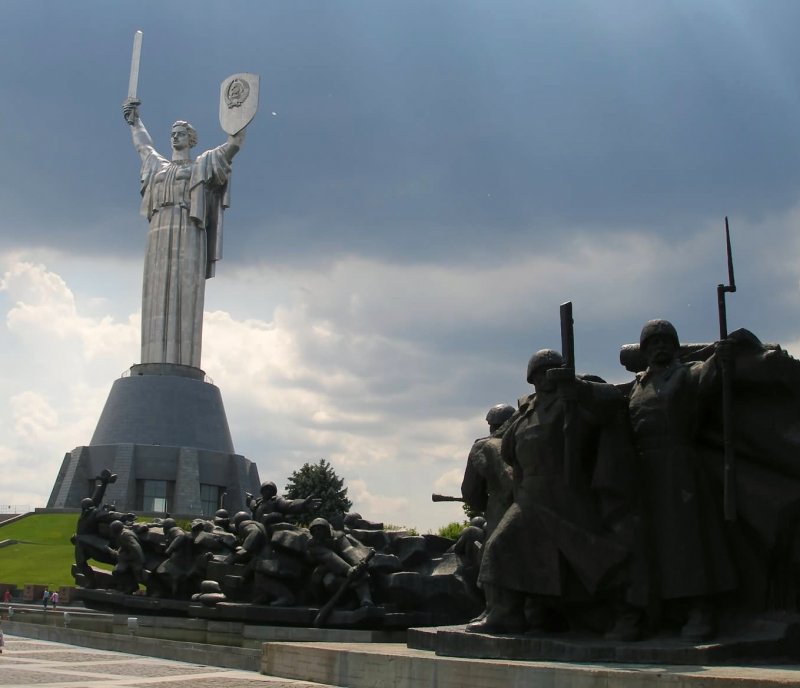 “Transfer of weapons” is a multi-figured sculptural composition (by – V. Vinaikin), where our soldiers are imprinted at the time of transfer of the captured weapons to them. It is located next to the monument of “Forcing the Dnieper.”

Heroes of Front and Home

“Heroes of the Front and the Home Front” is a high relief composition symbolizing the dedication of the front-line soldiers, partisan movement and workers of the home front (sculptors – V. Shvetsov, V. Boroday, etc.). It is a gallery of 5-meter figures leading to the main square of the Memorial. 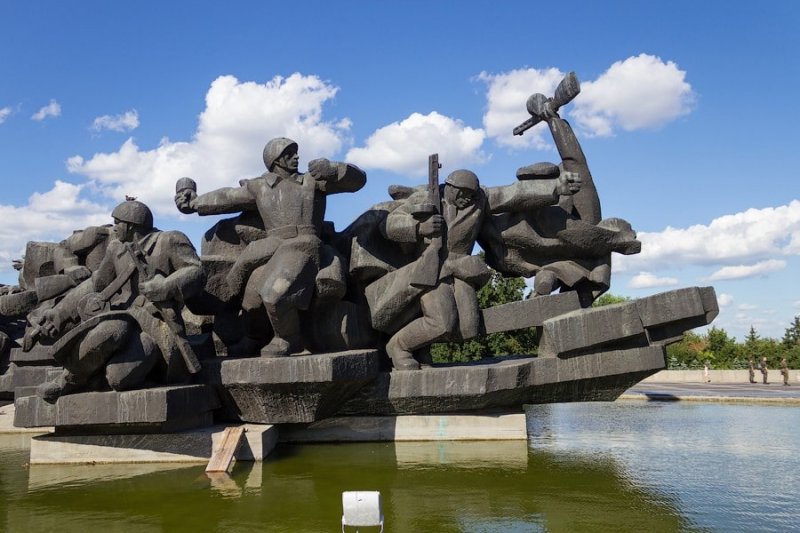 “Forcing the Dnieper” is a sculptural and architectural composition in memory of the ordeal during the war – the battle for the Dnieper (by F. Sogoyan). It represents figures of soldiers mounted on a pedestal. The pedestal itself is located in the fountain, which reproduces the real picture of forcing. 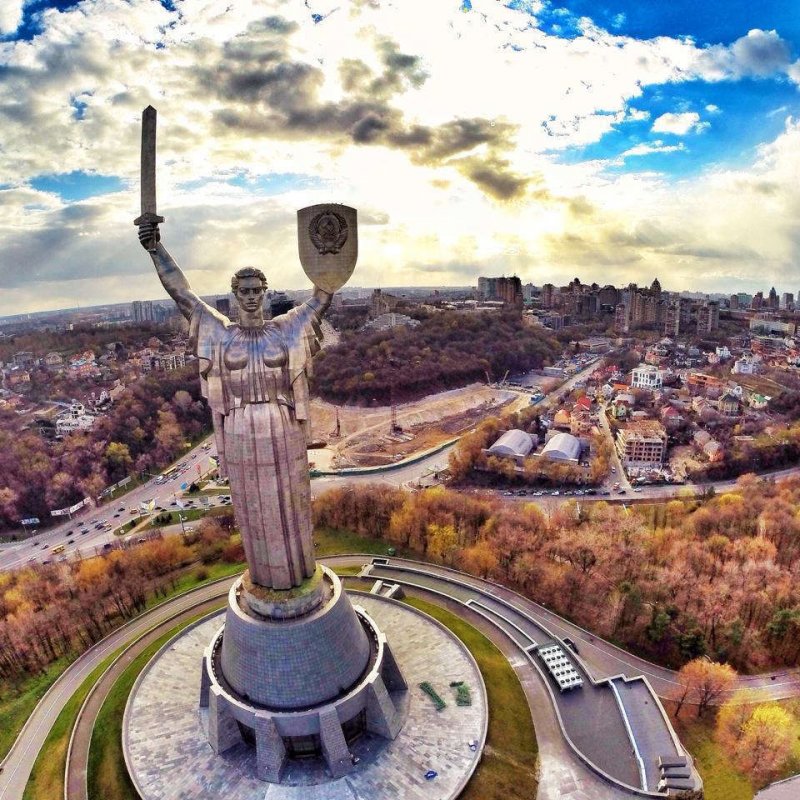 The Motherland is a business card of Ukraine and one of the largest monuments in the world. The total height of the statue is 102 m (62 m from the pedestal to the tip of the sword). This unique structure has been repeatedly marked in various world ratings. The statue has two observation decks at an altitude of 36.6 m and 91 m, operational in fine weather. 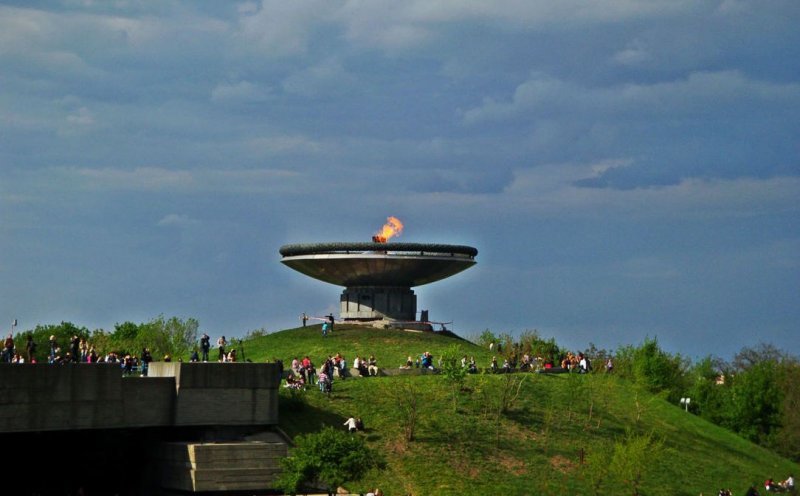 Fire of Glory is a cup with the inscription “Eternal Glory to the Heroes”, mounted on a hill near the main square of the Memorial (its diameter is 16 m). The first fire was lit in 1981. It is annually lit in the days of remembrance. 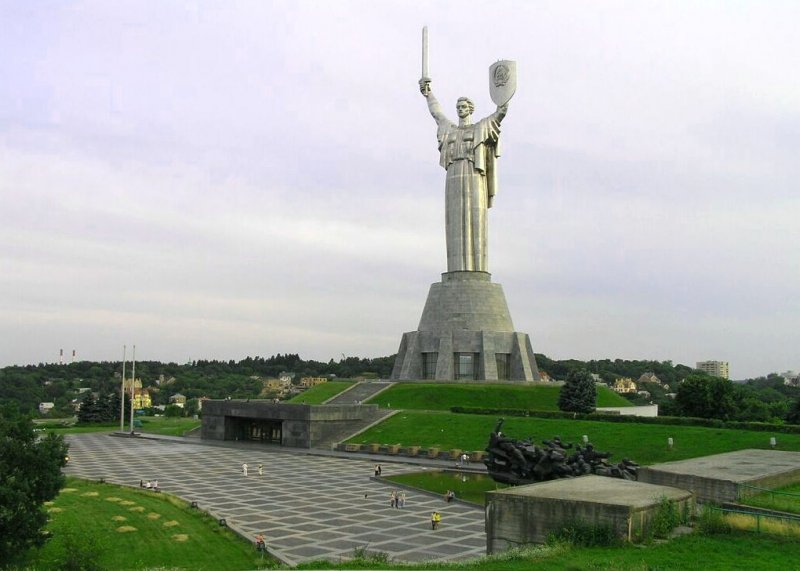 The main square is divided in front of the main entrance to the museum and seats up to 30 thousand people. Two tanks with cross-guns were installed on the square, conveying the meaning: “No war!” Every year on memorable days, mass events take place here. 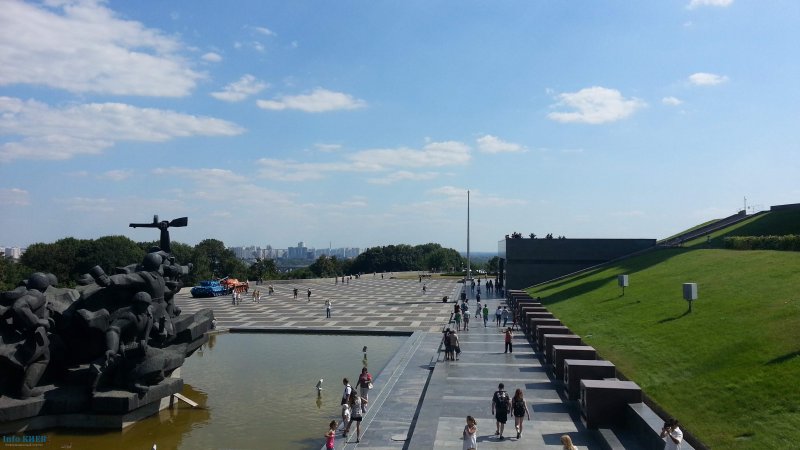 Alley of hero-cities is located at the foot of the Motherland. It is a granite slab with the names of hero cities. On May 9, 1981 capsules with sacred earth from the battlefield were placed in the slabs.