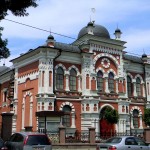 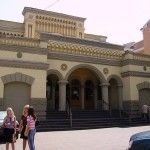 – The Rosenberg Synagogue. The construction of its building was funded in 1899 by the merchant Gabriel-Yakov Rosenberg and is located on the Shchekavytska Street, 29. With the advent of Soviet power, the synagogue was closed at one time, but after the World War II the synagogue was restored. Before the proclamation of Ukraine’s independence, it was the only functioning Jewish prayer house in Kyiv. Today it is the synagogue of the Kyiv Jewish community.

– The Brodsky Synagogue – was built in 1898 with the donations of the Kyiv millionaire Lazar Brodsky (he also built the Bessarabian market, the Kyiv Polytechnic Institute, the Paton Institute and the operetta theater). In 1926, the building was transferred to the club for a trade union of handicraftsmen. Since 1955, a children’s puppet theater was located there, in 1997 the building was transferred to the Jewish community of Kyiv.

Since the Jews were not allowed to build religious buildings in the central part of Kyiv, the draft of the synagogue was rejected by the provincial authorities. It was allowed to accommodate living and household premises for ritual purposes. Then Brodsky and Kyiv rabbi Evsei Zukkerman decided to play smart by sending a complaint and a drawing of the side facade of the synagogue, from where the building looked like a household premise to St. Petersburg. And the Senate gave its permission.

The building was built in a year, construction was carried out by Lev Ginzburg’s best construction company in the city. There is a museum in the hall of the synagogue where one can see the work of the Israeli sculptor Frank Meisler, the fragment of the Torah scroll of the 2nd-5th c., a copy of the key from the opening of the synagogue in 1898, ancient books, bales, tefillins, mezuzah, candlesticks.

– The Halytska synagogue – built in the Romanesque style in the period of 1909-1910 on the initiative and funds of the Galician Jewish Prayer Society, is located on the Zhylyanska Str., 97. In the two-storeyed building there was a prayer hall and a gallery for women. In the 1920’s the synagogue was called “Beis-Yaakov” and counted up to 750 parishioners. In 1930, the synagogue was closed, and the building was handed over to the “Transsignal” factory for a workers’ dining room.

Only in 2001 the building had been returned to the Jewish community, after which the Jewish divine services were resumed. Today in the Halytska synagogue there is the international Jewish community “Midrash Tsionit” – a young community belonging to the national-religious trend in Judaism. Every day minyan gather here, Saturday and festive services are held, adults and children gather for community meals and lessons.