Government buildings in Lypky of Kiev 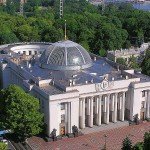 The Verkhovna Rada of Ukraine 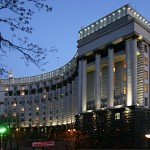 The Cabinet of Ministers of Ukraine 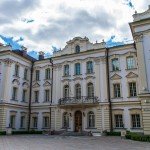 The Supreme Court of Ukraine 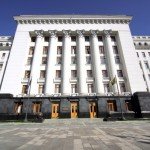 The Presidential Administration of Ukraine 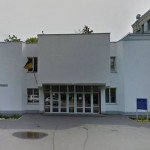 The Ministry of Internal Affairs of Ukraine

– The Verkhovna Rada of Ukraine – a parliamentary house for meetings, built in 1939 on the project of architect V.Zabolotny, who in 1940 was awarded the Stalin Prize for his project and then was appointed the chief architect of Kyiv. The building is a model of Ukrainian architectural classics. So, after the transfer of the capital from Kharkiv to Kyiv since July 1939 on the Hrushevsky Street, 5 began to take place the Ukrainian parliament sessions in the new building. In the mid-1980s before the entrance to the building appeared sculptures, symbolizing different layers of the population – workers, peasants, scientists, intellectuals. It is worth noting the rich interior of the building, made by authors’ projects, including even door handles, chandeliers and furniture. Nowadays here are conducted the sessions of the parliament.

– The Cabinet of Ministers of Ukraine – a government building located on the Hrushevsky Street, 12/2. The construction was erected in the period of1936-1938 and is a striking example of Soviet constructivism – the facade in the form of a semicircle with tall columns, the lower floors faced with large stone blocks. At one time there were the NKVD and the Council of Ministers of the Ukrainian SSR. Since the day of the independence of Ukraine – the Cabinet of Ministers. Today it is the largest administrative institution (235 thousand square meters). It is an architectural monument. Excursions are organized in the Government House by appointment. The Museum of the History of Ukrainian Governments also operates, where the originals of documents of former leaders are presented, their awards and photographs, the cabinet of the Chairman of the Council of Ministers of the USSR is recreated. The exhibition of gifts received as a gift to the state is constantly replenished.

– The Supreme Court of Ukraine – the highest judicial body located on the P. Orlyk, 4A in the Klovsky Palace. The mansion, built in 1756 in the style of the Ukrainian Baroque, is an architectural monument. Initially, the palace was intended for the reception of members of the royal family, but it was never used for its intended purpose. In the 1760’s was laid out a decorative park near the manor. During the existence of the palace there was the Lavra printing house, a military hospital, the first male gymnasium, and until 1917 – a women’s religious school. During the Civil War the building was destroyed and restored in 1930. Since 1982, the Kyiv History Museum was opened here, and since 2003 – the seat of the Supreme Court of Ukraine. At the institution works the museum, where you can see the mantles and breastplates of judges of different eras. You can get on excursion by appointment.

– The Presidential Administration of Ukraine – the main governmental body located on the Bankova Street, 11. The building built in the style of Soviet classicism. It is an architectural monument. The institution was built in the 1930s on the project of the architect S. Hryhoriev by means of the reconstruction of two buildings of the XIX century and was intended for the headquarters of the Kyiv Military District. After World War II, the building housed the Central Committee of the Communist Party of Ukraine. It was here that Khrushchev, Podgorny and Shcherbitsky worked in their time. Since 1992 here housed the administration and residence of the President of Ukraine. The building is striking in its greatness and monumentality, and the entrance with the columns emphasizes the importance and significance in the formation of history.

– The Ministry of Internal Affairs of Ukraine – a state executive body, located also at Lypky, on the Academician Bogomolets Street, 10. Next to the building of the Ministry of Internal Affairs in 2009 a sculpture was set up, dedicated to the employees of the Ukrainian criminal investigation. It represents the figures of famous heroes of the film “The place of meeting can not be changed” – Gleb Zheglov and Vladimir Sharapov. If you pass on the Bogomolets Street to the intersection with the Shovkovychna Street , then you will see the memorial park named after Academician Bogomolets – is a botanical monument of the nature of local significance. At the Academy of the Ministry of Internal Affairs of Ukraine operates a museum, which is located (Solomynska Square, 1). In the museum of 12 rooms there are more than 30 thousand exhibits, in particular, a collection of police officers’ uniforms, since the 1920s, as well as a collection of cold and firearms. You can get to the museum by appointment.