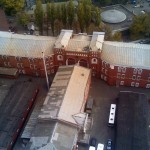 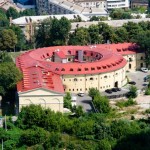 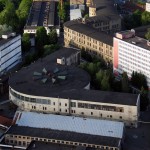 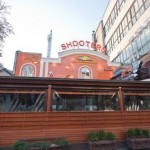 Barracks of the gendarmerie regiment 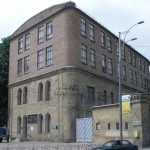 – Lower supporting wall – is a semicircular structure, part of the fortification of the New Pechersk Fortress (Parkova Road, 4). It is a two-level vaulted gallery with gun loopholes. It was erected in 1856 to strengthen the fortifications around the fortress, cover the ravine and water pumping station, which was located on the banks of the Dnipro. The main goal of the lower supporting wall is to close the approaches to the Nikolayev chain bridge (not preserved) and to keep the defence of the Podolsky embankment. From the water pump through the supporting walls passed an underground passage, connecting with the workshops of the “Arsenal”. Inside were laid iron pipes (partially preserved), along which the water pump supplied water to “Arsenal”. The tunnel itself was called the “Rattler’s move.” The lower supporting wall is preserved, but is in ruined condition.

– Upper supporting wall – is part of the fortification of the New Pechersk Fortress , a semi-circular brick structure built in 1854 to strengthen the Dnipro slope. It is a two-tier vaulted gallery with rectangular side wings and reinforced rear buttresses. The upper supporting wall had the appearance of a defensive construction of the feudal era, but did not bear military significance. Through the lower and upper supporting walls, from the Dnipro River located on the bank of the Dnipro, there was an underground passage connecting the workshops of the “Arsenal” plant and the water pump. In 1949 at the base of the wall was built the Green Theatre for 4 thousand seats. Today the theatre is in an abandoned state. Sometimes there are night discos and performances of youth musical groups. Most of this place was loved by people of informal and alternative movements because of the legends about ghosts and mystical cases.

– Nicholas (Nikolsky) Gate – a monument of fortification architecture, erected in 1846-1850 and were the main entrance to the Kyiv fortress (Ivan Mazepa Str., 1). Nikolsky Gate with barracks are also known as “barracks on the isthmus”, because were built on the site of a natural isthmus. The construction in the form of a stretched letter “M”, with loopholes and towers with crenellations, amazes with its unusual configuration and romantic forms. The gate as a whole with the defensive barracks stood in a chain of fortifications, located around the Pechersk Upland on the isthmus, connecting Pechersk with the palace part. A brick wall with loopholes was connected to the workshops of the “Arsenal” plant (a fragment of the wall was preserved). The building of the barracks with Nikolsky gate was divided into vaulted compartments-casemates with embrasures facing the external facade. In 1852 the front facade of the gate was decorated with lion masks and ornaments (preserved from the moat side). After the abolition of the fortress, the gates were dismantled. It is known that in the early XX century soldiers of the pontoon battalions were stationed in the Nikolsky barracks. Later, on the site of the buried part of the moat and pulled down the defensive wall, starting from the gate, through the fortifications was paved the street. In the 1930s the thoroughfare of the Nikolsky Gate was laid. Today, the remains of the building partially covers the building of the metro station “Arsenalna”, and from the Mariinsky Park it is closed by dwelling houses.

– Tower №5 – built in the middle of the XIX century on the highest point of the city – on the Klovska Hora as an object of the New Pechersk fortress. Tower №5 was a part of the complex of defensive structures in Kyiv to protect the northern slope of the Pechersky Upland and created a serf front from the Klovsky Yar. The tower was combined with other structures with the help of ramparts and defensive brick walls. The Pechersk fortress had no analogues in Europe and was a mighty fortification, although throughout its history the fortress was involved in no one war. In 1897 in the tower placed warehouses and a garrison prison, loopholes were blocked up, and instead of them, window slots appeared. During the Soviet era, the Ministry of Defense used the fortress as a military warehouse, nowadays here house different offices.

– Tower № 6 – it was built in 1846-1851 and was part of a chain of casemate-type buildings stretching along the northern slope of the Pecherska Upland (Moskovska Str.). The tower was connected by a brick defensive wall with the barracks and production workshops of the “Arsenal” plant. It was a circular brick structure with two rectangular wings and an inner courtyard with an arched passage, inside it was divided into arched sections-casemates. In the lower tier there were gun loopholes, in the upper one there was a cannon embrasure flanked by loopholes. In the casemates were ventilated air vents. Initially, the tower was intended to house a gendarmerie regiment. Since 1854 it was used to house employees of the Kyiv artillery arsenal. In 1967-1969 was completed the third floor, in 1976-1978 the courtyard is built, the facade is tiled.

– Barracks of the gendarmerie regiment – were built in 1844-1847 and were included in the “Arsenal” fortification of the New Pechersk Fortress ( Moskovska Str.,22). They are built between the towers №5 and №6, connecting with them by fortress wall (not preserved), and used to accommodate military units. In the barracks there were 87 casemates and premises for the lower ranks and chief officers of the gendarmerie regiment with kitchens and storerooms. Also there were stables, a horse hospital and an arena (not preserved). The building is a brick arc-shaped two-storeyed building with two semi-towers, cut through slit-shaped loopholes (in the 1960s the floor was built up), with branched underground communications for the needs of the fortress and for the water supply. Since 1859, engineering units have been stationed in the barracks. Later there were various educational institutions, and in Soviet times the premises were used for production. Preserved to the present day. Today, here is the club “Shooters”.

– Manufacturing workshops – built in 1850-1854 in connection with the expansion of the plant “Arsenal” – the oldest weapons plant in Kyiv. Workshops “Arsenal” were part of the fortress between the tower №6 and Nikolsky barracks at the Arsenal Square. In 1961, two floors have been completed, without reference to the historical part of the building. A fragment of the wall, riddled with bullets during the Bolshevik uprising in 1918 (the Moskovska Str., 2), preserved to the present day.