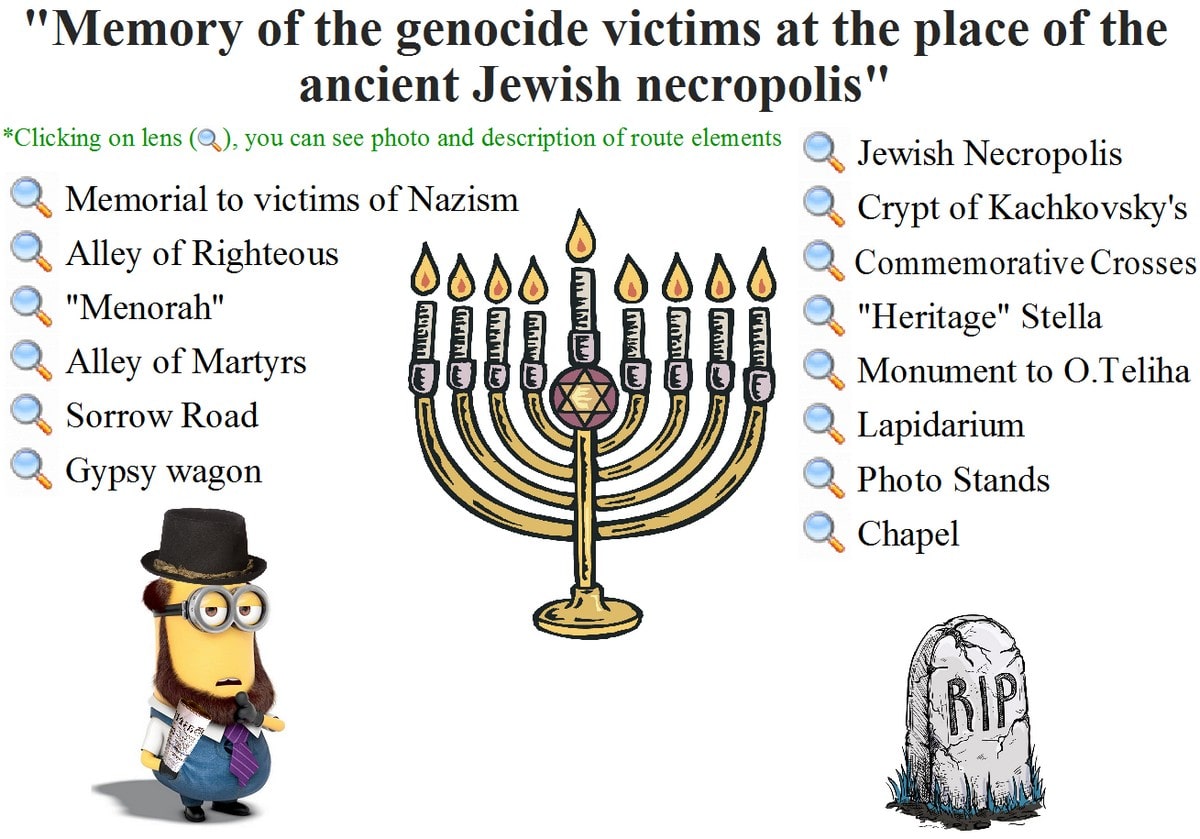 We invite everyone to our excursion around the “Babyi Yar” reserve. During the tour you will learn about the terrain, the old Jewish necropolis, as well as tragic events that took place here. You will see memorial boards to the victims of Babyi Yar, lapidary and stands with photographs. In addition, you can visit the historical and memorial reserve “Lukianivske Cemetery” or the St. Cyril Church, founded in the XII century. Duration – 2-3 hours.

MAP OF THE MEMORIAL “BABYI YAR” 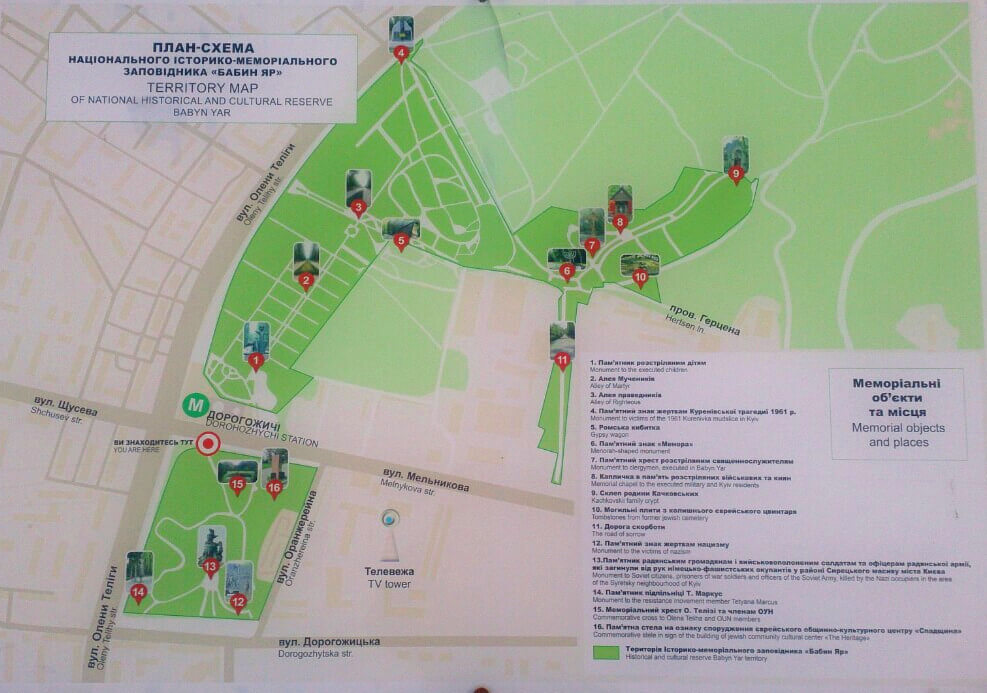 The National Historical and Memorial Reserve Babyi Yar is a memorial complex opened at the world famous place of mass executions of civilians who suffered Nazi genocide during the Second World War. During the fascist occupation of Kyiv, more than 100 thousand people were shot here. Among them there were mainly Jews, as well as gypsy, mentally ill and prisoners of war. Today Babyi Yar is a memorial dedicated to those tragic events. Every year thousands of people from different countries come here to honor the dead.

In the 1950s, it was decided to whelm Babyi Yar and to set up a park in its place. The territory was jammed with dams and silted with pulp from the Petrovsky brick factory. In the spring of 1961, the pulp broke through the dam and flooded a significant part of the Kurenivka region, taking lives of hundreds of Kyiv citizens. After the tragedy, the slopes of the area were re-designed, trees were planted, highways were laid, and a park with alleys was laid out in a ravine.

For a long time, Soviet power was silent about the scale of the Babyi Yar tragedy. And only after the rally on the occasion of the 25th anniversary, which was held in 1966 with the participation of Kyiv activists, they started talking about this publicly. Among the activists, there also was a dissident writer Viktor Nekrasov, who criticized the local authorities for indifference to the memory of the executed Kyiv citizens. Subsequently, Nekrasov was expelled from the country.

Only in 1976 the first monument commemorating the victims was established, and slabs with the following inscription placed: “Here, in 1941–43, German fascist invaders shot more than 100 thousand citizens of Kyiv and prisoners of war”. An opening of the monument was met with harsh criticism, since it did not convey the tragedy of the Jewish people. For a long time, the monument remained the only monumental embodiment of the tragedy in Babyi Yar.

To tell generations of the history of the mass destruction of the citizens of Kyiv and prisoners of war by the Nazis, to honor the memory of the victims of Nazi terror and the Holocaust, in 1999, it was decided to develop the area of Babyi Yar and to create a memorial. Since 2007, Babyi Yar has been a historical and memorial reserve.

Today, the memorial complex includes:
– the Alley of the Righteous,
– the Alley of Martyrs,
– Menorah,
– Road of sorrow,
– Chapel,
– Monument to the shot children,
– Memorial to the victims of the Kurenivska tragedy of 1961,
– Gypsy wagon in memory of the executed gypsies,
– Cross to the executed clergy,
– Crypt of the Kachkovsky family,
– Gravestones from a former Jewish necropolis,
– Memorial to the victims of Nazism,
– Monument to Soviet citizens and the Soviet Army prisoners of war, who were murdered by Nazi occupiers,
– Monument to the spy T. Marcus,
– Memorial cross to the executed poet O. Teliga and members of the OUN,
– Commemorative stella in honor of the construction of the “Heritage”Jewish community cultural center,
– Monument to O. Teliha and her comrades-in-arms who died for the independence of Ukraine,
– Memorial sign of the executed Kievites of Jewish nationality,
– Lapidarium from the grave monuments of the former Lukyanivsky Jewish cemetery found in Repyakhov Yar,
– Stands with photos and descriptions of events that took place in Babyi Yar,
– Commemorative Crosses, etc.

It is planned to open a Museum in memory of the victims of Babyi Yar in the building of the former office of the Jewish cemetery. In addition, the project plans to erect the Wall of Remembrance along with the Eternal Flame, to open the Holocaust Museum, as well as the Peace Square, where a church, a synagogue, a church and a mosque will be built. 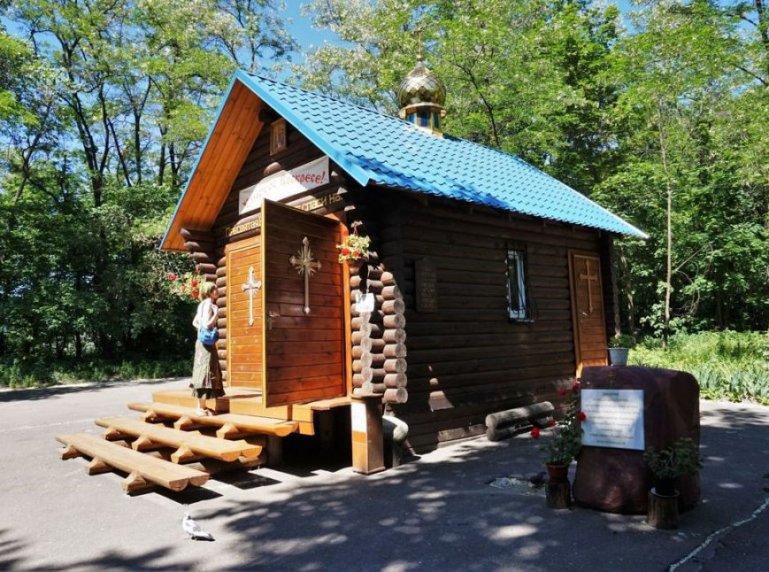 The Chapel was built in 2012 on the site of the execution of Orthodox priests by fascist invaders during the Second World War. It’s operational, services are held too. 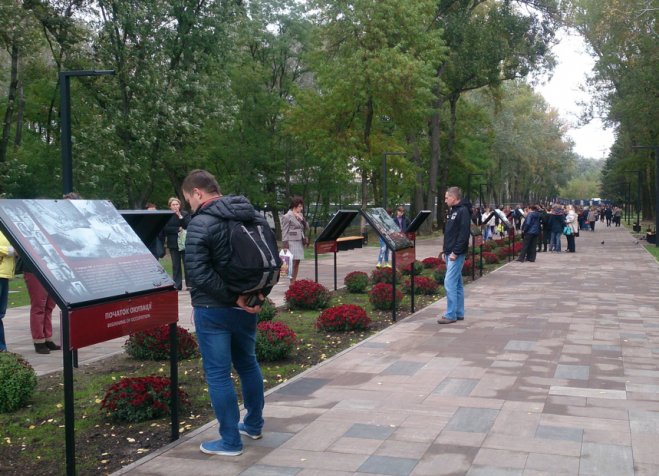 Photo stands are commemorative stands with photographs and descriptions of the tragedies that took place in Babyi Yar during the Second World War, as well as the events of the Kureniv catastrophe (1961), etc. 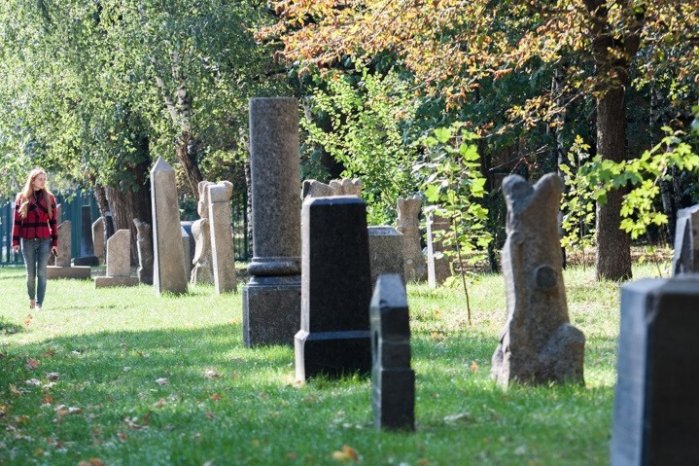 Lapidarium is an alley of the grave monuments of the former Lukyanivsky Jewish cemetery, found in Repyakhiv Yar. Tombstones were installed along the Road of Sorrow (opposite the Pencil television center). 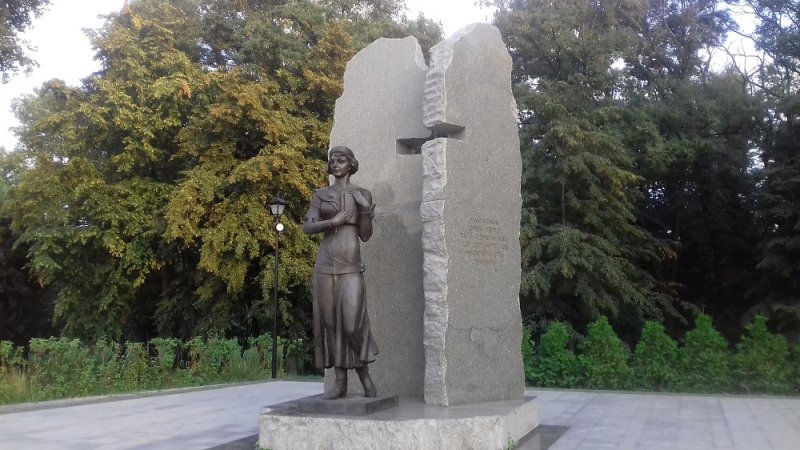 The Monument to O. Teliha is a monument erected in 2017 in memory of the Ukrainian poetess O. Teliha and her comrades-in-arms, who were shot by fascists in Babyi Yar during the German occupation of Kyiv. It is located at the intersection of O. Teliha and Yu. Ilyenko streets (metro station Dorohozhychi). 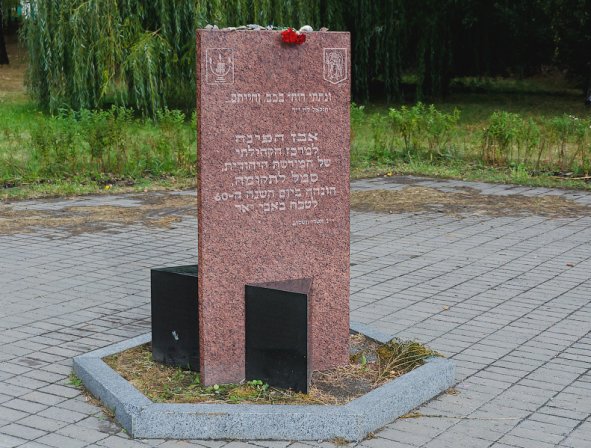 The “Heritage” stella is a memorial sign erected in 2001 to commemorate the planned construction of the Jewish community and cultural center of “Heritage” on this site. The center has not yet been built. 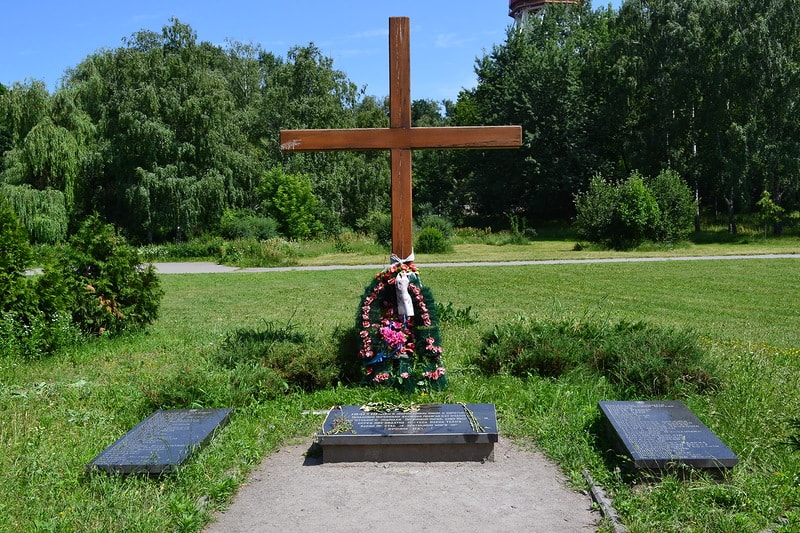 Commemorative crosses were installed throughout the territory of the Babyi Yar memorial reserve. Among them is a cross in memory of the executed poetess O. Teliga and members of the OUN, a cross for executed clergy, etc. 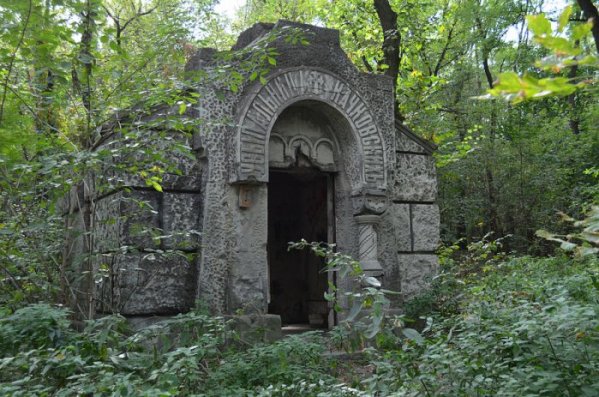 The Kachkovsky crypt is the only tomb preserved in Babyi Yar (in a dilapidated state). It is known that professor of Kyiv University P. Kachkovsky is buried here. Earlier the Kirillovske cemetery was here. 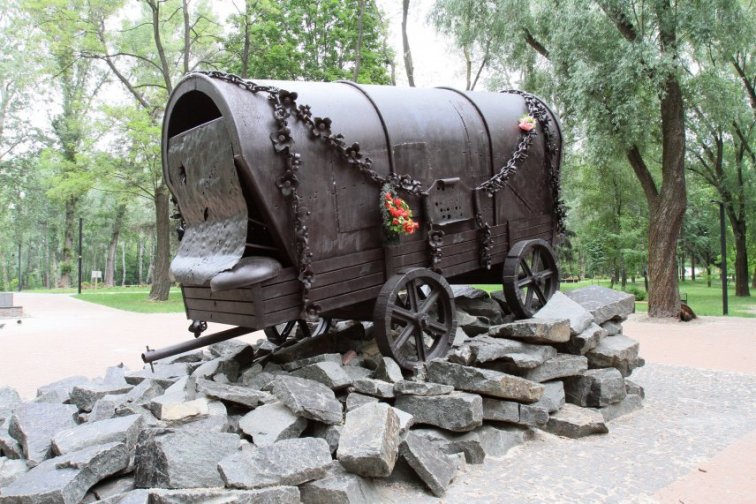 “Gypsy wagon” was established in 2016 in memory of the executed gypsy in Babyi Yar in 1940-1945. It is a wagon shot through by bullets, entwined with a wrought-iron garland of flowers, and erected on stones. 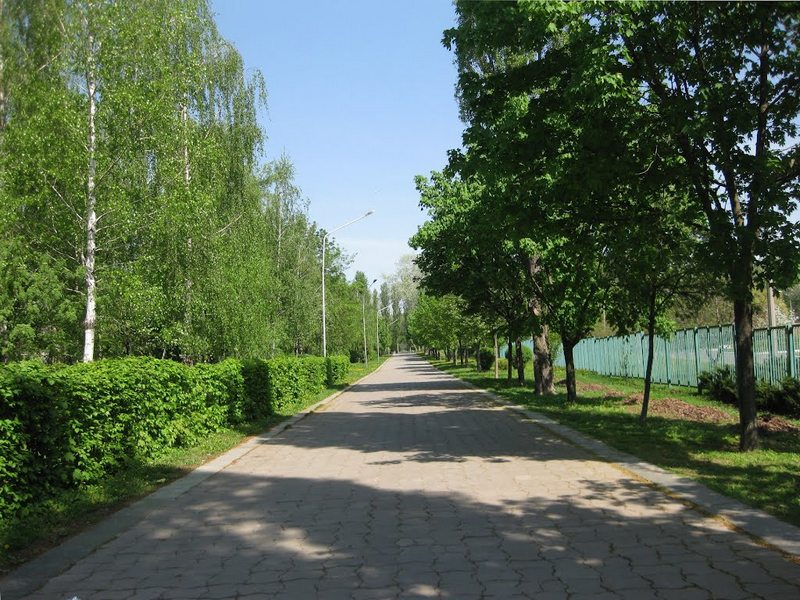 The road of sorrow is an alley leading to the Menorah monument (from the street of Yu. Ilyenko). It symbolizes the path that the victims of the tragedy walked to the place of execution. 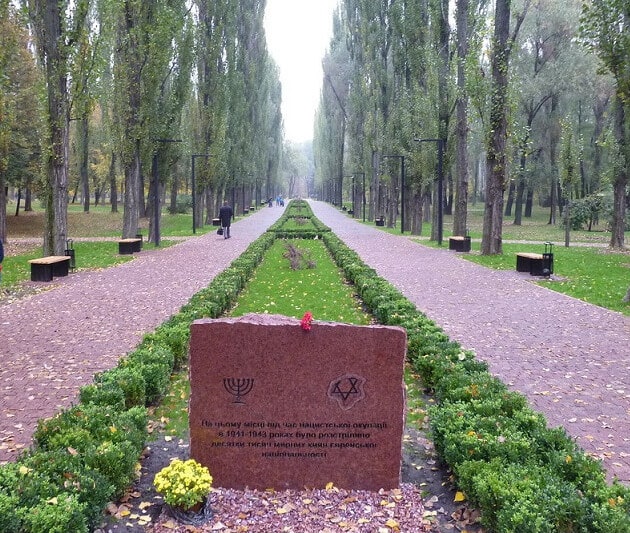 Alley of the Martyrs is an alley on the territory of the memorial, laid out with paving stones (metro station Dorohozhychi). It symbolizes the scale of the tragedy that occurred in Babyi Yar in 1941. 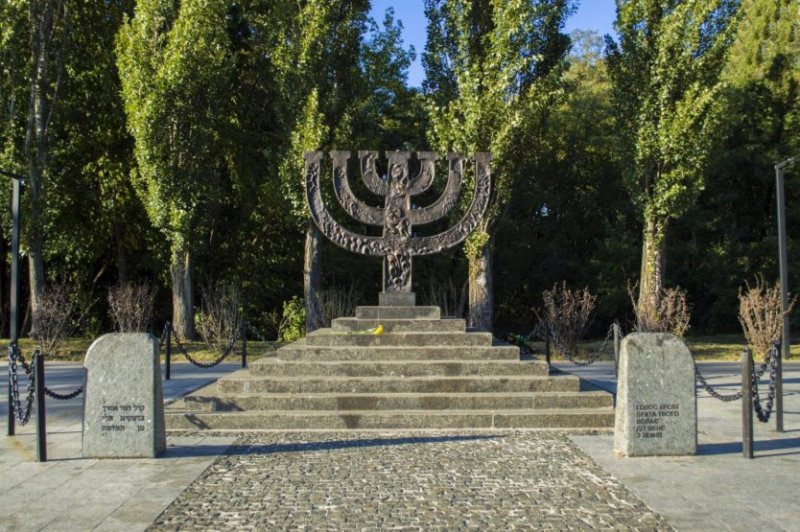 Menorah is a monument erected in 1991 on the anniversary of the tragedy. It is dedicated to executed Jews during the occupation of Kyiv by the Nazis. It is a bronze menorah depicting a biblical scene – the sacrifice of Abraham. 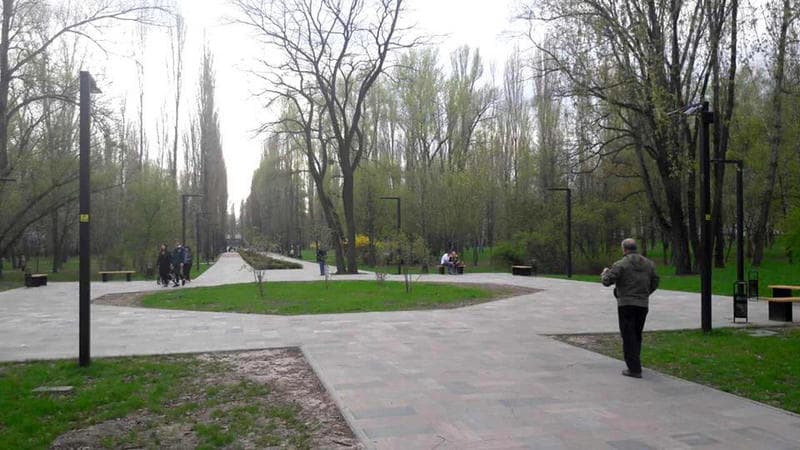 Alley of the Righteous is an alley on the territory of the memorial (from the side of Y. Ilyenko str.). it is dedicated to those who during the period of German occupation saved Jews from death. The honorary title of the righteous was established in 1989. The first to be awarded this title were members of the Kyiv priest’s family.

Memorial to victims of Nazism 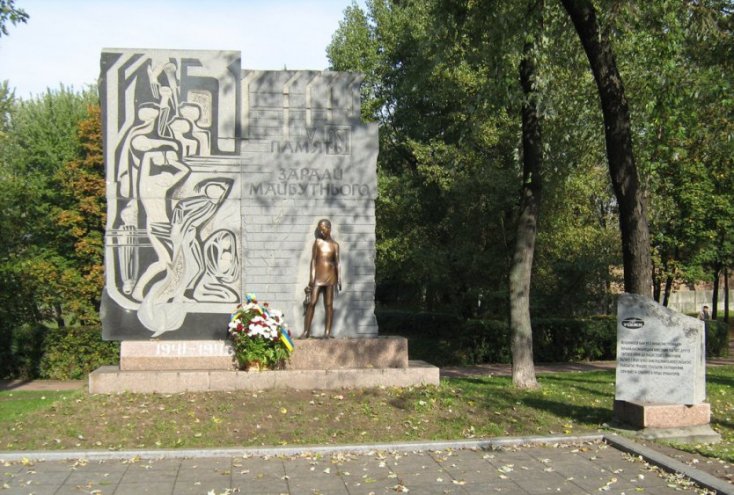 Monument to the Victims of Nazism installed in 2005, is dedicated to Ukrainian ostarbeiters who were forcibly taken by the Nazis to concentration camps in Germany during the Second World War. It features a granite slab with a bronze figure of a girl holding a toy in her hands. A stone is installed next to the monument with the sign of the organization of the Ukrainian association of prisoners-victims of Nazism. 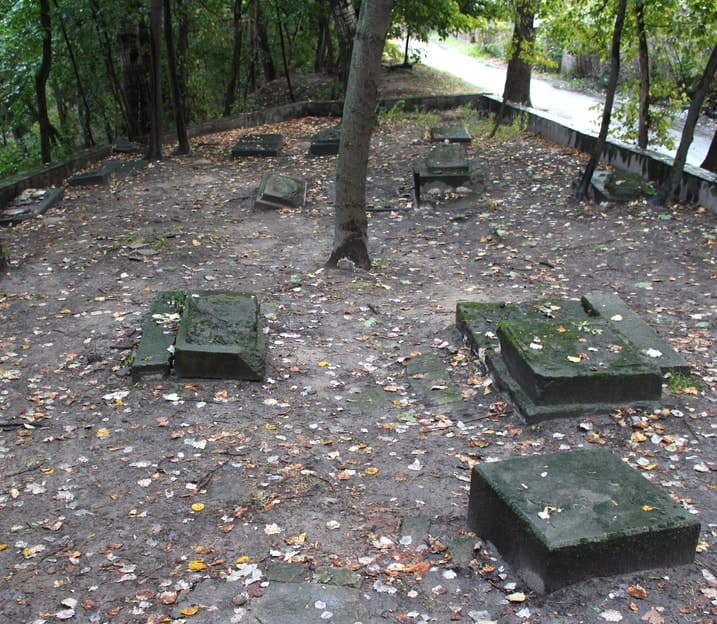 The oldest Jewish necropolis – opened in 1893 on the outskirts of the city in the tract Repyakhovy Yar, where there were Jewish burials, and next to it was the Karaim necropolis. Here were buried: the leader of the Kiev Zionists – Dr. Mandelstamm; the chief rabbi of Kiev – Weisblat. The family vault of Brodsky’s (sugar mill) was here. In 1937, the necropolis was closed. During the occupation of Kiev by Nazi troops, many graves were destroyed. In the late 1950s part of the graves was transferred to the Berkovets cemetery. In the early 1960s the necropolis was completely destroyed. Today, the territory of the Jewish necropolis belongs to the national park “Babyi Yar”. Thanks to activists, the Lapidarium was recently opened here. It consists of gravestones of the former Lukyanovsky Jewish cemetery, found in Repyakhov Yar.