Here are the shoe covers, would you like to see night flowers?”

Join us in the underground world of Kyiv! With shoe covers on and flashlights, you will embark on a fascinating journey through the tunnels of the capital, descending to the depths through the city hatch! To visit an excursion of this format, you must have a waterproof jacket or a raincoat, comfortable shoes and gloves. Dress code includes something simple to get dirty and a blazer. Guided tours are held by appointment. The price includes: guide services, shoe covers and flashlights rental. Duration – 2 hours. Inside the temperature: +15 +16 С.
📞+380964425437 (Viber, WhatsApp, Telegram) 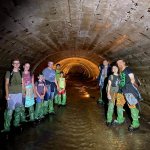 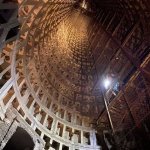 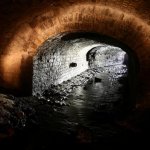 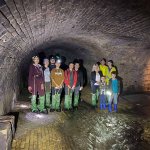 Khreshchatyk, Klov river. It flows under the main street of Kyiv, Maidan and European square. The arched hand-laid highway has sections of 200 years old red brick, where prints with the royal coats of arms and years of construction have survived. So, in the 1830s they began to build up Khreshchatyk, and the river was “chained” into a sewer. During the excursion, you will see how the river looks today, as well as the foundation of the Bessarabian market and an underground waterfall. The route is easy, no additional physical efforts required.

Mykilska drainage tunnel system. It is one of the most colorful dungeons in Kyiv. Construction of the tunnel began in the 1840s in order to drain underground water and prevent landslides on the road leading from the city center to the Chain Bridge. Here engineering solutions were used that have no analogues in the countries of Old Europe. Visiting the tunnel, you will feel the whole atmosphere of the underworld and see a gallery with a 3-meter wall, as well as a century-old well with spring water. The difficulty level of the route is medium, be prepared for narrow / low sections of the passage.

Askold’s cave. Askold’s drainage system was built in the 1850s at the place where, according to legend, the Kyiv prince Askold was killed. The route runs from the Green Theater to the Dnieper Start. If you fancy active routes, want to experience a slight extreme, then this excursion is just for you. You will get to the depth of a 33-meter underground mine, walk through narrow wells and galleries. During our trip, you will find out why this drainage tunnel system is considered the longest, and you will also see a corridor of karst rocks and “royal corridors”. Be prepared for narrow / low passages or crawling in some areas.

Lukyanivka Station, Skomorokh stream. The tributary of the Lybid River is one of the most amazing places in underground Kyiv. It originates in the Lukyanivka area. Its length is 3 km. Once upon a time instead of st. Biloruska, there was a stream, to which vegetable gardens descended from the estates of neighboring streets. In 1908, after a cholera epidemic in Kyiv, ditches, incl. Skomorokh, were proposed to build into brick and concrete structures. Thus stream was “chained” in 1914, but its narrow valley is clearly visible in the modern relief. During the tour, you will learn how Skomorokh helped the workers of the motorcycle factory and how local diggers got to the American embassy. The route is easy, no additional physical efforts required.

Podil, Glubochytsia river. It is one of the few dungeons in Kyiv, which has almost completely retained its authenticity. The 2 km route will run at a depth of 4 m (!) You will see the stone walls of a three-level dungeon and find out where the first river gates of Kyiv were and why the first sidewalks appeared here; what underground corridors the prisoners used to escape and what happened to the sewer during the Second world war. The route is of medium difficulty, tailored for those who are not afraid of darkness and confined space. The height of the ceilings in some places reaches 1-3 m.