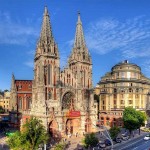 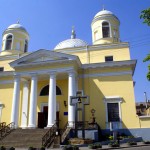 The Alexander church (the church of St. Alexander) 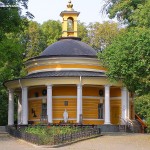 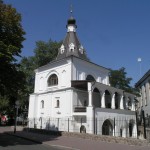 Church of St. Nicholas the Good

– St. Nicholas Roman Catholic Kiev Cathedral – is a Roman Catholic cathedral built in 1909 to commemorate the Emperor St. Nicholas’ II visit to Kyiv. Construction of a foundation for concrete piles was proposed for the first time and reinforced concrete was widely used in the construction. In the 1930s it was closed and looted, and the clergy was repressed. Warehouses of goods were located in the building. The cathedral suffered greatly from artillery shelling and fire in 1943. Since 1980 the cathedral began to operate as a concert hall of the House of Organ and Chamber Music. The cathedral is unique for its acoustics and organ (it has up to 4 thousand pipes) and was custom made.

By the end of the XIX century the number of parishioners was more than 33 thousand people (the total number of residents in Kiev – 188 488 people). In 1879, the future artist Kazimir Malevich was baptized in the church. With the coming of Soviet power in the temple was a storage room, later – a dormitory, since 1952 – a planetarium. In the 1990’s. The Alexander church was again opened to the parishioners. The main relic of the temple is the crucifix brought from Italy and a copy of Raphael’s Madonna.

In addition to the church service, organ music concerts are held in the church. In 2001, a small German organ was installed in the Aleksander church, which was handed over by the community of the German city of Herzogenaurach. In 2001 the Pope John Paul II visited the church. Today it is the main Catholic temple in Kyiv.

– Church of St. Nicholas on Askold grave – Greek Catholic Church, located on Askold grave at Pechersk. It was built in 1809 on the site of the formerly Desert-Nicholas Monastery (XV century). In 1893, the church was renovated, after which a white marble iconostasus brought from Italy appeared. In 1901 a bell tower was erected. With the advent of Soviet power, the church was closed, the building was rebuilt as a restaurant, and the bell tower and the abbot’s house were demolished.

Only in 1997-1998 the original form of the structure was renewed. Today the church belongs to the Ukrainian Greek Catholic Church. This is the first temple, which was visited by Pope John Paul II in 2001 during his visit to Ukraine. The grave of Askold is in the basement under the church, where there is an ancient stone sarcophagus.

– Church of St. Nicholas the Good – a church built in 1800-1807 as an Orthodox church, is located at Podil. Originally, before the erection of the stone church on this site stood a wooden church, built in the XVI century by Zaporozhian hetman Samil Kishko. It was in this church in 1913 that the famous writer Mykhailo Bulgakov was married with his first wife. The temple was destroyed in 1935, to this day only the bell tower of 1716 has been preserved. In 1992, the building of the bell tower was transferred to the Ukrainian Greek Catholic Church, where today services are held every day.