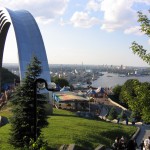 The Arch of Friendship of Peoples 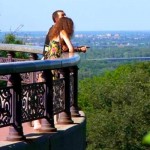 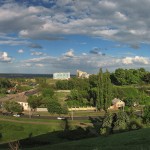 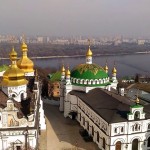 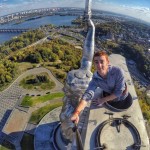 View from the Motherland

– The Arch of Friendship of Peoples – or, as the Kyivites call it “Rainbow”, was opened in 1982 and is timed to celebrate the 1500th anniversary of Kyiv. The arch is made in the form of a rainbow, uniting parts of the composition together. In addition, the place where the Arch of Friendship of Peoples is located attracts tourists and locals not only as a historical landmark, but also as a viewing platform with a view of the Dnipro and the left bank of the capital. And in the evenings it glows with bright lights.

– Mariinsky Park – was earlier called “Tsarsky”, where parades were held. The founder of the park is considered to be the Empress Maria Alexandrivna, wife of Alexander II. Arriving after the coronation to Kyiv and following the European and Petersburg’s fashion of laying out parks. Empress Maria ordered at the place of the palace square and the military parade-ground to lay out the park in English style. Also, the name of the park is associated with the name of another tsar’s lady, Maria Fedorivna, the wife of Emperor Alexander III, who lived in Kyiv for 2 years, organizing hospitals and sanatoria for the wounded during World War I. Here Maria Fedorivna learned about the abdication of the emperor and was sent into exile. So far, the opinions of historians differ about the person who named the park and the palace of the same name. Next to the palace is located a specific platform from which you can admire the Dnipro River and the left bank of the capital.

– The Park of Eternal Glory – was founded as a garden in 1894 on the initiative of Anosov, the commandant of the Kiev fortress Lieutenant-General of Artillery and it was called Anosovsky (Commandant’s) garden. In 1919, it was ordered to make a cemetery of “victims of counter-revolution” on the spot of the garden. In 1956, it was decided to recreate the park in this place. The Eternal Glory Memorial was built at a height of 27 m, the Alley of Heroes was laid, where 35 soldiers were buried. The Eternal Flame burns at the foot of the obelisk. Every year on May 9 thousands of people come here to honor the memory of the heroes of the war. There is a museum of the Holodomor, a monument on the grave of the Unknown Soldier in the park. A magnificent view of the Dnieper and the left bank of the capital are also represented here, because newlyweds like to come here to make a wedding photosession.

– Pechersk Bell tower – bell-tower of the Kyiv-Pechersk Lavra, erected in 1731-1745. It is an octagonal four-tier baroque tower with a gilded dome and reaches 96.5 m in height. It is worth noting that the design itself is inclined at 62 cm in the northeast direction. The clock on the fourth tier of the Lavra bell-tower has reached present day since 1903. In 2015, after the restoration works, the bell tower was opened for a visit. Now everyone can go up to the third tier, thus having overcome 374 steps. From the viewing platform, located at an altitude of 32.6 m, a panoramic view of the entire territory of the Kyiv-Pechersk Lavra, the Dnipro, the Right and Left Bank.

– The Motherland – was opened in 1981 on the Victory Day and it is included in ten highest statues in the world, whose height is 102 m. The statue symbolizes the feminine principle, the strength of the spirit of the Ukrainian people and it was established on the slopes of the Dnieper so that it can be seen even in remote areas of Kiev. Today it is the largest sculpture in Ukraine, and it is included in the “Guinness World Records Book of Ukraine”. There are two elevators and observation platforms, with an impressive view of the city in the monument. One site is located at the feet of the statue at a height of 36 m (the height of a 12-storey building), the other – at a height of 91 m (from the back of the shield above the fingers of the left hand of the sculpture). You can see a magnificent view on the Dnieper river, Lavra, Pechersk and the rest of Kiev from a bird’s eye view. The Museum of Ukraine in World War II is locted at the foot of the monument.