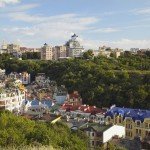 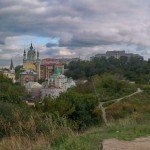 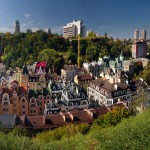 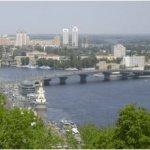 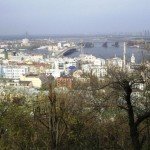 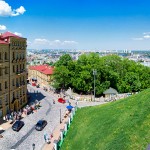 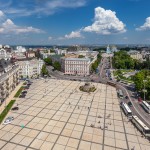 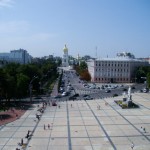 – The St. Andrew’s Church – built by the order of Elizabeth the Empress as part of the Kiev royal residence, consisting of the Mariinskyi Palace and the palace church in 1749–1754 in the Baroque style designed by F.-B. Rastrelli. The temple is built on a steep spur of the Ancient Kiev Plateau, which served as a pedestal for the construction of the church. At this point, according to the chronicle “The Tale of Bygone Years”, in ancient times the mountain on which now the church stands was surrounded by the sea. Predicting the foundation of a large city, in the 1st century AD Andrew the First-Called the Apostle set a cross, and the water mysteriously retreated. According to a legend, now the church closes the underground sea, which can only be awakened by a bell ringing, triggering the second world flood. That is why, the bell tower was not built in the St. Andrew’s Church. Because of the location on the top of the hill, the church territory offers a panoramic view of the Andriivsky Descent and Podil.

– The St. Mikhael’s Bell tower – bell-tower of the St. Michael’s Golden-Domed Cathedral, built in the late 1990’s. The three-tier bell tower was completely reconstructed from the photographs of the original bell tower, built in 1716-1720 and destroyed in the 1930s. In the bell tower there is a museum of the history of the St. Michael’s Monastery and its architectural ensemble. Here you can see ancient icons and frescoes, hand-written gospels and the preserved Royal Gates (forged doors of the 12th century). On the second floor of the lower tier, the Three-Sainted Church is consecrated. On the bell-tower there are modern clock-chimes and a unique bell-tool carillon, which allows performing complex melodies. At the very top of the Mykhailivska bell-tower there is an observation deck, from which the point of view exceeds the height of the terrace of the Volodymyr Hill. From here you can see the Dnipro and part of the Left Bank. The bell-tower is open to everybody. Requiring payment.