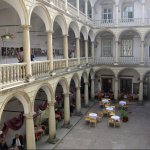 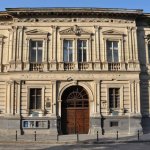 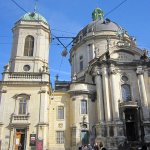 3.Museum of the History of Religion

4.The Museum of Ethnography 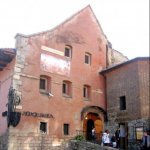 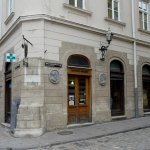 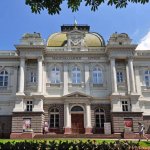 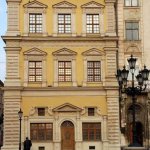 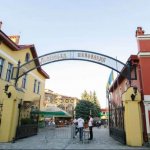 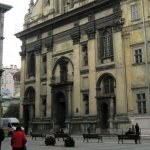 10.Dungeons of the Jesuit Church

1.Royal Chambers – an exposition in the building of the Korniakt Palace (16th century). In the XVII century the mansion was the residence of Jan III Sobieski. Today, in four rooms located on the 2nd floor, you can see interiors in the late classicism style – floors made of various types of wood, exquisite marble stucco moldings, antique mirrors, a fireplace and chandeliers. The halls were supplemented with items of the 16th-19th centuries. The courtyard houses a famous Italian (Venetian) courtyard.
Address: Rynok Square, 6
Contacts: +38(032)297-53-67
Work hours: Mon-Sun from 10:00 to 17:00. Wednesday – day off.

2.The Lviv Art Gallery – one of the largest museums in Ukraine, established in 1907. Since 1914, it has been housed in the Lozynskyi mansion (XIX century), where today the department of the “European Art of the XIX-XXI centuries” is located. The collection of I. Yakovlevych formed the basis of the museum fund. Here are the works of graduates of the Vienna, Munich and Paris academies. In addition, you can see paintings by Russian, Hungarian and Polish artists of the early 20th century. Of particular interest are the canvases of the famous Ukrainian artist M. Boichuk. The department of “European art of the XIV-XVIII centuries”, located in the Potocki Palace (M. Kopernik St., 15), deserves special attention. The halls on the 1st floor reproduce the palace interiors. The second floor displays a rich collection of works of world and national art.
Address: V.Stefanyk st., 3
Contacts: +38(032)261-46-47
Work hours: Tue-Fri from 11:00 to 17:00, Sat-Sun from 10:00 to 18:00. The day off is Monday.

3.Museum of the History of Religion – located in the premises of the Dominican Church (XIV-XVIII centuries). This is the only museum in Ukraine that contains materials on the history of religions. It covers such topics as: religions of the ancient world, Christianity, the Greek Catholic Church, the Armenian Church, Orthodoxy, etc. The fund has about 50 thousand exhibits. A collection of icons (XVI-XIX centuries) and a collection of Bibles (including a Bible from 1581) are of historical value. Organ music concerts are held in one of the halls.
Address: Muzeyna Square, 1
Contacts: +38(032)235-61-00
Work hours: Tue-Sun from 10:00 to 18:00. The day off is Monday.

4.The Museum of Ethnography and Arts and Crafts – one of the largest and unique museums of its kind in Ukraine, located in the building of the former Galician savings bank (an architectural monument, XIX century). The funds of the museum are a real treasury, which contains collections of works of decorative and applied art of Europe from the 15th – early 20th centuries. Here you can see ceramics, dishes, furniture, porcelain and textiles. A special place in the exposition is occupied by a collection of watches (XV-XIX centuries), a unique collection of masterpieces produced by the Meissen manufactory (XVIII-XIX centuries).
Address: Svobody ave., 15
Contacts: +38(032)297-01-57
Work hours: Mon, Wed-Sun from 12:00 to 17:30. The day off is Tuesday.

6.Pharmacy Museum – was created in 1966 on the basis of the oldest pharmacy in Lviv, founded in 1732. It is dedicated to the history of pharmaceuticals. Here you can see old cash registers, containers for storing medicines, pharmaceutical scales, measuring instruments, old prescription journals and more. The museum has a collection of medical books, for example, the Galen textbook (1788) and the German edition of the pharmaceutical dictionary (1778). Inside, an alchemy laboratory has been recreated. There is a cellar and a patio too.
Address:Drukarska st, 2
Contacts: +38(032)272-00-41
Work hours: Mon-Sun from 10:00 to 18:00.

7.National Museum named after Sheptytskyi – one of the most significant museums in Ukraine, founded in 1905. Today, it houses the most complete collection of Ukrainian sacred art of the 12th-18th centuries. The museum contains icons (XIV-XVIII centuries), manuscripts (XI-XVI centuries) and paintings (XVIII-XIX centuries). Here you will find valuable works by famous, world renown Ukrainian artists, such as the works of T. Shevchenko and M. Boichuk. The collection of folk art items of the 17th-20th centuries, as well as fine art of the 19th-20th centuries deserves special attention.
Address: Svobody ave., 20
Contacts: +38(032)235-88-56
Work hours: Tue-Sun from 10:00 to 18:00. The day off is Monday.

8.Postal Museum – located in the building of the Bandinelli Palace, where in 1629 the first post office in Lviv was established. The exposition of the museum is located on the first floor and occupies three halls, which reflect the history of the development of postal business in Galicia during the 17th-19th centuries. Among the exhibits, you can see rare things, such as old travel chests, mail bags, the first postcards and other items that were used by postmen in their work.
Address: Rynok Square, 2
Contacts: +38(032)235-83-34
Work hours: Tue-Sun from 10:00 to 18:00. The day off is Monday.

9.Museum of beer “Lvivarnia” – opened in 2005 on the occasion of the 290th anniversary of the founding of the Lviv brewery, the buildings of which are included in the list of cultural values of UNESCO. Lvivarnia is a modern museum complex with a total area of 2000 sq. m., where you can get acquainted with the process of beer production, see old tools, barrels and books on brewing (XIX century). In addition, guests will be able to watch a film about the emergence of the Lviv brewery, visit the tasting room and a souvenir shop. From the museum you can get to the pub located in the former beer dungeons.
Address: Kleparivska st, 18
Contacts: +38(032)294-80-65
Work hours: Mon-Sun from 10:00 to 19:00.

10.Dungeons of the Jesuit Church – the ancient dungeons of the garrison church of St. apostoles Peter and Paul (17th century). Here you can see the remains of buildings from the princely times (XIII century). On the arches, frescoes that decorated the elements of the structures (17th century), have been partially preserved. The floor is paved with bricks, the manufacturing technology of which was used in the XII-XV centuries. A unique find is a carved alabaster sarcophagus of the 18th century, intended for Archbishop N. Vyzhytskyi. One of the main mysteries of the dungeon is the tunnel, which stretches along the entire building.
Address: Teatralna st, 11
Contacts: +38(032)235-76-76, +38(067)671-42-16
Work hours: Mon-Sun from 11:00 to 20:00.