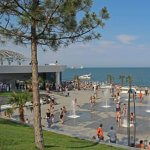 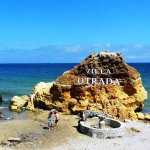 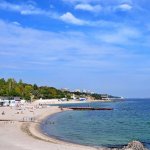 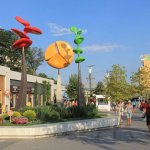 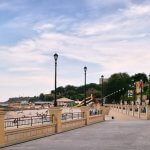 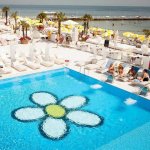 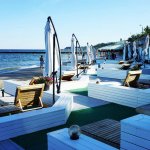 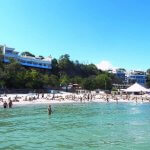 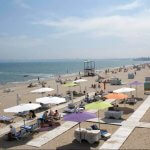 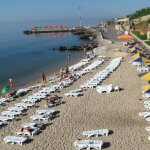 Langeron – a famous city beach in the center of Odessa, named after Governor-General Alexander Langeron. Since the end of the XIX century, the beach has become a popular holiday destination among the townspeople. Due to its proximity to the city center, it is the most visited beach among holidaymakers. You can get to Langeron from the center through the Shevchenko park. Before the entrance to the beach there is an arch, built in 1830. Once there was the summer residence of the governor Langeron, and the arch itself served as the main entrance. Today this preserved object is an architectural monument. Langeron Beach, as before, remains the most popular one, with a developed infrastructure, a lot of entertainment, cafes and restaurants. Nearby, there is the best in Ukraine Dolphinarium “NEMO”.

Otrada – one of the most popular beaches in Odessa, located near the city center, immediately after the Langeron beach. The beach is sandy, fairly clean, admission is free. It is mostly popular among youth. Otrada is the only where you can get not only by stairs, but also along the cable car connecting French Boulevard with the beach. Travel time is 5 min. Tennis courts, entertainment venues, cafes and restaurants, as well as a yacht club are located near Otrada.

Dolphin – one of the city’s beaches in Odessa, located near the center (Shampansky Lane). Dolphin is popular among locals, young people and families with children. It offers clean sandy beach, free admission, as well as a deck chairs and umbrellas rental. You can get the by the stairs next to the Champansky Lane. However, it is better to come back by getting on the elevator from the “Magnolia” sanatorium. The beach area is connected with the elevators by a 200-m long tunnel, lined with a mosaic of fairy-tale characters. A colorful or, as Odessa’s inhabitants call it, – fairytale tunnel has long become a highlight of the city.

Arkadia – the most popular resort area of Odessa. It appeared in the XIX century and is named after the greek mountain region. Due to its location and gentle slope to the sea, Arcadia has become a favorite leisure place among citizens. Today it is here that the best beaches, summer cafes, restaurants and nightclubs, as well as entertainment for every liking are located. Its territory houses water park, rides, souvenir shops, boutiques and some food places. In the evening, you will see a light and musical fountain, which has long been a decoration of Arcadia. In the warm season, famous “Ibiza” and “Ithaca” disco are open here, where mega bright parties, shows, and concerts of both Ukrainian and foreign stars take place. You can get to Arcadia from Langeron along the Health Track or by tram No. 5, which runs from the city center.

Gold Coast – one of the most popular beaches on the 16th station of the Big Fountain, located 15 km from the center of Odessa. The area is known as the Kovalevsky dacha. A 300-m long Golden sandy beach has got a convenient entry into the sea, sports and playgrounds, water sports, cafes and restaurants, which make the Gold Coast a favorite vacation spot. Nearby there is a pedestrian zone – the embankment, decorated with fountains, sculptures and flower beds. Walking along the promenade, you can admire the picturesque views and make amazing photos.

Ibiza – the most famous beach resort in Arcadia. During the daytime, it works as a comfortable VIP-class beach complex with recreation areas offering couches, sofas, 3 swimming pools, and a sandy beach with sun loungers and umbrellas nearby. It has got a bar and a restaurant. Restaurant menu features Japanese and European dishes. At the bar you can order various drinks and cocktails. There is a hookah menu too. Here, any food and drinks will be delivered directly to your spot. In the evening, Ibiza becomes the best in Odessa concert hall and nightclub, with the brightest shows, DJ sets, as well as Ukrainian and foreign musicians performers.

Riviera Beach – located at the 12th station of the Big Fountain and is one of the most popular beaches. Gradual sandy beaches, a variety of services and entertainment will help you not only enjoy the beach holiday, but also experience maximum comfort. There is a restaurant on the beach, as well as a bar, swimming pool, pavilions and vip boxes. Nearby there is paid parking. Entry to the Riviera Beach is chargeable. With your daily pass you get to use a shower room, a chaise lounge, a mattress and an umbrella.

Chaika – a beautiful beach at the 10th station of the Big Fountain (near the Maristella hotel). Its main feature is an unusual pier with a pond inside. There is a convenient entry to the beach and access by transport – no descents, climbs or steep stairs. The beach is sandy and is located between the long piers. It has a smooth entry into the sea. Access to the beach is free. On the territory there are showers, locker rooms, as well as sun beds and umbrellas rentals. There are also cafes and restaurants. You can get to the beach from the center by tram number 18.

Luzanivka – the beach on the outskirts of the city (around the village of Kotovske). This is a fairly new beach, although the largest one (1.4 km). A special feature of Luzanivka is the natural beach and the open sea, therefore there are no breakwaters and piers. Along the beach there stretches the park, where locals love to have picnics. Recently, the beach began to gain popularity. Lots of discos, restaurants and bars appeared. There are also an amusement park, playgrounds and water activities. Prices in Luzanivka are affordable. The beach opens a beautiful view of the center of Odessa.

Sauvignon Beach – one of the cleanest sandy beaches, located in the elite cottage settlement of the Ovidiopolsky district near Odessa (18 km from the center). Here the sea is clean, shallow and quick to warm up. Almost all the beaches here are chargeable. The popular beach complexes here are the “Sunrise” and the “Bora Bora.” Fans of yachting can enjoy the Sauvignon Yacht Club located on the resort territory. Also the territory of the residential area houses shops, restaurants, cafes, entertainment for children, spa-salons, hotels and paid parking. The Sauvignon can be reached from Odessa by tram №27.