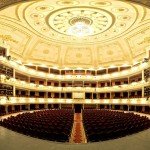 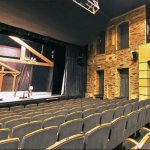 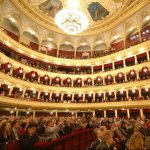 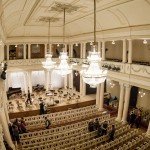 – Lesia Ukrainka National Theatre – opened in 1926 and is located on the Bohdan Khmelnytsky Street, occupying the building of the former Bergonie Theatre (1870s). At one time in the walls of the theatre there were well-known theatrical troops, Italian opera singers toured, demonstrations of films were held. Today the theatre is one of the most popular theatres of the capital. The performances take place on three stages – “Main Stage”, “New Stage” and “Stage under the Roof”. Many performances enjoy great success among the audience – namely “No. 13”, “Indian Summer”, “Mistress Minister”, etc. The theatre takes an active part in the International theatrical festivals, both in Ukraine and abroad. On the stage of the theatre play L. Yaremchuk, T. Nazarova, D. Babayev, L. Kadochnikova, V. Saraykin, O. Savkin and many other famous actors.
Address: B.Khmelnytsky str., 5
Contacts: +38(044)234-42-23

– Kyiv Academic Young Theatre – was founded in 1979 and is located on the Prorizna Street in the former profitable building Hryhorovych-Barsky (1870’s.). The founder of the theatre is the outstanding theatrical philosopher and practitioner, the director and educator Les Kurbas, who headed the youth studio back in 1917. Nowadays the Young Theatre still gives the audience extraordinary performances that differ in various styles, forms and themes. For example, the performances “Uncle Vanya” and “Matchmaking on Goncharovka” became the hallmark of the theatre. On the stage of the Young Theatre play well-known Ukrainian actors – A.Vertynsky, S.Boklan, L.Rebryk, T.Yatsenko, D.Surzhikov, K.Kysten. Many of them we know from movies – it’s “Servant of the people” (S.Boklan, K.Kisten), “Major” (A.Vertinsky), “Island of unnecessary people” (D. Surzhikov), etc.
Address: Prorizna str., 17
Contacts: +38(044)278-73-92, +38(044)234-62-51

– National Opera of Ukraine – founded in 1867, located at the intersection of B. Khmelnytsky and Volodymyrska streets in a historical building – a monument of architecture (1890s, architect V. Schreter). At the beginning of XX century it was the theatre with the largest opera stage in tsarist Russia (width 34.3 m, depth 17.2 m, height 22.7 m) and was equipped with the latest technology. Yes, so firmly that the reconstruction was needed only in 80 years later. During its lifetime on the stage sang great Italian singers, the legendary F. Shalyapin. There is also a notorious page in the history of the theatre. In 1911 during the performance Prime Minister of Russia P. Stolypin was mortally wounded. Until today, the National Opera of Ukraine gives the audience the beauty of opera and ballet art. The productions “Natalka Poltavka”, “Turandot”, “The Marriage of Figaro” and others are very popular. The operas are performed in French, Italian, Russian and Ukrainian.
Address: Volodymyrska str., 50
Contacts: +38(044)235-26-06, +38(044)234-03-53

– National Philharmonic – was founded in 1863 and is located near the European Square in a historical building (1882, architect V. Nikolaev). It was originally built as the House of Merchants’ Assembly, where balls, family celebrations, charitable lotteries, literary and musical evenings took place. One of the organizers of the Philharmonic Society in the 1850s was M. Lysenko, who left a bright mark in the activities of the Philharmonic. Today, the Hall of Columns is named after him. In the history of the Column Hall of the Philharmonic, such world figures as L. Bernstein, F. Shalyapin, S. Rakhmaninov, M. Rostropovich gave concerts. Today the philharmonic society includes not only folk and honoured artists and artists of Ukraine, but also laureates of international and national competitions.
Address: Volodymyrsky descent, 2
Contacts: +38(044)278-16-97