The Jewish monuments in Kyiv 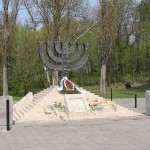 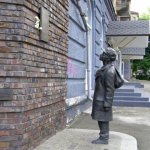 The monument to victims of Babyi Yar 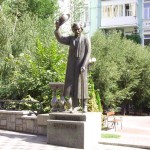 The monument to Sholom Aleichem 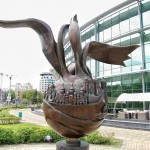 – The national historical and memorial reserve “Babyi Yar” – is a world-famous place for mass shootings of the population, mostly Jews, conducted by German troops during the occupation of Kiev. In 1870 some part of Babyi Yar became Lukyanovka cemetery, which is a protected area nowadays. In 1891-1894 a new Jewish cemetery was founded next to Babyi Yar. In 1937 it was closed, and during the Second World War it was destroyed. During the fascist occupation, Babiy Yar was used to carry out mass shootings. According to various sources, more than 100,000 people were shot there. Today it is a national historical and memorial reserve.

– The monumet to victims of Babiy Yar – located at the corner of the Petropavlivska Str. and Kyrylivska Str.. It is dedicated to the tragic events of 1941 – massacre, which was described in the novel-document “Babiy Yar” by an author-eyewitness Anatoliy Kuznetsov.

The monument is a sculpture of a boy (the character of the novel) in a coat and with a bag behind his back reading the German decree on the wall of the house: “All Jews of Kyiv and its suburbs should appear on 29th September, 1941 at 8 am at the corner of Melnyka and Dehterivska streets” … ” every Jew, who will not fulfill this order will be found elsewhere and will be shot … “.

Next to the German decree on the wall there is another inscription: “In order the past doesn’t happen again, have the courage to look him in the eye – the whole truth in the novel-document of Anatoliy Kuznetsov.” The monument was installed in 2009 near the house where Anatoliy Kuznetsov lived.

– The monument to Sholom Aleichem – was installed on the Rognedynska Str., 3 in honour of the famous Jewish writer. In a narrow coat and with a cane Sholom-Aleichem greets every passer-by, holding his hat high above his head. The monument of the writer stands on two steps, on which his name is written in Ukrainian and in Yiddish.

Not far from the monument on the Velyka Vasylkivska, 5 there is a museum dedicated to the creative work and life of Sholom Aleichem in Kyiv. At this address the writer lived in 1896 -1903. This was the time of his active creative activity. Here he wrote “Menachem Mendl”, “In a small world of small people”, some short stories from “Tevye the Milkman”.

– Sculpture “Eternal Kyiv” – is a bronze sculpture dedicated to Hetman Ivan Mazepa. It was installed in 2009 on the Dniprovskyi Descent, 1 near the Park of Eternal Glory. The creator of the composition is the world-famous Israeli sculptor Frank Maisler. The monument represents itself a ball, framed by reliefs of cathedrals, built on the funds of I. Mazepa. The dove hovers over the ball, which symbolizes the unity of the left-bank and right-bank Ukraine.