Parks in the Old (Upper) city of Kiev 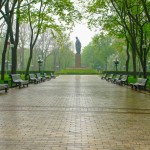 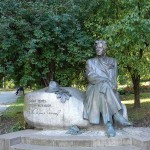 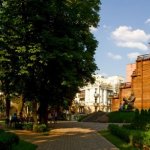 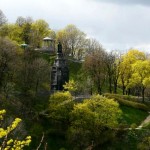 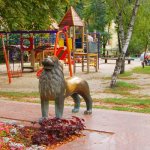 – The Shevchenko Park – the most romantic and beloved park of citizens, laid in the 1860’s in front of the university building and was named University Park. In 1869 a monument to Nicholas I was erected in the center of the park, and the park itself was renamed Nikolayevsky. In 1939 on the site of the monument to Nicholas I in the center of the park a monument to Taras Shevchenko was erected. The park began to bear the name of T.Shevchenko. In 1972, the park was given an environmental status. Street musicians perform here, and in the summer they dance. There is a restaurant on the territory of the park. Although the park is small, it is a favorite place for Kyivans and guests of the capital.

– Oles Honchar Square – nice and pleasant place in the center of Kiev, surrounded by quiet cozy courtyards. The square was located in a well-known historical tract, which was named after Sviatoslaviv Yar, mentioned in “The Tale of Life” by K.Paustovskyi and in “The Tale of the Fleeting Years” by M.Ushakov. There is a monument to Oles Honchar, sculptures made of wood and a fountain, as well as many shops located under thick willows. The monument to Oles Honchar the famous Ukrainian writer and public figure was opened in May, 2001. In the summer, freshness and coolness reign here.

– Zolotovoritskyi Public Garden – a small public garden at the exit from the metro station “Golden Gate”. Due to its location, the park as a landmark has long ago become a popular meeting place. Here is situated one of the main sights of the capital – the Golden Gate. The square was laid out in the XIX century. In 1899 there was installed a cast-iron fountain in the form of a vase for fruit, preserved to this day. Also in the square there is a monument to the Grand Duke of Kyiv Yaroslav the Wise. At the exit from the public garden there is another interesting figure – the bronze cat Panteleimon. If you pat it, then your finances necessarily multiply. In summer, the cafe works at the fountain. Street musicians often play in the park.

– Volodymyrska Hill Park – is one of the most popular places among citizens and guests of the capital. The park is in its own way a unique landscape of landscape art. The park is divided into three levels. The upper one is on the same level as the St. Michael’s Cathedral, on the middle level there is a monument to the Grand Duke Volodymyr the Baptist, the lower level extends along the foot of the mountain from the European Square to Podil. From the top of the park opens a magnificent panorama on the left bank of the Dnipro. There is also a famous arbour for lovers, in which couples like to sit down and watch the sunsets. Also in the park there are different sculptures – works of Kyiv masters of the 1990’s. Near the park there is a funicular that connects the upper part of the city with Podil.