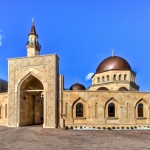 – Ar-Rahma Mosque – is the first and only muslim mosque in Kiev, which means mercy. It is built next to the old Muslim cemetery, which is not operational nowadays. The construction was started in the mid-1990s on the money of the Muslim community. The solemn opening of Ar-Rahma Mosque was only in 2011. The architecture of the mosque and 27 meters high minaret attract with its beauty and unusualness. There are library, women’s room, training classes, playgrounds, Sunday school and hobby groups on the territory of the mosque. There is a relic in the mosque, that is a copy of the fabric scroll, where the names of all spiritual leaders of Sufism are written.