Museums in the Old (Upper) city of Kiev 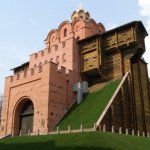 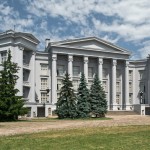 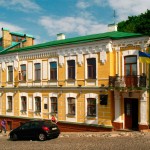 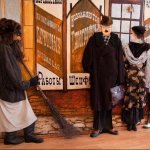 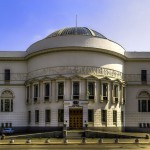 The Pedagogical Museum of Ukraine

– Museum “Golden Gate” – the only gates that have survived since the times of Kyivan Rus. This oldest defensive structure of Kyivan Rus served as the main gate of ancient Kyiv, and today it is a symbol of the capital and one of its main sights. The Golden Gate appeared in the time of Prince Yaroslav the Wise and is mentioned in the annals of 1037. Today the Golden Gate is a pavilion-reconstruction, inside of which you can see the original ruins and collect in your mind the image of an old building. The last reconstruction was carried out in 2007, during which the surviving parts of the gate, which had been preserved since the time of Yaroslav the Wise, were restored. The museum displays expositions about the history and architecture of the Golden Gate. If you come from Zolotovoritska Street and look inside through the iron hertz, you can consider the remains of ancient pylons of different lengths (east – 24 m, western – 13 m), laid out in ancient Byzantine technique “opus mixtum”. Also preserved fragments of the rivets, made in the masonry technique of the 11th century. These are traces of fortification structures that appeared after the deformation of the walls and arches after attempts to storm. Climbing the stairs to the very top of the structure, you can go to the observation deck and admire the view of the square and the nearby streets of the capital.
Address: Volodymyrska str., 40-a
Contacts: +38(044)278-45-44, +38(044)278-69-19
Work time: Tue from 10:00 to 17:00, Wed – Sun from 10:00 to 18:00, Mon – a day off.
The museum does not work in winter.

– Bulgakov House – the famous literary and memorial museum of the capital today. The house itself was built in 1888 due to the project of N. Gordenin, a Kiev architect, and the customers were the merchant family of Litoshenko (the mansion was intended for the owner’s wife). One and a half floors of the building were built of stone, the top wooden floor, was bricked, the roof was covered with iron. Within some time, several buildings were added to the main building, the new owner of the estate of four houses became Z.Mirovych, a merchant and a personal honorary citizen of the city. All the buildings were leased, and the apartment on the first floor was the most expensive. In 1906, the tenants of this apartment became the family of Afanasy Bulgakov the Professor of the Kiev Theological Academy, renting an apartment on the first floor. So, from 1906 to 1919 years the world-famous writer Mikhail Bulgakov lived and worked in the Building No. 13 located on the Andriivskyi Descent. The house wasn’t different from neighboring ones for many years. But in 1967 in the popular magazine “New World” of that time was published an essay by Viktor Nekrasov, a Kiev writer of “The House of Turbins”. That’s right, Kievans began to call the Building No. 13 by the name of the fictional Bulgakov literary heroes, the Turbin family. Today it is the only museum in the world where Bulgakov’s relics are collected. The decision to create a literary-memorial museum of Mikhail Bulgakov was made in 1989. Only in 1993, the museum began to be visited. Today it’s not just a building, it’s a Legend-House.
Address: Andriivsky Descent, 13
Contacts: +38(044)425-31-88
Work time: Mon, Tue, Thu – Sun from 10:00 to 18:00, Wed – a day off.

– Museum of One Street – the first private museum in Kyiv, whose collection is dedicated to the history of St. Andrew’s descent and its inhabitants. For the exposition were used items from the turn of the 19th century and the beginning of the 20th century. Getting here, plunging into a nostalgic atmosphere, as if travelling by the time machine. The museum was founded in 1991 in the room of the old house 22-b. Crossing the threshold of the museum, you get into the atmosphere of the last century. Here you can imagine what the boudoir looked like with a full set of ladies’ toilet items, a dining room with a table, interiors of workshops and shops. In the museum, retro music plays, which gives exploration to the realities of the past. The museum amounts more than 6 thousand exhibits – old photographs, engravings, ladies’ dresses, umbrellas and hats, men’s tuxedos and cylinders, gloves, handbags, playing cards, banknotes, phonographs and cutlery, American typewriter, National cash register – evidence of a bygone era. The museum has many rare autographs and books – original manuscripts and photographs of Vertynsky, Bulgakov’s novel The Days of the Turbins (1927) and his Therapeutic Directory by Dr. M. Schnirer. The collection of the museum is dedicated to the history of the Andriivsky Descent and to its famous inhabitants – M. Bulgakov, H. Tyutyunnyk, M. Grabovsky, A. Muraviev, F. Krasitsky and many other figures of science and culture, whose names are not only praised Kyiv, but all Ukraine. In the museum there are exhibitions and interesting projects, for example, which are dedicated to famous women: Edith Piaf, Marlene Dietrich, Claudia Shulzhenko, Evit Peron. Posthumous masks of famous people are exhibited. Well, a real excitement of the public was caused by an exhibition dedicated to the public houses of the Andriivsky Descent. In 2002 The Museum of One Street became the first member of the European Museum Foundation from Ukraine. On the eve in Luxembourg, the results of the prestigious international competition “The Best European Museum of the Year” were announced. Bypassing eminent competitors from Italy, Greece, among the winners was a small Kyiv museum from Andriivsky descent.
Address: Andriivsky Descent, 2-b
Contacts: +38(044)425-03-98
Work time: Mon – Sun from 12:00 to 18:00.

– The Pedagogical Museum of Ukraine – built in 1911 by the architect P. Aleshin, located on the Volodymyrska Street, 57. Initially, there were organized lectures, conferences, meetings of scientists from different countries. Until 1915, the museum could be visited free of charge. In 1917, the Central Rada of the UNR, led by M.S. Hrushevsky, began to sit in the building, the monument to whom is located near the building. On the 7th November , 1917 in the museum was opened Ukrainian Academy of Pedagogical Sciences. Soon the Ukrainian State Academy of Arts started its work here. The school of pilots, the voluntary White Guard squad, the Revolution Museum and the Kyiv Regional Executive Committee were also located here. In 1934 the museum was reorganized into the Kyiv City Teacher’s House. Since 1937 to 1982 here was the Lenin Museum. Since 1982 and to this day it functions as a Teacher’s House. Also here are the State Scientific and Pedagogical Library named after V.A. Sukhomlynsky and choreography college. The Pedagogical Museum works is up to date. The exposition of the museum will tell about the development of education and pedagogical knowledge in Ukraine for the period from ancient times to 1945 and later.
Address: Volodymyrska str., 57
Contacts: +38(044)234-36-88
Work time: Mon – Fri from 10:00 to 17:00. Break from 13:00 to 14:00. Sat, Sun – by agreement.