Murals in the Old (Upper) City of Kyiv 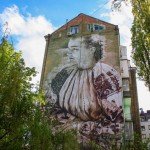 Mural on the Striletska Street, 28 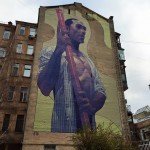 Mural on the Velyka Zhytomyrska Street, 6-A 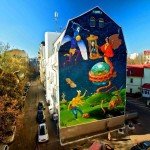 Mural on the Striletska Street, 6 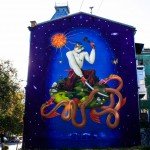 Mural on the Velyka Zhytomyrska Street, 38 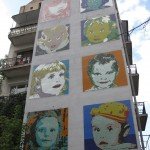 – Mural on the Striletska Street, 28 – created in 2015 within the framework of the art project “City Art” by the Australian artist Guido van Helton. The Ukrainian poetess Lesya Ukrainka was represented in the picture. The mural occupies the wall of a 7-storeyed building. In the picture young Lesya Ukrainka in vyshyvanka looks thoughtfully into the distance. The picture is decorated with a branch of lilies of the valley. It was the poem “Lilies of the valley” about young lady and torn flower, written by a poetess in 1884, inspired the artist to create a picture. According to the author, he learned about the poetess from his friends and connected the story of the lily of the valley with the image on the wall.

– Mural on the Velyka Zhytomyrska Street, 6-A – was created in 2015 within the framework of the art project “City Art”. The author of the work is a Spanish artist, known under the pseudonym Aryz. In the picture depicted a man in an unbuttoned shirt with a stick in his hands.

– Mural on the Striletska Street, 6 – created in 2014 by famous Ukrainian artists Volodymyr Manzhos and Olexiy Bordusov. The work entitled “The Time of Change” was carried out under the influence of such events as the annexation of the Crimea and the war with Russia in the Donbas region.

– Mural on the Velyka Zhytomyrska Street, 38 – created in 2014 by famous Ukrainian artists Volodymyr Manzhos and Olexiy Bordusov and locates at the end of the Landscape avenue. The patriotic graffiti entitled “Ukrainian Saint George” reflects the historical moment of the struggle of the Ukrainian people for freedom and independence. In the middle of the composition is a Cossack warrior with the head of a falcon who fights with a serpent. The falcon warrior embodies the image of the people of Ukraine, and the serpent personifies the evil and misfortunes that struck the Ukrainian land. The picture occupies 150 sq.m.

– Mural on the O. Honchar Street, 15/3 – was created in 2010 by sculptor Kostiantyn Skretutsky. It consists of 8 different coloured mosaic portraits of children and is called “Happy Childhood”. According to the author, the mosaic depicts real children, some of them children of his good acquaintances.