Murals in Podil of Kiev 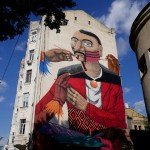 Mural on the Spaska Street, 6-a 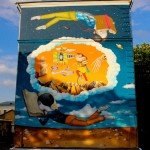 Mural on the Hryhorii Skovoroda Street, 2 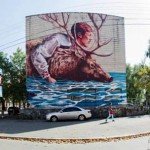 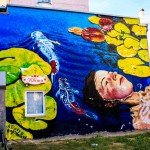 Mural on the Kostiantynivska Street, 56 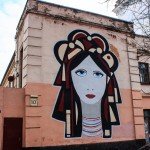 Mural on the Borysohlibska Street, 10-a

– Mural on the Spaska Street, 6-a – was created in 2015 by the famous Brazilian avant-garde artist Francisco Rodrigo da Silva, known as Nunca. The picture unites Ukrainian and Brazilian cultures. The picture depicts a Ukrainian Cossack, on whose face and neck was applied a make-up with ornaments at once by a few dark-skinned hands. In the process of creating a mural, there was a conflict with the residents of the house who were against the appearance of a picture on the wall of the building, arguing that the house is more than 100 years old and it is an architectural monument.

– Mural on the Hryhorii Skovoroda Street, 2 – was created in 2013 by artists Seth (France) and Waone from the duet “Interesni Kazki” (Ukraine). Mural is located on the central square of the Kyiv-Mohyla Academy. Graffiti reflects the true value of knowledge. Two children, reading books, travel in other worlds and meet a wise man who balances in the air (a symbol of knowledge). On the bright ribbon you can see the inscription “Life without science – death”. This maxim is symbolized by the traveler and two hands in the middle of the composition.

– Mural on the Voloska Street, 19/22 – was created in 2015 by the Australian artist Fintan Magee. In the picture we see an image of a man and a deer. Mural is devoted to the theme of preservation of the environment and is called upon to draw public attention to the problems of ecology.

– Mural on the Kostiantynivska Street, 56 – was created in 2016 within the framework of the art project “Art United Us”. The author of the work is the Ukrainian artist Anastasia Belous. In the picture is depicted a young girl who, in a state of rest, swims in the pond next to two Koi carp (English Koi), and around her there are water lilies. The meaning of the work is to convey to people a sense of beauty, calmness, harmony between nature and the world.

– Mural on the Borysohlibska Street, 10-a – was created in 2016 by artist Olha Rondiak (Ola Rondiak). In the picture is depicted the face of a Ukrainian young woman with a pensive and a bit sad look. Drawing female portraits, the artist embodies the face of the new “free” Ukraine.