Murals in Pechersk of Kiev 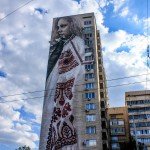 Mural on the Lesia Ukrainka Boulevard, 36-a 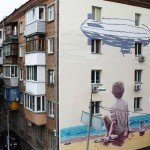 Mural on the Moskovska Street, 36 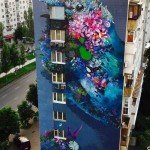 Murals on the Lesia Ukrainka Boulevard, 5 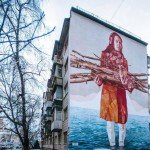 Mural on the Husovskogo Street, 10/8 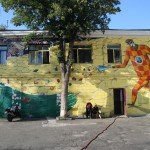 – Mural on the Lesia Ukrainka Boulevard, 36-a – was created in 2015 and is dedicated to the beauty of Ukrainian women (the author is an Austrian street art artist Guido Van Helten). On the mural under the name “The Girl in Vyshyvanka” is depicted a Ukrainian girl in the national shirt, looking thoughtfully into the distance. A huge picture is placed on the wall of a 16-storeyed dwelling house at Pechersk.

– Mural on the Moskovska Street, 36 – was created in 2017 by the artist Rustam Qbic within the framework of the art project “Art United Us”. On the mural, titled “Boy and the Sea”, a boy sits by the sea with a tassel in his hand and looking at a flying airship.

– Murals on the Lesia Ukrainka Boulevard, 5 – was created in 2016 by the American artist Ernesto Maranje within the framework of the project “Art United Us”. On the mural entitled “Bird Made from Flowers” there is a fairy bird, decorated with bright colourful flowers. The author’s idea was to draw public attention to the problems of war, information zombies and propaganda.

– Mural on the Husovskogo Street, 10/8 – was created in 2015 by the Australian street art-artist Fintan Magee. The idea of the author is to draw humanity’s attention to the protection of the environment and the current problems of ecology. Mural “Climate change” depicts a girl standing in the water, who holds branches of trees in her hands. This paper is devoted to the problem of global warming in the world.

– Mural on Lavrsky Lane, 9 – was created in 2010 by a team of Ukrainian artists Interesni Kazki & Lodek within the framework of the art-street festival “Kyiv Muralissimo”. The facade of the administrative building of the gallery “Lavra” was decorated with a surrealistic drawing- a running man in a checkered suit with cones in his hands.