Fortifications in Pechersk of Kiev 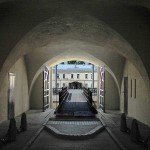 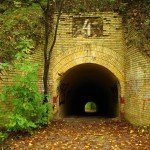 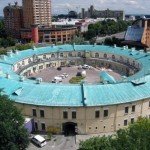 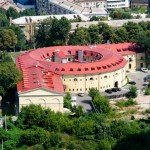 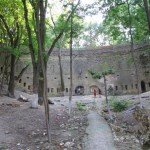 – Hospital Fortification “Oblique Caponier” – a part of the architectural complex “Kiev Fortress”, it is a semi-underground construction. There are embrasures and loopholes, as well as guns that are represented on the perimeter of the caponier. The fortification was erected in 1844. It includes the defensive structure “Oblique caponier”, located at an angle to the earthen rampart of the fortress. There is also the northern half-tower, the northern gate with a caponier, a military hospital with a tower, a caponier of 1-3 polygons in the hospital fortification. They all preserved to this day. It is considered to be one of the world’s largest preserved stone-earth fortresses and the second largest in the world.

– Lysohorsky Fort – is one of the fortifications of Kyiv, part of the New Pechersk Fortress, located on the historic site – Lysa Hora. Since 1872, after the buy-out by the city authorities of the territory, the construction of the Lysohorsky Fort of the New Caves Fortress was started here. The fort was surrounded by a dry moat, surrounding earthen ramparts (up to 12 m high), tunnels were bricked. Its barracks could accommodate several thousand of soldiers. The size of the fort was up to 800 m in depth. But the fortress was involved in no one war. And since 1897 the fort was transformed into military warehouses and a garrison prison. In the1930s here was built a secret tank repair plant. During the German occupation, the factory was used by the Germans – it housed the German tank base “Tiger”. Today the remains of the Lysohorsky Fort are a monument of military-defense architecture and are part of the Kyiv Fortress Museum.

– The Round Tower – the tower №2 of the Vasylkivsky fortification, which is part of the complex of the Kyiv fortress. In 1833 three other similar objects began to be built at Pechersk. Among them, the most famous is Tower № 2 on the Lesia Ukrainka Boulevard, although the official address of the tower is Konovalets Street, 44. The tower was intended for a battalion of garrison soldiers. This two-storeyed monumental structure with a small courtyard – a parade-ground, with narrow embrasures on the outer wall. The windows of the barracks faced the inner courtyard of the tower. Since 1863 a number of tower rooms were used as a political prison. In 1897 on the external facades instead of loopholes and embrasures were made windows. Remains of the battle rampart, which was a closely adjacent to the tower preserved to the present day. Today the tower houses restaurants and offices.

– Klovsky Tower – built in the middle of the XIX century on the highest point of the city – on the Klovska Hora as an object of the New Pechersk fortress. Tower №5 was a part of the complex of defensive structures in Kyiv to protect the northern slope of the Pechersky Upland and created a serf front from the Klovsky Yar. The tower was combined with other structures with the help of ramparts and defensive brick walls. The Pechersk fortress had no analogues in Europe and was a mighty fortification, although throughout its history the fortress was involved in no one war. In 1897 in the tower placed warehouses and a garrison prison, loopholes were blocked up, and instead of them, window slots appeared. During the Soviet era, the Ministry of Defense used the fortress as a military warehouse, nowadays here house different offices.

– “The Green Theatre” – built on the ruins of a fortress in the middle of the XIX century. During the fortification of the Pechersk fortress, two support walls for the ravine were built, which was located between the metro station “Arsenalna” and the Mariinsky Park. The upper retaining wall has not military significance, while the lower one closed the access to the Mykolaivsky chain bridge, guarding the Podilski Nikolski Gates. From the water tower, as well as through the lower and upper supporting walls, passed an underground passage leading to the Arsenal plant, connecting workshops and a water tower. Inside the retaining walls are galleries and gun loopholes. In 1949 at the base of the upper wall, a cinema was built for 4000 seats. Today the theatre is in an abandoned state. Sometimes there are night discos and performances of various youth musical groups. Most of all this place is liked with young people of informal and alternative movements because of the legends about ghosts and mystical cases.