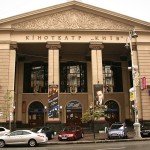 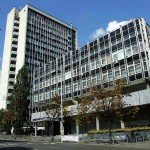 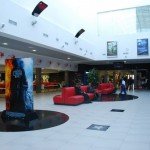 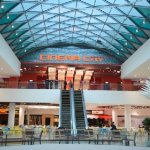 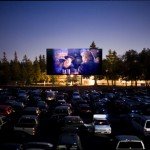 – «KYIV» – opened in 1952, became one of the largest entertainment establishments in the city. The cinema had two halls for 525 seats each and a third small hall for 250 seats. Special acoustic plaster, which increased the purity of sound appeared there for the first time. After the reconstruction in 2000 the cinema acquired a new name – the cultural center “Cinema Kyiv”. Thanks to new solutions, “Kyiv” has become one of the country’s best cinemas. International and all-Ukrainian festivals, special projects, exclusive programs, retrospectives, as well as film premieres with the participation of national and world cinema stars take place there. In 2007, the cinema was accepted into the international organization EUROPA CINEMAS, an international network that includes the best cinemas in Europe, Latin America, Asia and the French-speaking countries of Africa.
Address: Velyka Vasylkivska str., 19
Contacts: +38(044)234-33-80

– «House of Cinema» – a legendary building, built in 1974 in the style of Soviet futurism. For a short time, the “House of Cinema” has become a real cultural centre and is so until the present days. Today there are exhibitions and festivals, seminars and conferences, demonstrations of authors’ films, as well as the best jazz concerts of Ukrainian and foreign stars. This is one of the few places where you can see the experimental cinema of young Ukrainian filmmakers. Here also houses the National Union of Cinematographers of Ukraine. Inside work the restaurant-club “Babylon”, a cafe, a bar and a library.
Address: Saksahanskoho str., 6
Contacts: +38(044)287-75-57

– «Oscar» – 6-hall cinema, located in the shopping mall “Gulliver” on the 7th floor. This is the most modern cinema in the capital – spacious halls equipped with Dolby Atmos sound system, comfortable chairs, cosy waiting rooms, popcorn bar and Hitchcock bar. There is a VIP hall for 46 seats, whose visitors have the opportunity to call the waiter of the Hitchcock bar and order any drink or dish from the menu that will be served directly to the hall.
Address: Sportyvna Sq., 1-a
Contacts: +38(044)364-06-10

– «Cinema City» – 8-hall cinema, located on the 3rd floor of the shopping mall “Ocean Plaza”. The cinema complex covers an area of up to 4,000 sq.m. and can accommodate up to 1,500 spectators simultaneously. In “Cinema City” you will not be forced to wait long, since the sessions here begin every 15 minutes. The cinema is equipped with modern digital equipment – 3 halls with 3D technology, demonstration of laser films in the 4K format, there is a VIP hall for 18 seats and 3 bars (cinema-bar, fresh-bar and popcorn-bar).
Address: Antonovycha str., 176
Contacts: +38(044)230-7-230